Can You Ever Forgive Me? [2018] – A Surprisingly Poignant True Story of a Literary Forger 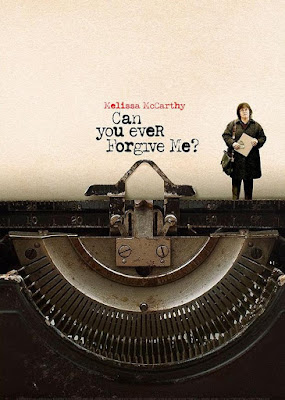 In Marielle Heller’s fact-based drama Can You Ever Forgive Me? (2018), American actor Melissa McCarthy dons a serious dramatic avatar that allows her to be much more than a ‘wild-and-crazy fat girl’ going through the Hollywood comedic routine. Apart from her role in Bridesmaids (2011), Melissa’s choice of projects (gross-out slap-stick comedies) not only underused her supposed talents, but also made us question if she could ever shine in a role which doesn’t involve foul-mouthed crude shenanigans. Now her mercurial performance as real-life author Leonore Carol ‘Lee’ Israel casts aside such doubts. Furthermore, what’s interesting about Melissa McCarthy performance here is the way she uses her inherent comic persona to suit the needs of the role than assuming a superficial doleful expression.

Based on Lee Israel’s 2008 memoir of the same name, Can You Ever Forgive Me is adapted to screen by Nicole Holofcener (‘Enough Said’) and Jeff Whitty. Lee Israel, an openly gay best-selling celebrity biographer in the 1970s and early 1980s, finds herself to be ostracized in New York literary world of the 1990s. The reason doesn’t have to do with her sexual orientation, but due to alcoholism and irascible, misanthropic behavior. The narrative opens at 1991, when 51-year-old Lee Israel, in dire financial straits, loses her latest job. She is behind on rents and couldn’t pay the veterinarian bills to continue treatment for her sick cat, which happens to be the only trusted companion left in Lee’s life. Her interest in writing biographies of obscure subject doesn’t secure any big advances. Lee’s agent Marjorie (Jane Curtin) has stopped returning her calls and on one occasion when Lee blasts through Marjorie’s office, the elderly woman advises Lee to be less difficult and, if possible, to choose a different profession (“You can be an asshole when you’re famous”, quips Marjorie). 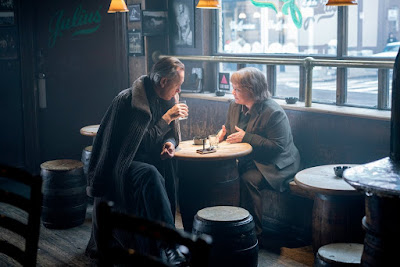 Undismayed, Lee continues researching for her biography on Fanny Brice in the library. In one library book, she finds some letters written by the famous vaudevillian herself. Lee ‘takes’ those letters and sells it at a local book shop for some money. Since the letters’ content wasn’t that fascinating, she only receives little money. But Lee founds that there is a thriving market for celebrity memorabilia, particularly signed letters. Soon, she amasses old typewriters and begins her career in forgery. Lee cooks up witty letters and fakes signatures to sell it as the rare letters from literary figures/celebrities like Dorothy Parker, Noel Coward, Marlene Dietrich, etc. (she forged nearly 400 letters until she was trapped by the FBI). Lee also takes in an accomplice, a flamboyant and homeless fifty-plus con-artist Jack Hock (Richard E. Grant). Jack is gay like Lee, and the two outcasts develop a better rapport.  However, questions of authenticity raise red flags among the celebrity-obsessed, memorabilia-selling community, and the FBI begins to investigate this middle-aged cat lady. 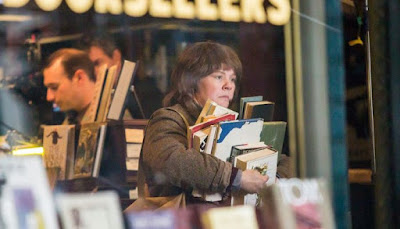 If distilled to its basic elements, ‘Can You Ever Forgive Me?’ is less a character study of an uncordial author and more of a warm buddy drama and crime caper. Director Heller establishes that Lee isn’t a very likeable character from the very first scene. Writers Holofcener and Whitty doesn’t allow their central character to get off easy with ready-made excuses. The scene Lee meets up with her ex, Elaine (Anna Deavere Smith) in order to get some reassurance, was very well-written. Elaine with a touch of raw honesty reveals how hard it is to put up with Lee. The narrative also includes a romantic subplot, involving Lee and a modest bookseller, Anna (Dolly Wells). Lee’s fear of commitment is evident in her growing ‘friendship’ with Anna. But the problem is that these revelations just stay as that. These exchanges aren’t elaborated upon to provide some insight upon Lee’s psyche. It’s obvious the film isn’t about how a fiercely independent and creative person gets roasted by the larger community. The narrative hints at the loneliness, frustration, and frailties that simmer beneath the central character’s fierce pride. Hence the film would have been more memorable if the writers had given Lee Israel more field of depth. And of course, Melissa McCarthy’s empathy-inducing performance mostly makes up for what the script lacks in depth. Moreover, Heller’s nuanced dig at the superficiality of literary world (one that so often prides itself for non-idealized notion of artists) asks intriguing questions about the limits of celebrity worship.

The crime caper element in ‘Can You Ever Forgive Me?’ is actually very slight that there isn’t much anticipation related to it. But Heller and her writers excel when focusing on part affectionate and part acidic interactions between Lee and Jack. Veteran British actor Richard E. Grant channels bit of the mendacious, roguish charm found in his screen debut, Withnail and I (1987). Grant effortlessly moves between the comedic and tragic, while maintaining viewers’ sympathy for his character despite the frustrating lows. Lee and Jack’s final meeting is such a delightfully written, staged, and acted sequence that it becomes easy to overlook some of the movie’s prior flaws (the scene is also a good example of elegant dramatization because the exchange didn’t happen in real-life). The odd moments of tenderness, which flashes out of their devilish taunts, almost portrays the two as kindred spirits. Besides, the brilliant evocation of 1990s New York atmosphere conveys a melancholic tone without sentimentalizing the situations. Overall, Can You Ever Forgive Me? (107 minutes) is a light-hearted yet rewarding tale about professional failure and loneliness, bolstered by couple of magnificent performances.

at February 12, 2019
Email ThisBlogThis!Share to TwitterShare to FacebookShare to Pinterest
Labels: 2018 Movies, Based on True Story