Under the Tree [2017] -- The Misdeeds of Resentful Suburbanites 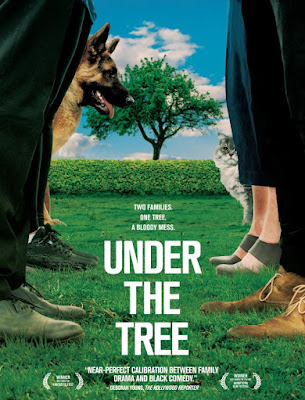 Deep-seated trauma, hostility, and misunderstanding can reduce any grown-ups into bickering children as the preventable irrationality eventually leads to terrible consequences. In Icelandic director Hafsteinn Gunnar Sigurdsson’s third feature film Under the Tree (‘Undir trenu’, 2017), we witness two dysfunctional plot-knots in which mean-spirted Reykjavik suburbanites do (and say) nasty things to each other. The film opens with the image of  a stale marriage, the couples in question – Atli (Steinpor Hroar Steiporsson) and Agnes (Lara Johanna Jonsdottir) lie in bed not facing each other, the sterile surroundings adding to their feelings of detachment. Soon, Agnes catches Atli on the verge of masturbating to a sex video, which happens to feature Atli and his ex-girlfriend Rakel (Dora Johannsdottir). Agnes accuses her husband of committing adultery though Atli says it’s an old video.

The kicked out husband/dad (the couple has a little girl) stays at his parents’ home where a different sort of dispute is going on. Atli’s mom, Inga (Edda Bjorgvinsdottir) is still grieving over her missing first son who has probably committed suicide. Atli’s dad Baldvin (Sigurdur Sigurjonsson) works as a choir director and finds it hard to offset his wife’s depression and hysterics. A beautiful large tree grows in Baldvin and Inga’s backyard, which has overgrown into the property of their neighbor, ruining the attractive and fitness-obsessed housewife Eybjorg’s (Selma Bjornsdottir) efforts to tan. Eybjorg’s husband Konrad (Porsteinn Bachmann) cordially requests Baldvin to prune the tree. But Inga who holds a grudge against Eybjorg delivers a nasty reply. What then starts as harmless pranks blows into full-fledged feud that ends with a bloodbath. 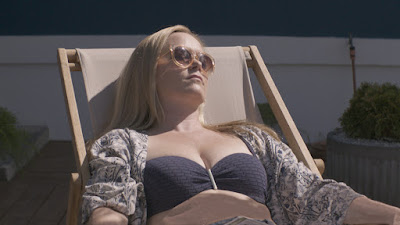 Meanwhile, Atli try to reconcile with Agnes (who continues to cold-shoulder him) and obtain the right to see his five-year-old daughter. In one hilarious apartment meeting scene, Agnes rats out Atli’s perversion in hopes of humiliating him in front of others. But the discussion largely rests on a carefree couple whose loud lovemaking causes unrest among others. Under the Tree is the kind of movie where you can easily guess how the stakes are going to be raised. You see Inga’s fluffy house cat and Eybjorg’s cherished dog, and somehow know that the escalating tensions are going to be intertwined to the pet’s lives. Kitty goes missing and Inga’s paranoia, heightened by internal turmoil regarding the unknown fate of elder son, makes her to do absurd yet vicious things. Atli perceives the dispute like any disinterested son watching his folks making a mountain out of a molehill. Nevertheless, he couldn’t serve as voice of reason since his own preposterous behavior (creating ruckus at Agnes’ work-place and taking out his daughter from kindergarten for a ‘picnic’ in the IKEA parking lot) threatens to escalate the domestic dispute.

Director Hafsteinn Gunnar Sigurdsson brings forth an oddly satisfying experience in observing the suburban individuals’ mean-streak. The elegant new-age bungalows with large glass windows serve as a kind of box (or like a museum exhibit) that displays the worst of human specimen’s behavior. The humanity depicted here is decidedly bleak and full of cynicism, albeit humorous and meaningful. Sigurdsson may not empathize enough with his characters, but he doesn’t take a position too distanced from everything he is satirizing. There are some surprises in the writing, allowing characters to display some emotional spontaneity. For instance, the moment Atli shares with his father Baldvin inside the tent, erected in the backyard. Drinking bourbon they reasonably discuss Inga’s delusions and Agnes’ confusion and righteous anger. That’s a picture of vulnerability and understanding lying beneath the often exploding emotions of resentment. Perhaps, director Sigurdsson is touch too hard on his women characters. Inga, Agnes, and Eybjorg are often rendered insufferable, their spiteful behavior mostly labelled as fuel for the men’s brutality. The animosity developed over a tree whose eventual destruction obviously serves as the metaphor for humans’ intolerant attitude and inability to co-exist. The violent conflict also accounts for the ways grief and hysteria provokes the unsympathetic tendencies within us.

For director Hafsteinn Gunnar Sigurdsson, Under the Tree is a change of pace from his two previous concise character studies, Either Way (2011) and Paris of the North (2014), although once again he employs absurdist humor as his narrative's driving force. The sub-urbanites aren’t well-drawn like Sigurdsson’s pathetic yet appealing central characters in other films. The glorious Icelandic scenery is also largely absent, hence the Reykjavik setting could be easily transplanted to US or Western Europe. The actors and their performances, however, are convincing. They bring naturalism to the heightened, cruel circumstances. Altogether, this story of humanity gone mad vibrates with palpable unease and a pitch-black sense of humor.