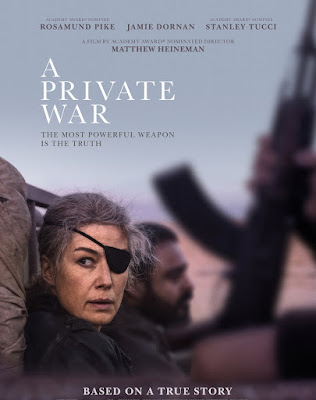 Early in Matthew Heineman’s emphatic drama A Private War (2018) we see the renegade, eye-patch wearing American war correspondent (of Sunday Times), Marie Colvin (Rosamund Pike in one of her career best roles) arriving at a glitzy event to receive an award for her stories/detailed accounts of human suffering in the front-line of war-zones around the globe. But before lionizing Colvin through the speech she gives and the applause she receives, the film-maker cuts to exhausted and inebriated Colvin picking up a fight with her life-partner. At another occasion, an enraged Sunday Times editor (Tom Hollander) calls out Marie Colvin’s obsession to shed light on human loss by defiantly putting herself in harm’s way as a kind of addiction (a diagnosis which doesn’t feel wrong). This decision to not ennoble this daring journalist’s private and public life, and further look at her achievements without filtering out psychological burdens, battlefield chaos, and human vulnerability makes A Private War one of the most engrossing account of a journalist and the state of modern warfare.

Marie Colvin worked for London’s Sunday Times from 1985 to her death in 2012 (an event the narrative ominously hints to at the start of each chapters). Colvin was killed in Homs, Syria while covering the Assad regime’s massacre of the civilians. The film doesn’t offer a typical childhood-to-death biopic, but paints a portrait of Colvin through her late career wartime endeavors. The narrative, pieced together through series of assignments Colvin took over (most of those were vehemently discouraged by her editor but were eventually lauded), deftly processes the psychology of a woman who had devoted herself to be the mouthpiece of voiceless and a witness of inhumanity. The key factor in Heineman’s treatment of Colvin’s life is that there’s no due catharsis in having watched the heroic journey. He rather contemplates the damage this life-long pursuit for nightmarish truth did to her. And he further leaves it to us to answer whether we (humanity as a whole) have learned something from these ‘casualties of war’ (“In covering war, can we really make a difference?” asks Colvin). 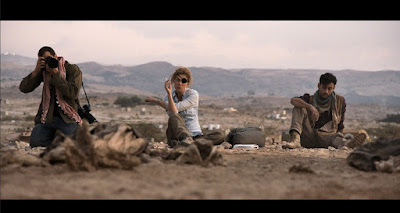 Based on 2012 Vanity Fair article “Marie Colvin’s Private War” (by Marie Brenner), screenwriter Arash Amel offers tidbits from the last 11 years in the life of Colvin. In 2001, Colvin lost her left eye while reporting from Tamil Tigers territory at the height of Sri Lankan civil war. The episodic narrative then moves onto the besieged lands of Iraq, Afghanistan, Libya, and Syria. Punctuating each of these distressing vignettes is Colvin’s life back in the first world – galas, affairs, banal workplace gatherings, etc. Furthermore with each trip the war correspondent’s mental scars grow in number and the snapshots of horrific war imagery embedded in the memory overruns her reality (the presented dreamscape is simple but adequate enough). Colvin’s PTSD starts to worsen in the late 2000s as her bad recurring dreams keeps on playing a slideshow of traumatic visuals.  Accompanying Colvin in some of the dangerous undertakings is her friend and noted war photographer Paul Conroy (Jamie Dornan). 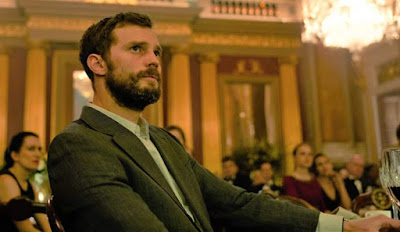 Arash Amel and Matthew Heineman neither overly dramatize Colvin’s life nor turn her into a ‘cool’ symbol of empowered women. As the title suggests the focus largely lies upon the fidgety side of Colvin’s personality, her battles with PTSD, alcoholism, and first-world apathy. Director Heineman is smart enough to lay out both the courage and the great toll it took on Colvin’s life while keeping up that courage. Although A Private War is Heineman’s first feature-film, he has already showcased his unflinching commitment for truth through his documentary projects Cartel Land (2015) and City of Ghosts (2017). Heineman has firsthand knowledge of what it means to be the messenger of truth at the personal cost of trauma (bullets have rained down on him while covering the Mexican drug war and Syrian civil war). Hence Heineman views Colvin as a kindred spirit. Consequently, he casts aside the myth and heroics piled upon her persona to deeply look at the raw emotional pain, brokenness, and anxiety she put up with to confront the worst of humanity. Like Colvin’s resonant words, Heineman ponders on the human loss made possible by day-to-day geopolitical games played in the insensate power corridors.

In the wrong hands, Marie Colvin could easily be branded as the white savior who 'cared' about brown-skinned people. But director Heineman constantly hints at Colvin’s privilege and ruthlessly examines her fixation to shed light on the ugliness of war. Moreover, Pike does an excellent job in embodying her character’s internal battle. Pike employs bit of dramatics to showcase Colvin’s mental instabilities and sudden fits of rage. But she’s super-subtle in scenes depicting Colvin’s equanimity and candor during the front-line reporting duties. One such particularly subtle and powerful moment is the recreation of Colvin’s call with CNN’s Anderson Cooper from a crumbling hideout in Syria. Jamie Dornan is equally brilliant as the photographer Paul Conroy, who risked his life to record the images that matched with Colvin’s haunting words. Overall, A Private War (110 minutes) deserves credit for being more than a uni-dimensional congratulatory portrait of a journalist. It unblinkingly looks at the endurance of a human focusing on humanity in extremis.

at February 03, 2019
Email ThisBlogThis!Share to TwitterShare to FacebookShare to Pinterest
Labels: 2018 Movies, Based on True Story