South Korean cinema, in recent times, has gained a reputation for wielding intriguing political dramas. While the political discourse discussed in Korean films isn’t exactly profound or that it transcends the inherent dramatic structure, unlike the seminal, inimitable political cinema of Francesco Rosi or Costa-Gavras, the Korean film-makers doesn’t often fall for falsely reassuring cliches. And although Cold War has come to an end, the sociopolitical conflicts in the Korean peninsula is still set around the rivalry between two (equally corrupted) ideological systems as the climate of Cold war distrust still looms over the countries. This has led to plethora of high-stakes political films, where unsuspecting civilians are shown to be at the receiving end of the subtle political exploits between North and South Korea. Yoon Jong-bin’s The Spy Gone North (‘Gongjak’, 2018) is similarly a ‘behind-the-doors’ look at how the ‘powers that be’ on both sides keep in touch with each other. 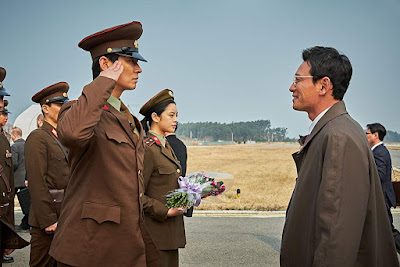 The Spy Gone North is a fictionalized account of real-life South Korean agent from the 1990s known as ‘Black Venus’, who was tasked to obtain intelligence on North Korea's nuclear weapons development. South Korea’s National Intelligence Service (NIS) makes contact with a nuclear physicist who worked in Yongbyon reactor (hub of North Korea’s nuclear program) and learns that the North is very close to refining weapons-grade plutonium at Yongbyon. To receive more information on the project, NIS section chief (Cho Jin-woong) selects Park Suk-young (Hwang Jung-min), a former South Korean military officer, to infiltrate North Korea’s political high-command. The mission begins with Park traveling to Beijing to befriend Ri Myung-un (Lee Sing-min) of the North Korea’s External Economic Commission (a Pyongyang elite who has direct connection with Kim Jong-il). Park’s military past isn’t glossed over, but he presents himself as an embittered man discharged due to his alcoholic and gambling problems. An import/export front company is covertly set up by NIS on behalf of Park and he transforms himself into a zealous businessman seeking trade deals with the North.

Unlike the Bond films, Park doesn’t easily get close to the North Korean political elites. He diligently waits for months before he receives an invitation to meet Ri Myung-un. Even then an intimidating security official of North (Ju Ji-hoon) keeps Park under constant surveillance. The incremental advancement in the business relationship and friendship between Park and Ri forms the crux of the narrative, and plays a pivotal role in the twisted political games later. The initial surveillance and counter-surveillance operations unfold in a fascinatingly detailed fashion without unnecessarily stoking the thriller quotient. Once Park through Ri gets to meet North’s Supreme Leader Kim Jong-il (Gi Ju-bong), he proposes a esoteric arrangement involving advertising shoots (an excuse to explore whole of North Korea). The North officials believe this might be the first step in dethawing the mutual animosities between the two Koreas. However, Park’s mission runs into trouble when his section chief is commanded by his superior to meddle with their nation’s elections. The line dividing the good from bad turns murkier as the narrative increasingly moves into ‘John le Carre’ territory. 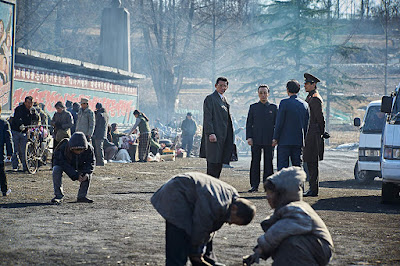 Yoon’s film is much more than a ‘spy-on-mission’ thriller. Its absorbing narrative chronicles the role of intelligence service in political manipulation; and how the deceptive tactics of the powerful (in the name of ‘national security’) can sway public opinion. Yoon shows how a shadow government (involving intelligence missions) operates behind the elected government, where values of democracy are sacrificed at the altar of power. Both allegedly enemy nations try to take advantage of the political scenarios and sway the public sentiment, whereas in secret they engage with symbiotic deals to extend their hold on power. Acquiring nuclear power and broadcasting national security threats become diverting maneuvers from confronting the much real problems of penury and enmeshed institutional corruption.  Amidst such crafty as well as clusterf**k situations, Yoon slowly develops the transformation of Park and Ri. Both the men are idealists working for the ‘greater good’. However, as the narrative progresses the men uphold basic human values; the empathy they show for each other triumphs the climate of distrustfulness. Of course, few conventional dramatic sequences are employed to depict Park and Ri’s burgeoning friendship, yet there’s enough poignancy to this narrative arc (both Hwang and Lee has done a phenomenal job in playing these characters).

Writer/director Yoon has done a neat job of conceiving two-plus hours spy feature without any violent shoot-outs. He wrings tension out of the misanthropic realpolitik decisions. Some of the set-pieces are fraught with anticipation: for instance the sequence showcasing Park’s first visit to Pyongyang. Gu Ju-bong who played North Korean Supreme leader in this particular scene did a terrific job. He perfectly captures the strangely menacing quality of the leader that’s free from caricature. The frigid, market scene was also effectively staged, offering us the rare (dramatic) peak into North Korea’s deep-seated, chronic poverty.
Overall, The Spy Gone North (137 minutes) is an unexpectedly moving and hard-hitting political drama which boldly depicts the destabilizing forces that perpetually shape the conflicts between two Koreas.