Wolfgang Fischer’s minimalist and unnerving drama, Styx (2019) opens with the image of apes roaming the parking lots and buildings of a place that’s revealed to be Gibraltar, an impeccably urbanized artificial island in the Mediterranean sea (a British Overseas Territory). Despite the paradisaical views of the island, there’s an eerie strangeness in seeing these apes not in their natural environment. From the apes, director Fischer cuts to a traffic accident, the injured motorist treated by an emergency medic in the ambulance. This emergency doctor named Rike (a robust Susanne Wolff) happens to be the film’s protagonist, who forced to face death on a daily basis decides to go on a solo, recuperative voyage in her well-equipped yacht. Her destination is Ascension Island, a volcanic island in the Atlantic Ocean, where Charles Darwin designed an artificial green ecosystem. As Rike seeks solace from human-engineered urban ‘paradise’ by fixing her sights on a human-engineered jungle ‘paradise’, trouble and distress comes her way, which pits Darwinian theme of ‘survival of the fittest’ against human compassion. 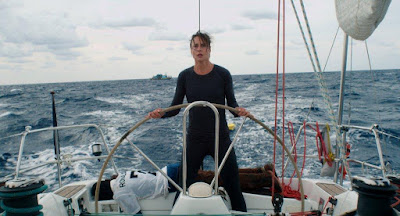 The documentary-like, dialogue-free narrative of Styx’s first-half could frustrate us. We see Rike filling her boat with supplies (abundant for a solo trek), effortlessly handling the yacht while keeping her cool throughout a fierce storm. The careful planning, ability to thrive in tough environments, and the high-end gadgets Rike surrounds herself with insinuates she could handle whatever comes her way. But what she confronts is utterly unexpected: dozens of emaciated refugees in a sinking, overloaded fishing trawler wailing for their rescue. With a yacht too small to help them and with a boat full of distressed people jumping into ocean to swim towards the yacht, the narrative turns into a morality play. The (friendly) Coast Guards, who speak English in different accents, repeatedly instruct Rike to keep her distance. But silence is the only answer they could offer when she asks when help will arrive.

Among the group of migrants who swim towards Rike, only a boy (Gedion Wekesa Odour) boards her yacht. Being an emergency worker, she swiftly attends to the sick boy. And although Rike keeps her distance from the sinking ship, a growing sense of guilt gnaws at her. Moreover, when the boy convalesces she increasingly gets in conflict with him; he insists her to rescue his family members. Since the systems in place are utterly slow to act, can a single person make a difference? Or does her presence actually make matters worse by infusing false hope? Apart from equipping the lean drama with moral quandaries, Fischer and his co-writer Ika Kunzel subtly turns it into a striking political allegory. The moving, microcosmic image of the refugee boy begging the white European to ‘do something’ speaks of the uncomfortable silence of Western world in witnessing the muffled cries of the dispossessed (the titular sacred, mythological river also provokes thought on similar lines).

Styx was mostly filmed with a crew of eight in an 11-meter yacht. They have certainly braved the unpredictable quotient of open-water shoot, while also keeping intact the tension arising out of solo sea voyage. Cinematographer Benedict Nuenfels and director Fischer has done a commendable job in unfurling the story and its emotions without lot of expositions and dialogues. Susanne Wolff’s subtly emotive and physical performance has allowed the film-maker to preserve his narrative’s understated quality. There’s no backstory to Rike, but Wolff remarkably establishes the character’s motivation, her inner torment through few piercing looks. The abrupt, simplistic ending does dilutes the effect the film has on us. Nevertheless, Styx (94 minutes) is memorable for the thoughtful and compassionate way it deals the morally challenging and politically sensitive subject.

at September 29, 2019
Email ThisBlogThis!Share to TwitterShare to FacebookShare to Pinterest
Labels: 2019 Movies