Zoology [2016] – A Strange Yet Endearing Tale of Personal Growth

“My view of modern society is quite pessimistic”, says the young Russian film-maker Ivan I. Tverdovsky, whose two feature films are about individuals being harshly persecuted by the society for being themselves and expressing their feelings. If the Russian helmer’s debut feature Corrections Class (2014) revolves around a pretty, differently-abled 11th grader Lena (has myopathy and bounded to a wheelchair), his sophomore effort Zoology (2016) tells the tale of shy, lonely fifty-something Natasha. Despite the protagonists’ difference in age and place in their society, director/writer Tverdovsky’s focus lies upon the individuals’ awakening and spurt of non-conformity that’s squashed down in a cruel, spiteful manner. The interesting aspect of Tverdovsky’s compact story lines is that it works as a specific commentary on Putin’s Russia, while on a broader note it also delivers a piercing critique on general perceptions of gender, sexuality, and darker human impulses. 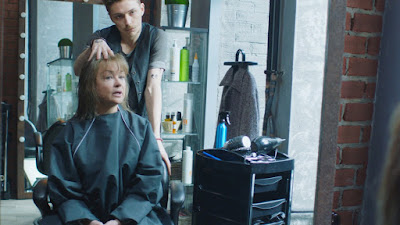 Zoology (Zoologiya) is one weird dramedy which amalgamates Soviet cinema’s social realist tone (aka ‘Russian miserablism’) with Cronenbergian body horror elements. The result is a well-balanced contemporary fable, boasting strong emotional anchor to support the tale’s unorthodox idea. The film opens with 55 year old Natasha (Natalya Pavlenkova) standing still at the center of whitish atmosphere. It’s as if she is dead and floating on the clouds to reach heaven. But no, she is just standing within the confines of her drab administrative office, overlooking the sea and overcast sky. Natasha is the procurement manager at a zoo and as she stands motionless, her chatty colleagues gorge upon the latest juiciest piece of gossip. Unexpectedly, Natasha faints and falls to the floor. It seems our middle-aged protagonist expresses more emotions when she looks at caged animals. She is the butt of her rumor-mongering co-workers’ jokes (their idea of bullying includes filling her desk drawer with pack of rats). Moreover, Natasha’s compliance is fiercely sought by the boss, especially when it comes to buying sub-standard foods for the animals she loves.

Life is drab at home too. Natasha hides her smoking habit from religiously orthodox, domineering mother (Irina Chipizhenko) and their relationship is painted in shades of grey. After the earlier fainting episode, Natasha experiences great deal of pain in the back and discovers that she has grown a tail. She goes to a doctor, who orders her to take an X-ray. The doctor and Natasha treat the tail growth with matter of fact-ness, similar to the Kafka’s matter of-fact presentation of the bizarre events in ‘Metamorphosis’. Despite the initial pain and inconvenience of the tail, Natasha soon finds that this physical anomaly has its boons too. She finds a way to use her phallic tail to pleasure herself in a scene in the bathtub. Most importantly, the appendage puts her under the gaze of Petya (Dmitri Groshev), a handsome young radiographer. He is actually attracted to Natasha because of the tail. His unwavering attention brings upon an emotional and sexual awakening, as Natasha tries new hairdo, cut short her long skirts, and goes wild on a dance floor. Meanwhile, rumors float amidst the residents of sea-side town about a shape-shifting devil which has possessed a local woman. Gradually, Natasha’s desire for self-empowerment is threatened by society’s penchant for mundanity and conformity. ‘What if a woman grows a tail?’ might be the central bizarre question that sets off the narrative. But eventually, Zoology uses the improbable occurrence to understatedly put forth this question: what if a woman seeks a new lease of life? That’s what makes Natasha’s life journey believable, memorable, and irrevocably sad. 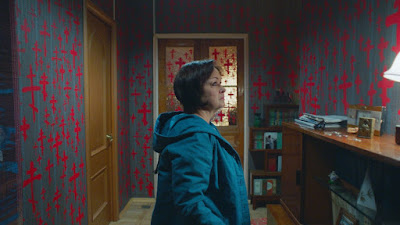 Similar to contemporary Hungarian film-maker Gyorgy Palfi’s weird stories of transition, Tverdovsky's unique and strange intentions in Zoology explores the imposed limits of human desires and interconnectedness. The narrative also boasts the quiet confidence to make it work on a sociopolitical level too (as an allegory on the absurdities and disillusionment in Putin’s regime; Palfi’s movies also doubles up as allegory on life in authoritarian Hungary). Director Tverdovsky fascinatingly makes the limits not just figurative, but literal. Natasha’s life near the sea hints at her existence at the edge. The sea clearly shows she has nowhere to go, and the only transition possible is internal or physical. The caged animals in the provincial town’s small zoo further highlight her grim isolation.

Tverdovsky’s film-making style is as muted as Natasha’s initial mindset. Earlier, he frames her in static shots, making her look unassuming and small; she's yet another colorless object in the drab surroundings. Tverdovsky shifts to handheld camera and observational documentary approach, when Natasha slowly discovers her own sense of self. In the scene Petya guides her up the slope to playfully slide down using a large aluminum basin, the camera gets closer to Natasha to intimately catch her belated adolescent blossoming. One of the great achievements of the movie is the effortless way it evokes nervous laughter and emotional discomfort at the same time (for eg, the ‘zoo cage’ scene). At some point, it becomes clear that Zoology is not headed for upbeat ending. Yet the empathy it shows for the ostracized protagonist persuades viewers to watch it till the end. And, Natalya Pavlenkova perfectly wears the physical oddity and provides deeper understanding of her livelier character. Regardless of whether one can dissect the story’s obscure metaphors or not, Natalya’s performance adds a poignant touch to the proceedings.

Zoology (90 minutes) uses an uncanny element to neatly explore a repressed woman’s emotional upheaval. Utilizing absurdist humor and stark realism in equal measures, it showcases the cost of being ‘different’.