When religion rejects pluralism and kowtows to predefined set of rules, allowing no space for discussion, then the ensuing orthodox establishment tends to weave rigorous control over its followers, and pits one against the other. Normally, the word religious extremism brings to mind ISIS soldiers, cloaked in black and carrying a black flag parading the streets of some long-forgotten, bombed-out Middle-East country. But religious extremism or stern orthodox beliefs are confronted at all levels of community, regardless of the country’s overt peaceful status. Israeli film-maker Emil Ben-Shimon’s The Women’s Balcony (Ismach Hatani, 2016) deals with onset of religious extremism within a serene Israeli, working-class community, where the moderate number of congregants go to their synagogue with an air of jubilation and festivity, rather out of fear.  The film opens on a narrow street with a well-dressed young woman coming out of a house, carrying a dish container. Soon, we see group of men and women joining her, and they move rapidly through the narrow, stone-paved alleys, bearing infectious excitement before reaching their small synagogue. 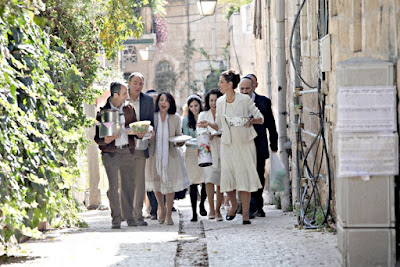 The Women’s Balcony was written by first-time screen-writer Shlomit Nehama who says she grew up in a similar religious yet buoyant community. She effortlessly imbues an authenticity to the characters and their conversations flow naturally. Particularly, the female characters are written in an impassioned, believable manner that’s reminiscent of Pedro Almodovar and Nadine Labaki’s films. The chief characters of the narrative are: Ettie (Evelin Hagoel), a religious but independent middle-aged woman; and her loving husband Zion (Igal Naor), an active member of the small community. The joyous gathering at the synagogue is for Zion & Ettie’s grandson’s bar mitzvah (Jewish coming of age ritual). The women in their formal attires elatedly watch the ritual from their section, a balcony. Elderly Rabbi, Menashe (Abraham Celektar) conducts the proceedings in an easygoing manner. The turmoil then begins through visible structural damage. The women’s beloved balcony caves-in and the accident puts Rabbi’s wife in a coma.

The old rabbi is in shock and the men of the congregation move to a temporary place, although the new setting makes it difficult for them to bring at least 10 men to fulfill their worship (a quorum of ten Jewish adults are required for performing religious service, known as ‘minyan’). But one charismatic, smooth-talking young Rabbi, David (Aviv Alush) brings his loyal students and takes charge of the prayers. The four men of the tight-knit community, including Zion, confess their misfortune to Rabbi David. They show him the collapsed temple, and David promises to help them rebuild it. The men easily fall for the young Rabbi’s courteous sermons. Although the Rabbi doesn’t deliver firebrand speech, he slowly and surely injects his extreme orthodox beliefs. He ‘soulfully’ explains why it’s an honor for women to keep them a little out of sight, covering their head with scarves. When Zion buys a scarf as present for Ettie, she vehemently protests. Furthermore, adding to the women’s growing frustration is that the rebuilt synagogue doesn’t have a balcony. An adjoining, claustrophobic space in the back is assigned for them. More alarming is how the new Rabbi’s cascading idea wedges rift between the people’s unity. Hence, the women decide that it’s time to rebel. 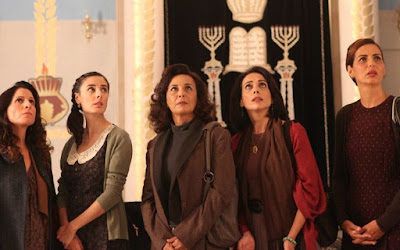 The Women’s Balcony was a biggest hit at Israeli box-office which is understandable. It’s interesting to see how a country that thrives in different areas of technological industries also has this dilemma over women’s place in its religious lifestyle. Of course, this isn’t a political movie, but only a light-hearted dramedy. Yet, the narrative offers brilliant insights on the aforementioned dilemma without demeaning or angelicizing the characters. Even though the specificity of the rituals may baffle those not familiar with Judaism, gradually we could see universality in the character’s dynamics and concerns. We could easily feel the agony of these once-happy congregants reduced to wretched state and also their sharp anger on the annoying Rabbi, spouting out-dated religious rhetoric. Moreover, thanks to Shlomit Nehama’s well-attuned script, the narrative expertly focuses on each characters’ worries and foibles, extracting humor and poignancy in equal measures. The story line has all the ingredients to devolve into preachy drama, but each narrative moment is well-grounded in genuine human emotions.

Ben-Shimon perfectly juggles between the tones, avoiding the use of stereotypical behavior for the sake of few more laughs. He also uses the real Jerusalem locations with ingenuity, setting the character relationships and exploring the themes through carefully calibrated atmosphere (for example, Zion and Ettie are early framed closely by doorway or window, but with young Rabbi’s arrival this changes, but at the end we once again see the couple snuggling at the doorway). The performances from the large ensemble cast were nothing short of amazing. Although Evelin Hagoel’s turn as introspective & determined Ettie wholly attracts our attention, Aviv Alush as hate-inducing David was equally good. His minimalistic style of acting never transforms the character into a cardboard villain. May be, we could find some fault with the pat and very predictable ending. But it’s hard to be not overwhelmed by the movie, which takes a very complex theme and produces an entertaining fare with rich, memorable characterizations.

Altogether, The Women’s Balcony (96 minutes) is a heartfelt & feel-good story of a vibrant community’s reawakening.