A Good Wife (‘Dobra Zena’, 2016) marks the directorial debut of Serbian star Mirjana Karanovic who was best known for her roles in Emir Kusturica’s films (‘When My Father Was Away on Business’, ‘Underground’, ‘Life is a Miracle’) and for playing the central character in Jasmila Zbanic’s ‘Grbavica’ (2006). Karanovic also brilliantly plays the titular role in A Good Wife, a docile 50-year-old matriarch named Milena. Karanovic’s Milena is a mother of three, comfortably living under the care of her husband Vlada, (Boris Isakovic), a well-to-do contractor. She spends her day cleaning their Belgrade suburban house, taking care of college-going son Milos (Jovan Belobrkovic) and high school-going daughter Katarina (Isidora Simijonovic), and enjoys the occasional gathering with her husband’s war buddies and their life partners. Milena’s quotidian yet peaceful life is ruptured when she’s diagnosed with breast cancer (beautifully touched upon in the opening scene as she wistfully sits in front of a mirror, topless and examines her breasts). But soon a much bigger conflict overwhelms Milena. While undertaking the usual spring clean of the house, she stumbles upon her husband’s military uniform and a VHS tape, which contains more than the old footage of their family’s joyous gathering. 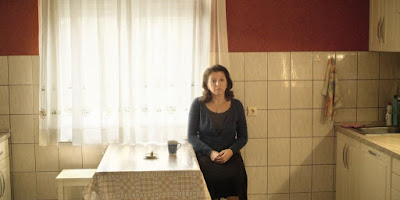 Apart from acting and directing, Mirjana Karanovic has also co-wrote the script with Stevan Filipovic and Darko Lungulov (Filipovic has directed Karanovic in 2015 dramedy ‘Next to Me’, whereas Lungulov has directed the actress in 2009 drama ‘Here and There’). The trio has written it as an intense character study rather than a thriller. The ‘cancer’ metaphor is especially employed in a sensible way without mining it for melodrama. Earlier in the narrative, Vlada seems unsettled by the news debate, where an activist remarks that former Serbian soldiers should be extradited and charged for war crimes in the Hague Tribunal. In the VHS tape, Milena discovers Vlada, in full paramilitary attire, and his buddies brutally executing civilians in the Yugoslav Wars (1991 – 2001). Milena passively watches the views of talking heads in the news, but she is visibly distressed by her husband’s war activities, so much that she doesn’t watch the video fully.

Natasha (Hristina Popovic), Milena and Vlada’s independent, art-loving eldest daughter deepens the good wife’s inner conflict. Natasha has stopped talking with her father because of her works with Belgrade human rights organization and for looking beyond the rosy glow of their nation’s war history. On one hand, Milena’s growing closeness with Natasha makes her to question Vlada’s inhumane acts, in the name of war. At the same time, being aware and taking action pushes Milena into panic because it would bring unprecedented transformations to their lives. Should Milena be the proverbial ‘good wife’ and endure, preserve husband’s dirty secrets? Or should she do the ‘right’ thing and in due course ruin their family unit? It’s fascinating to see how Karanovic and her co-writers find parallels between the personal and societal cancer that’s disturbing Milena’s composure. The doctor after suggesting immediate surgery says, “We'll do reconstruction, everything will look the same”. We know the ‘reconstruction’ following the cleansing of ‘cancers’ aren’t going to be the same.

The symbols conjured may seem a bit convenient and unsubtle, but Karanovic’s performance and direction perfectly infuses the emotional beats. The slow shift in Milena’s emotionality is gracefully suggested. Karanovic builds the narrative out of interesting, little moments: the naturalistic chatter between mom and daughter; through awkward, non-erotic sexual encounters between Milena and Vlada; the calm sequence when Milena wakes up early in her house, takes the car to do what she feels right. In one memorable scene, Milena serves snacks to her husband, daughter, son and their friends who are deeply involved in discussing politics, education, etc. Milena, no longer wanting to remain passive, says something sensible but in a little harsh tone. The others are baffled, not by what she said or by the tone she assumed; it’s due to the fact that this acquiescent woman has opened her mouth to voice out an opinion. And Karanovic is uniformly phenomenal in playing the dutiful wife troubled by her conscience (as stunning as she was in ‘Grbavica’). Her towering presence smooths out the little rough edges that are evident with Karanovic the film-maker.

Overall, A Good Wife (90 minutes) is a straightforward yet endearing tale of motherhood, post-war society, truth, and reconciliation embellished by good writing and impressive ensemble cast.

at October 02, 2019
Email ThisBlogThis!Share to TwitterShare to FacebookShare to Pinterest