One of the flaws that contribute to black-and-white American movies’ outdated nature is its tenuous character sketches of the central players: women remain chaste, obedient, and wholesome; men are gentle, strong-headed, and achievers. But the black-and-white movies in the classic Hollywood era haven’t always relied on gender stereotypes. While there has been numerous film-makers who have campaigned against strict American censors, there was also daring film-makers who thrived before censorship guidelines was set forth in mid 1930s. Pre-Code Hollywood era brought upon few strong female characters who didn’t mask their sexuality or succumb to the masculine power. The array of allegedly nefarious depictions in this era’s movie contained infidelity, harsh violence, promiscuity, reference to prostitution and other sexual innuendos. Gangster films like The Public Enemy (1931), Little Caesar (1931), Scarface (1932) delineated the massacres initiated by protagonist characters rather than showcase their violence as cathartic. Drama & comedies like Red-Headed Woman (1932), The Divorcee (1930), Gold Diggers of 1933, etc possessed strong female characters that fought against powers-that-be. The anarchic and unpredictable behavior on-screen unnerved the state censors, but the ticket sales only skyrocketed. The Pre-Code era mostly refers to the period between the introduction of sound pictures and strict censorship rules, shaped in 1934, popularly known as ‘Hays Code’ (it was terminated in 1968). Political and religious factions came together by the end of 1933 to bring down American cinema’s ‘immorality’ which they thought promoted bad behavior. The big studios naturally succumbed to these external pressures. 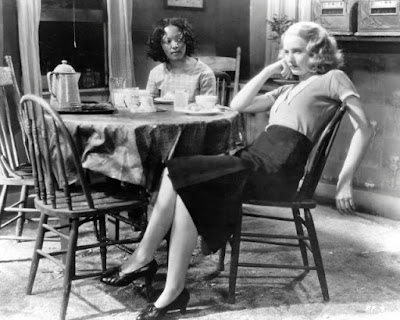 Film critics and scholars often cite Baby Face (1933) as one of the significant and controversial movies of pre-code era. It’s considered to be the last straw that propelled the higher powers to bring about censorship rules. When the Hays Code went into effect, Baby Face was pulled from the theaters and heavily censored. Set in the late 1920s with Prohibition era still in effect, Baby Face tells the story of a young woman who literally sleeps her way to the top. Even by today’s standards, the raw sexual power emitted by the great Barbara Stanwyck retains its boldness and cool efficiency. The film opens in a dead-end industrial American small-town where Lily Powers (Barbara Stanwyck) serve drink to workers in her wily father’s illegal joint. The way the workers paw her as she walks past them suggests how the father lends her for gaining ‘favors’. The only persons who don’t see Lily as mere sexual object are: Chico (Theresa Harris), African-American housemaid; and an old, intellectual cobbler Mr. Cragg (Alphonse Ethier) who encourages Lily to live as per the words of celebrated philosopher Frederick Nietzsche. Since it’s the local politician who helps Lily’s father to keep the bar open, he asks for his prize. Lily doesn’t relent and even breaks a bottle on his head. She confronts her father and says she is tired of giving herself to men (ever since she was 14 years old). This line of dialogue alongside the professor’s incendiary advice: “Nietzsche says, “All life, no matter how we idealize it, is nothing more nor less than exploitation”. Exploit yourself. Go to some big city where you will find opportunities. Use men! Be strong! Defiant! Use men to get the things you want!” makes up for some of the boldest statement made in black-and-white Hollywood cinema. 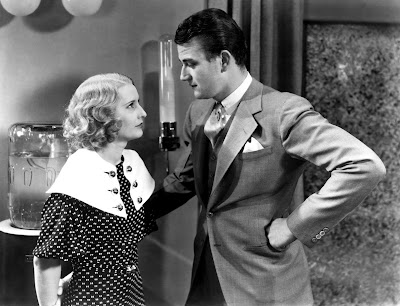 Lily’s fate changes when her father dies in an accident. She travels to Manhattan with Chico and sets her sights on Gotham Trust Bank. Starting from the position of under secretary, the shrewd Lily uses her radiant beauty to seduce men and climb up the social ladder. Twenty-five year old John Wayne plays a minor role as Jimmy McCoy, the lowly positioned young man whom Lily dumps after her inescapable gaze falls upon his boss Brody. The future all-American film star looks docile in front of the assured heroine here. Lily spends her free time reading etiquette, distances herself from female co-workers, and wears the flawless mask of purity and innocence in the men’s presence. Her effortless rise through the ranks is funnily portrayed by panning up the camera outside the bank building – from Personnel to the top most Accounting Department. Even when her actions bring upon tragedy on others, Lily doesn’t question her methods, up until meeting Courtland Trenholm (George Brent), the playboy who takes over the bank’s Presidential position. It all leads to an interesting climax where Lily isn’t punished in the familiar way as employed by most of the 40s Noir movies.

In 2004, a curator in Library of Congress stumbled upon the original print of Baby Face that’s five minutes longer than the widely circulated version (in the edited version the radical nature of cobbler’s words were also altered). The shots of men’s lusty gaze on Lily plus the risque scenes where Lily openly invites men for sex were cut out. The censored version was instilled with a false sense of morality which dilutes the complexity of Lily’s characterization. Directed by Alfred E. Green and story written by Darryl F. Zanuck (couple of years later he founded the famous studio 20th Century Fox), the movie resorts to clever sexual innuendos and subtle visual cues to delineate its alleged proto-feminist message. 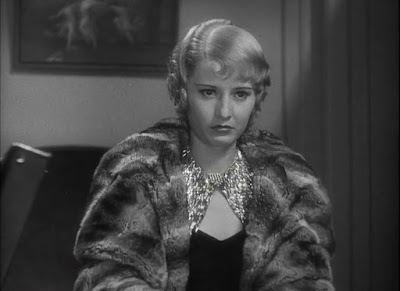 The writing exhibits admiration for Lily’s exploits as well as nudges at the utter emptiness of her pursuit of material wealth. Lily has all the characteristics of Hollywood’s archetypal ‘ice queen’, popularly dubbed as the ‘femme fatale’. The character type, well circularized in Noir cinema, was shown to be as strong-headed women who had the sheer force of will to decimate male-dominated universe. However, often in Hays Code Hollywood cinema femme fatales are eventually punished with death, their beauty equated as instrument of chaos. In Baby Face, the femme fatale protagonist is more empathized and stops just short of brutally punishing her with a lame ending. The film isn’t without flaws as there are problems with some caricatured representations of both genders and with slightly misleading interpretation of Nietzsche’s philosophy. Yet, the film’s visceral power, boosted by Barbara Stanwyck’s majestic performance couldn’t be ignored. She is much enigmatic and alluring than she was in her much acclaimed role of Dietrichson in Billy Wilder’s Double Indemnity (1944). Stanwyck effortlessly envisions her characters' emotional damage that’s reflected in the escalating actions of ruthlessness.