Based on Virginia Woolf’s novella, Sally Potter’s Orlando (1992) is a challenging as well as a slightly frustrating art-house drama. At a glance, it looks like a Merchant Ivory production or like one of those (unimaginative) costume dramas. But this aesthetically-pleasing tale of androgynous British nobleman’s fantastical exploits playfully explores the themes of gender outlooks and personal identity. Having read Virginia Woolf (although I haven’t read Orlando), it is understandable what an arduous task it might have been to adapt the intricate text into a movie. Set across four centuries of British history, the ageless gender-switching protagonist’s emotional journey doesn’t have a conventional narrative arc. Yet Sally Potter’s prodigious visual achievement alongside Tilda Swinton’s intoxicating presence strengthens the free-wheeling plot structure. 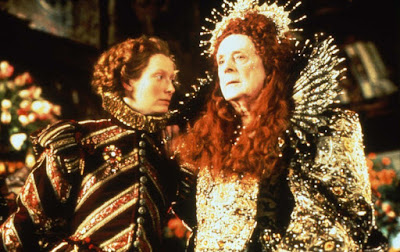 Tilda Swinton and Sally Potter have started collaborating on this project five years before it went to production. It’s pretty evident how their long involvement have impeccably nurtured the ideas to come up with best possible devices. Virginia Woolf published the novella in 1928 and is alleged to have used Orlando merely as a conduit to playfully address her bewilderment over gender perceptions and restrictions over different eras and centuries. To align with Woolf’s idea, the script takes a slightly detached perspective, moving between one vignette to another (each situation’s theme is explicitly addressed in inter-titles: eg, death, love, sex, etc), and using it as a canvas for its thematic inquiries.

The rascally central conceit of Orlando may lack the strong emotional resonance of other felicitated self-discovery journeys, although it makes up for this through the remarkably rich and memorable camerawork. Potter’s elegant camera movement and Swinton’s serenely composed bemusement carries the feeling of whimsy and dry humor oft found in Woolf’s works. 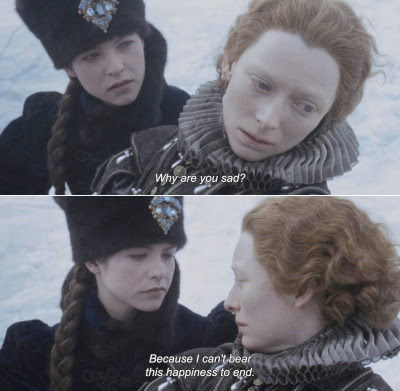 Tilda Swinton’s titular Orlando is a dashing nobleman, born into wealth and privilege. In 1600, the young man has a fateful meeting with elderly Queen Elizabeth (Quentin Crisp). The Queen promises him great deal of wealth and land, provided if he doesn’t ‘grow old and wither’. Orlando decides to do just that: to progress through centuries without ageing. In 1610, Orlando lives in a huge estate and captivated by the arrival of an enchanting Muscovite Princess named Sasha (Charlotte Valandrey). The arrival of Russian diplomats is set in the marvelous background of frozen Thames (with waiters delivering drinks by skating on ice). In the pursuit of love, he lets down his betrothed fiancee, and later Orlando himself is rebuffed by Sasha. Arriving at a conclusion that women are beyond trust and comprehension, Orlando tries to be a poet and fails.

In the late 17th century, he is appointed as an Ambassador for Middle-East country and eventually fumbles in the diplomatic test. Soon Orlando transforms into a woman. Gazing upon his now transformed female body, he says with a note of amazement, “Same person. No difference at all…. Just a different sex”. Orland’s spiritual calmness persists as she lives in the puritanical British society where intellectuals spout ridiculous claims on the nature of ‘fairer sex’. Orlando’s properties are threatened since as a woman she has no rights to inherit property. However, she rediscovers love and sex through an American drifter Shelmerdine (Billy Zane). The film ends in the timeline, well past the novella’s period. Orlando is seen cruising on a motorbike with her little daughter in 1990s Britain, excited by the new-age freedom and the ever-changing gender precepts.

Sally Potter’s script does find it difficult to maintain cohesiveness with the breakaway narrative. The laborious task of moving through time and space is not as easy in terms of visuals as compared to richly adorned prose. But as I mentioned earlier, Potter’s aesthetic maneuvers finely conveys Woolf’s treatise on shifting gender roles. The scene between Shelmerdine and Orlando, where the lovers discuss about their desires which stands against social expectations of gendered beings, is brilliantly shot savoring the dry wit and richness in the conversation. The occasional fourth-wall breaking moments may seem silly, but it arrays rightly with acutely self-conscious nature of Virginia Woolf and her central characters. Moreover, the devilish close-up shots of Tilda Swinton’s face as she faces the camera (or us) keep alive the feelings of gaiety in the narrative. 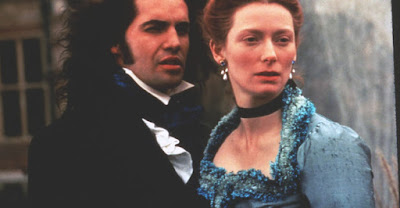 It’s simply unimaginable how Orlando’s solitary stretch and existentialist muses would have played out on-screen without Tilda Swinton donning the role. It’s debatable whether Swinton was very convincing as a male, but there’s an equanimity and soulfulness in her composure that can’t be as fully realized by another actor. Despite the narrative framework maintaining a distance from its characters, Swinton brings up emotional transparency with greatest skill (her sad posture when she answers the question, ‘Why are you so sad?’ balancingly conveys inherent joy of newfound passion and the lament for its inevitable loss). Considering the narrative’s offbeat flourishes, the performances could have easily turned into caricatured portrayal rather than providing some emotional anchor. Both the excellent supporting cast and Swinton doesn’t do that mistake. The production and costume design immediately conjures the word ‘sumptuous’ from our mind (the film received two well-deserved Oscar nominations in these categories).

Orlando (93 minutes) is an unconventional century-spanning drama that must be watched for clear-eyed directorial gaze and Tilda Swinton’s distinctive screen presence. Despite few clumsy or disjointed narrative missteps, this is an audacious adaptation of Virginia Woolf’s text on preconceived gender expectations.

at November 13, 2019
Email ThisBlogThis!Share to TwitterShare to FacebookShare to Pinterest
Labels: British Cinema