In many ways The Story of Qiu Ju (‘Qiu Ju da guan si’, 1992), the fourth directorial venture of Zhang Yimou, who is the most renowned among the ‘fifth generation’ of Chinese film-makers, marks a departure for its film-maker. Zhang’s first three period dramas – Red Sorghum (1988), Ju Dou (1990), and Raise the Red Lantern (1991) – possessed a sort of filmic beauty, an almost fairy-tale quality. Raise the Red Lantern, specifically, bowled us over with its sumptuous use of colors and elaborate sets. But ‘The Story of Qiu Ju’ is set in present-day rural China and Zhang replaces his rich formalism with coarse, grainy aesthetics of Italian neo-realism (using concealed cameras to shoot on streets and hiring non-professional actors, etc). The artist’s muse -- the extremely beautiful Gong Li -- also plays an unglamorous woman, cloaked in drab attire and walks around slowly due to her character’s well-developed pregnancy. In fact, Zhang wholly resists from directing his camera at Gong Li’s pretty face (apart from the final shot). 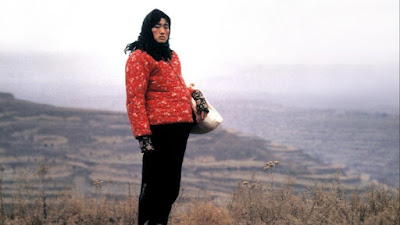 The Story of Qiu Ju was approved by the state censors, a fortune denied for Ju Dou & Raise the Red Lantern, whose final version was banned in China for a period. Perhaps the censors found Zhang’s mild, veiled criticism acceptable compared to his previous ventures (Zhang Yimou followed up ‘Qiu Ju’ with ‘To Live’ which was denied a theatrical release in mainland China). Based on Yuan Bin Chen’s novella ‘The Wan Family’s Lawsuit’, The Story of Qiu Ju was adapted to screen by Heng Liu (who collaborated with Zhang in ‘Ju Dou’ and ‘The Flowers of War’). The role the star-actress Gong Li played in this film and To Live (1994) were the most sympathetic and resilient figures she has donned among her eight movie collaborations with director Zhang Yimou (she was the lead actor in the film-maker’s first six works).

Gong Li’s titular character was first seen walking uncomfortably in a street that’s buzzing with people. She walks alongside another young woman who is pushing a cart within which a man lays down. The story is set in the remote north-west province of Shaanxi and it is winter. The trio reaches a doctor’s office and the doctor, chopping firewood to endure the punishing cold, looks as world-weary as the three. Qiu Ju says her husband Wan Qinglai (Peiqi Liu) was kicked in the groin by their village chief Wang (Kesheng Lei) over a petty argument. The doctor suggests rest for few days. Believing in traditional Chinese notions, Wan accepts his fate and waits for the pain to subside. But Qiu Ju wants an apology from the chief. The pregnant Qiu Ju laments, “If we can't fix your plumbing, we're stuck with the single-child policy for good.” In fact, the country’s child policy is indirectly the reason behind the tension between the two men. Wan has approached the chief, seeking approval to build a shed on their farm to store chili peppers. When the chief rejects this request, Wan is alleged to have made a subtle insult on chief’s lack of male children (he has four little daughters). Hence Wang got the kick in the place ‘where it counts’. 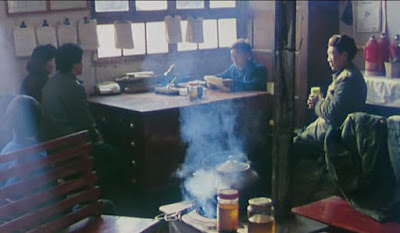 Qiu considers that the chief went too far by kicking her husband in the testicles. She first files a complaint with the local official Li (Zhijun Ge). The official proposes a compromise, modestly fining chief Wang. However, Qiu Ju doesn’t want financial compromise but only a simple apology. The chief’s pride won’t allow him to succumb before a woman. He insults her and it only fuels Qiu Ju’s resolve to take her case to the higher authorities. Each of these journeys is episodic, sometimes abruptly cutting from village to town or city and vice-versa. Qiu Ju is accompanied by her naïve sister-in-law Meizi (Liuchun Yang), both sort of lose themselves watching the hustle and bustle of city life for the first time. Qiu Ju does her best to navigate through modern China without getting ripped off (the country wardrobe although marks her as an easy target). Nevertheless, the bureaucracy keeps on suggesting the same solution.  And by the time the wheels of justice are set in motion, Qiu Ju doesn’t feel the same about her doggedness to reap justice.
Zhang Yimou shows tremendous restraint in setting up this simple conflict, never over-dramatizing the plight and emotions of the ordinary people. The authenticity and realism Zhang brings to the proceedings turns the film into a pleasing visual document of the Chinese way of life. The film-maker interleaves the narrative with small, unfeigned moments: the doctor chopping firewood; Qiu Ju and Meizi hauling chili peppers to a street market; the couples applying for marriage being jovially interviewed in the local government office; Qiu Ju’s hunt for the cheapest place to stay; the Public Security Bureau’s President treating the ‘country bumpkins’ to lunch; Meizi having her first American soda; Qiu Ju returning from the city with presents for her family. Such charming, understated notes that visualize the rhythm of village life keep us wholly engrossed despite the cyclical, repetitive nature of the narrative. 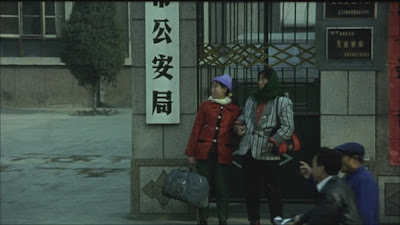 Zhang doesn’t make anyone out to be the bad apple. The chief finds himself in a strong position within the village and the legal hierarchy. His family set-up is interesting: an elderly woman, the chief’s wife and his four daughters (the family always welcomes Qiu Ju and her husband Wan with an innocent smile in spite of the conflict). He demonstrates his masculinity by the control he exerts over them. We may never perceive the chief’s defiance in the same note as Qiu Ju’s, mainly because the pregnant woman’s pursuit is mixed with purity and naivety, whereas the chief just wants to perpetuate the little power he possesses. But his haughtiness on being the village patriarch doesn’t stop him from displaying humane gestures. Zhang equates the chief’s humanist action during a dire situation with the traditional Confucian-based values of mutual obligations. The restrained old-school method of handling disputes in village life is preferred over the deeply ingrained indifference of the bureaucratic procedures (Of course, the traditional Chinese methods may contain problems in addressing more complex issues). Zhang’s intention isn’t to severely indict the rule of law (may be because of his then recent confrontations with the state censors), but to gently present the irony in state’s slow and very impersonal delivery of ‘justice’.

The Story of Qiu Ju might take its simple central conflict to absurd heights. We may wonder at the fastest response rate of bureaucracy, doubt Qiu Ju’s strength (owing to her mature stage of pregnancy), and financial position while she frequently makes these exhausting, costly trips to the city. Suspension of disbelief is necessary to take these narrative notes and Gong Li’s subdued acting style proves to be worthy distraction from such queries (What I particularly liked about the actress’ performance is the way she allows Qiu Ju’s anger to surface through her tenacious actions rather than dramatized emotions). Equally baffling was the greatly accommodating and kind nature of almost all the bureaucrats in the movie (that might be Zhang making sure the film gets past the censors). But still as a socio-cultural piece, The Story of QiuJu immensely engages us. Before Zhang Yimou went to make high-budget martial-arts epics, he informed movie-goers about the life of ordinary Chinese. And Qiu Ju was perhaps the most appealing and sympathetic of his ‘ordinary’ Chinese subjects.