Jar City [2006] – A Restless Land Blighted by Haunted Past


Icelandic author Arnaldur Indridason’s crime fiction provides rich insight into the small island nation’s culture and the conflicts plaguing them – from racism, immigration to stark isolation & corporate malfeasance -- in their march towards modernity. Mr. Indridason’s Erlendur detective series have captivated readers all around the world. 9 out of his 11 novels were translated into English (I have read five so far). Detective Erlendur, like other Nordic detective protagonists, is an enigmatic personality with a bruised past and constantly engaged in a battle to conquer his inner demons. He is a solitary, straight-faced, and well-determined individual who pretty much seems to be the embodiment of Iceland itself.

Arnaldur Indridason’s novels always exhibit a lament for the loss of heritage and frets over inhumane, indifferent economic progress. Yet, the crime fictions don’t try to mythologize the past. In fact, the novelist’s tales emphasize that there’s much more to their country than its idyllic or beatific looks the tourist department advertises. In 2006, Arnaldur Indridason’s best-seller Jar City (aka Myrin) was adapted into feature-film by Iceland’s prolific and prominent film-maker Baltasar Kormakur (101 Reykjavik, Everest). 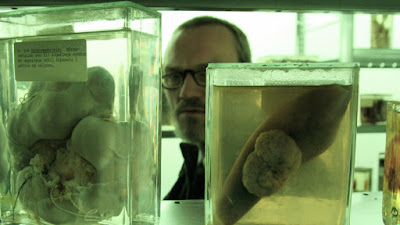 Written in 2000, and translated to English in 2004, the novel Jar City won Glass Key Award for Scandinavian Crime Fiction. Indridason later won Gold Dagger, Britain’s top crime fiction award, for Silence of the Grave. Director Kormakur’s irredeemably stark visual style is often compared with Norwegian film-maker Erik Skjoldbjaerg’s top-class procedural Insomnia (1997). He was internationally renowned for the Icelandic slacker film 101 Reykjavik (his directorial debut). After the wonderful dramedy The Sea (2002), he went on to direct strictly mediocre American thriller A Little Trip to Heaven. His directorial sensibilities strengthened once again in Jar City which had a great mood and perfect style to enrich the distressing substance.

The film opens in the dark office of a hospital’s genetic research wing as a fatigued man named Orn (Atli Rafn Sigurdsson) is looking over some papers. Orn’s six year old daughter is dying of incurable genetic disorder disease. Orn has dedicated his life to track down the origin of rare diseases within his country and now he is left with no option to treat the disorder. He sings a lullaby to his little daughter and it is cut to the shots of funeral procession. In the other corner of the city, an elderly man named Holberg is found murdered, his head split by ashtray. ‘It’s typical Icelandic murder: messy and pointless’ says detective Sigurdur Oli (Bjorn Hlynur Haraldsson) to chief detecive Erlendur (Ingvar E Sigurdsson). Erlendur is not a man of style. He just wears a heavy cardigan and sports a dogged look, dutifully following the crumbs of evidence to get at the truth.

As Erlendur and his detective team piece together Holberg’s past to understand the motive behind the murder, Erlendur’s wayward, drug-addicted daughter Eva (Agusta Eva Erlendsdottir) crosses the path. She desperately asks the father for some money. Later, when Erlendur invesigates Holberg’s old friend Ellidi (Theodor Juliusson) – Iceland’s notorious maniac – in prison, the man pierces Erlendur’s steely resolve by saying nasty things about Eva (some of which he knows to be true). A corrupt policeman, a incident of little girl who died too young, an alleged case of rape, and the missing case of Holberg’s yet another notorious friend Gretar gets mixed up in the murder investigation. Gradually, Erlendur learns how the indelible past has left its traces on the present, choking the life out of peaceful individuals. The mystery here is so thin and easily predictable, but what’s more intriguing is the thematic exploration of loneliness and loss which is sufficiently idiosyncratic to the particular community. 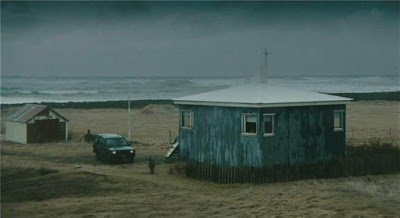 The chief flaw of Kormakur’s adaptation is its minimized focus on the hazardous aspects of genetic research and the turmoil over limited gene pools. Director Kormakur rushes past in the later half without profoundly exploring these vital thematic issues. While the plot-driven approach towards the end brings it a few notches down from being great crime feature, Kormakur’s breath-taking visuals keeps us intrigued throughout. In the opening sequence, there’s an elegiac shot of a dying girl bathed in blue light and then later we see shot of the child’s body on cold slab, cut to overhead shot of the same girl dressed in angelic white dress and laid inside a coffin. The harsh and unforgiving nature of the landscape is brilliantly established in the prologue. It’s the tale where only the strongest survive and the meek indviduals and children who are buried underneath haunt the strongest. And, the tale’s strongest character have lost their children (Erlendur’s loss of his child is slightly different to that of Orn’s loss). This irreparable loss serves as central force that drives the actions of protagonists and antagonists.

Director Kormakur makes perfect use of Iceland’s damned, intimidating landscapes which reflects the inner lives of the characters. Ellidi defiles like the punishing weather, Orn mourns the loss similar to the isolated population, and Erlendur stands tall, succumbing to his daughter’s love as well as denying to be browbeaten by the other bullying factors. The moral implications of the crime are more complex than the procedure to find the perpetrator. It’s understandable especially after considering the fact that this is a small country where everyone is connected to another, in more than one ways, and a place where murder is rare. The motives behind such crimes won’t be definitely as twisted as in the large-scale man-hunts in American procedurals.

Also Read:  25 Essential Iceland Movies That Are Worth Your Time

Thankfully the best parts of Jar City are not the moments leading to unveiling of central mystery. The juicy part lies in studying the contrasts of the place and in scrutinizing little gestures to vividly draw the character’s inner lives. For example, Erlendur’s brief longing to look at the girl serving at drive-in counter tells us something about his emotional pains. Moreover, the film shines in the moments depicting deadpan humor. In one scene, detectives Sigurdur and Elinborg to further the investigation are compelled to go door-to-door asking old women if they had been raped thirty years ago (‘No thank you’ says a old woman when Sigurdur asks ‘Have you been raped?’). Ingvar Sigurdsson leads the brilliant cast, flawlessly playing the disheleved detective who showcases fondness for his daughter and boiled sheep’s head.