Hollywood’s penchant for staging wide-scale disaster or apocalypse is well known. While the contemporary state-of-the art technologies that showcase annihilation promise pop-corn entertainment, the film-makers forget to add the vital ingredient of disaster cinema: emotional connection. The flattened, stereotypical portrayal of characters are so bad that we begin to pray violent on-screen death for them (and of course all these movies have annoyingly stupid happy ending). But disaster or apocalyptic cult films haven’t always been this worse. American cinema’s fear for The Bomb (at the height of cold war) has provided some of the best apocalyptic standoffs. Films like On the Beach (1959) [despite being an underwhelming novel adaptation], Fail-Safe (1964), Testament (1983) created a subdivision of disaster cinema, projecting Cold War tension and fear of preemptive strike.

In the same era, Kubrick’s timeless comedy Dr. Strangelove (1964) exposed the fallacies and absurdities of nuclear war. By the early or mid 1980s the Cold War cooled off and nuclear apocalypse threat turned to an archaic subject (Cameron’s Terminator – 1984 – took the theme in different directions replacing urgency and bleak nature of the narrative with fun entertainment). So when Steve De Jarnett’s off-the-wall disaster thriller Miracle Mile released in 1988, it had a very brief theatrical run. Although Mr. Jarnett wrote the script for the film ten years before, it had taken him that much time to stop the studios from stamping on his vision (in 1983 Miracle Mile was in the first position of ‘10 Best Unproduced Scripts in Hollywood’ list). 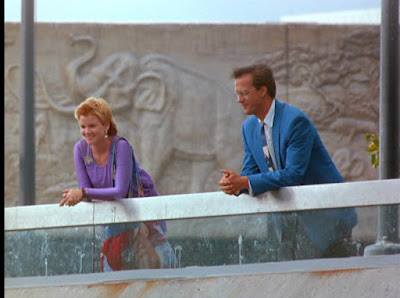 Steve De Jarnett who had made two films before Miracle Mile didn’t make another feature film. He directed television episodes in the 1990s, wrote an award-winning fiction and is a visiting professor of Film. The script for Miracle Mile should be studied by aspiring screenwriters who can learn how to maintain an underlying sense of coherence despite diffusing erratic narrative turns and dream logic. Even in 1988, the narrative’s urgency was seen as memory of bygone era. Now the protagonist’s tension looks far-removed and slightly goofy yet the ambiguity and mash-up of genre provides great meaningful entertainment. If you are curious about Miracle Mile after reading its plot in IMDb or Google, it’s better to dive into it before reading detailed reviews (including this one). The fascination in watching this film lies in witnessing how the bizarre scenario unfolds as it gradually descends into a full-scale chaos.

Opening with Tangerine Dream’s ethereal soundtrack, the narrative’s ominous mood is slowly built from the start. The film’s heart is the love story between Harry Washello (Anthony Edwards), a struggling trombonist and Julie (Mare Winnigham), a waitress. The city of Los Angeles itself plays the other important character. Touring Los Angeles’ Natural History Musuem (La Brea Tar Pits), on one boring day Harry meets and captures Julie’s attention by his goofy antics. Fate brings them both to spend the afternoon in the museum. Thirty-year old Harry immediately feels she is the girl of his dreams. 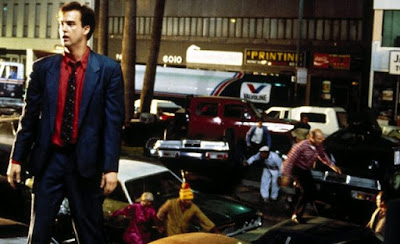 Later, Julie brings her grandfather Ivan (John Agar) to see Harry play trombone in the jazz band. Harry meets Julie’s grandfather and accidentally meets her grandmother Lucy (Lou Hancock), who hasn’t spoken with her husband for years. Julie agrees to meet Harry later that night at Johnie's Coffee Shop in the Miracle Mile district after she finishes her shift. But fate once again intervenes and this time by stopping Harry from meeting his lover at midnight. When Harry finally wakes up it’s close to 4 a.m. He arrives at Johnnie’s asking Julie’s co-worker for the phone number to apologize. After the unsuccessful phone call, Harry hears the phone ringing in the booth.

He picks it up and a frantic voice at the other end, who thinks he has called his dad, tells Harry that Los Angeles will be Ground Zero in an hour. The frantic voice belongs to a young guy who says he works in a missile silo and conveys certain significant codes. The guy never gets a chance to dial his dad as Harry hears him getting shot by the superiors. Then a burly voice picks up the phone and says, “forget everything you’ve heard and go back to sleep”. Harry is shocked since it seems too real to be a prank. Anyway, he feels the need to alert Julie. And to do that he has to get her address from the waitress inside. On this process, he tells what he just heard to the small crowd inside the shop. Some are panicked and some laugh it out. But the curious gaze of one woman named Landa (Denise Crosby), cloaked in formal business attire and carrying the brick-sized 1980s mobile phone, seems to confirm Harry’s fear. She immediately calls up some government sources and cooks up a air-borne evacuation plan. And, Harry races up through the limited time period to save Julie. But fate and chaos impedes his path.

Jarnett’s frenzied race against time shares some tonal similarities with Martin Scorsese’s After Hours (1985). The dreamy, unforeseen textures in the work bring to mind the efficient Joe Dante movies. But Miracle Mile is one of the very few American movies to approach impending disaster on such an intimate level. On the surface, the script has enough theatricality to make up a typical Hollywood film. Nevertheless, despite the unbelievable coincidences and turns of fate, the film works mainly due to its firm emotional core. Moreover, Jarnett never shies away from diving into the unsettling chaotic nature of the scenario. 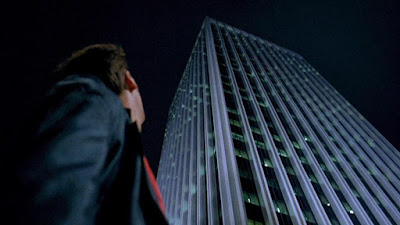 The slow-burning energy in the first thirty minutes or so was engaging, but it pretty much stays in the Hollywood territory. The shift happens with the terror-tinged gas station sequence. Up until the point, it looks like a harmless entertainment where the narrative ends with the lovers locking their lips in a peaceful habitat. Alas, the violence at the ‘gas station’ scene changes the equation to sends us on an unanticipated nightmarish path. The performances in key scenes aren’t up to the mark although Jarnett’s visual sucker punches makes up for those flaws.

Mr. Jarnett could have tightened up the script especially towards the end. Yet Miracle Mile would have been only a laughably silly movie if Jarnett didn’t take up the directorial duties. The tonally erratic and weird script would have been definitely chopped up by another director (Jarnett perfectly turns the script’s playfulness into the visuals) . As I mentioned earlier, there’s coherence in terms of emotions felt which instilled within me a sort of readiness to take in the bumpy narrative turns. The full-fledged unrest in the LA streets during early hours of sunrise was the film’s most astoundingly staged sequence.

The hazy red-tinged color palette sets up the mood for upcoming catastrophe. Furthermore, in one moment at this final stretch, Jarnett showcases the chaos at different plane of actions – from top of the cars, street level and ground or sewer level – to impeccably spread the discomfort (the scene is done on a very limited budget but more effective than many modern CGI works). The resolution to Harry and Julie’s romantic getaway is something one wouldn’t expect from a Hollywood product. The unique and chilling final shot will definitely stay with us for some time.