Mexican film-maker Francisco Vargas’ directorial debut El Violin (2005) opens with a disturbingly sad and timeless scenario: villagers, probably on the side of guerrilla forces, are brutally interrogated by military personnel; the opulent black-and-white cinematography plus the distanced, static shot that deliberately obscures the faces of the torturers and the tortured further boosts the tone of timelessness. This prologue ends with a perturbing image of a soldier raping a peasant woman, while in the background naked woman lay on one side and loathsome soldiers consumed by lust stand on the other side.

It took nearly six years for Vargas to raise the resources necessary for making El Violin (script developed from an earlier short film he made) which although reaped international awards (including ‘Best Actor Award’ at Cannes Festival) had a tough time to find Mexican distributor. Director Guillermo del Toro championed the film and gradually through positive word of mouth El Violin was seen by considerable number of audiences within his native country. 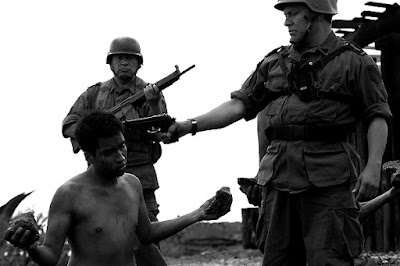 El Violin is set in a nondescript Latin American country (though those who know history can find references to indigenous Mexican peasant revolts in the 1990s), where our octogenarian, one-handed protagonist Don Plutarcho Hidalgo (Angel Tavira) lives peacefully in a mountainous village with his son Genaro (Gerardo Taracena) and grandson Lucio (Mario Garibaldi). Apart from farming duties, Hidalgo and his family earns money as traveling musicians.

The trio travel to nearby town and while the old man and his son produce beautiful music (Plutarco ties the violin’s bow to his stump), the grandson begs for coins. We could also easily guess the trip serve another purpose for the trio, at least for Plutarco’s son who uses the trips as a cover to extend his rebel activities: smuggling guns and messages to the guerrillas. When the trio is on the way to their village they hear distressing news of military raid.

Genaro gets anxious because his wife and little daughter are still in the village. Furthermore, he is robbed off the chance to smuggle out the ammunition necessary for the guerrillas to make their stand against the soldiers. The irreparable loss pushes the little grandson into melancholia, but Plutarco accompanied by a stolid expression tries his best to allay the boy’s fear and grief. The next day Plutarco buys a mule from a seedy landowner and returns to his village. He says to the troops that he wants to tend to his corn crop. Over the next few days, Plutarco befriends the Captain (Dagoberto Gama) who appreciates the one-handed violinist’s soothing tunes. The Captain even allows Plutarco to inspect his crops, which provides the violinist to smuggle few ammo in the violin case to his son (the ammo are safely buried in the fields). Of course, as one can reckon nothing good can come from such a tricky premise. 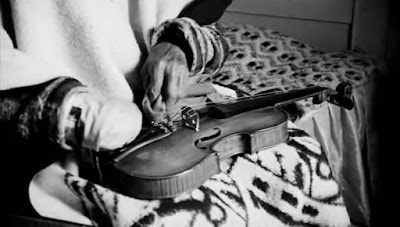 El Violin could be criticized for its all-too-neat (noble guerrillas vs savage soldiers) setting, slightly stereotypical depiction, and bit of uneven pacing in the first-half. But the central characters are beautifully written without a single note of falsity. The interplay between the elderly violinist and the music-loving yet sadistic Captain forms the crux of the narrative. Particularly interesting as well as memorable was the violinist’s resolute, dignified last stand against the virulent forces brutally uprooting their lives.

Writer/director Vargas could have finished his film with a cathartic image of slain soldiers, but Plutarco’s simple declaration that “the music is over” makes a powerful statement on the inhumanity and injustice that’s about to follow. Vargas smartly stays away from rhetoric and lets the piercing gaze of his elderly hero to speak of the human values, shockingly absent in the film's reality.

El Violin is neither a thriller nor a profound character study. It’s a stunning atmospheric tale that understandably overwhelms us with eye-catching black-and-white images, conjured by cinematographers Martin Boege & Oscar Hijuelos. For a work of debut film-maker, the film contains quite a few virtuoso visual moments, including the long tracking shot when Plutarco tells his grandson the story of gods and humans. 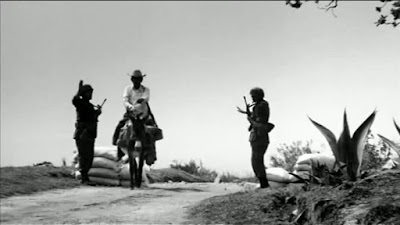 And it is to Vargas credit that the symbolic representation of the musical instrument and music – its recuperative power – never comes off as heavy-handed. Eventually the narrative’s high-point is Angel Tavira’s unforgettable screen presence as the grizzled Don Plutarco. Born in Guerrero, Mexico, to a family of musicians, Mr. Angel has played music throughout his life despite losing a hand in an accident at the age of 13. He passed away on June 2008, and Don Plutarco was his first and last movie role.