A lonely and isolated individual could come across a loving personality who’s on the same page with him/her, and from whom a blissful bond is developed. But what if this lonely person meets an unhinged personality, who passes off nothing but a severe dose of paranoia? This happens to be the basic set-up for William Friedkin’s unnerving chamber piece Bug (2006), an adaptation of Tracy Letts’ Broadway play. Of course, the idea that hazardous delusion or extreme mental illness is contagious, isn't instantly convincing. Yet Mr. Friedkin brings up brilliant feverish intensity and verisimilitude to the proceedings so as to cloak it’s otherwise obvious weaknesses.

Friedkin’s methodical peeling of the layers beneath the simple story turns the horror element predominately metaphoric: as a bizarre contemplation on PTSD or a reflection of our personal and collective insecurities, boosted by government’s corruptible and unfathomable actions. From The Exorcist (1973), Sorcerer (1977) to Killer Joe (2011), William Friedkin has shown willingness to deeply descent into madness and destruction; Bug is a vital addition to that uncompromising vision. 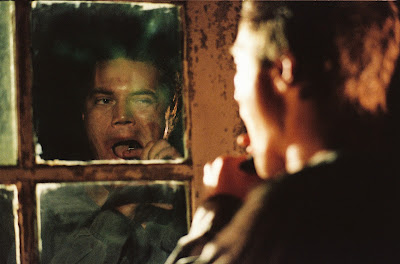 Bug is entirely set in a dingy, low-rent motel room in the middle-of-nowhere. The film opens with a series of helicopter shots to emphasize on the remoteness of the place. These shots are cut to shots of old ringing telephone, the piercing sound infesting the surroundings with high-wire tension. Middle-aged Agnes White (Ashley Judd) occupies a squalid room in the motel. She keeps on receiving the strange phone calls, but when picked up she hears nothing on the other side. The calls might be from her recently paroled and abusive ex-husband (Harry Connick, Jr.). Agnes dreadfully waits for his arrival and only finds solace in chatting with her lesbian friend R.C. (Lynn Collins), both of them working as waitress at local bar. R.C. introduces Agnes to the mysterious, reticent guy Peter Evans (Michael Shannon).

Agnes merely exists in the daze of booze and drugs. Her emotional bruises are so deep to be immediately solved by newfound love. However, she is empathetic towards the fellow loner, Peter. He seems sensitive compared to her violent husband. But there’s also a feeling that Peter is hiding something or there’s something not quite right with him. Irrespective of his slightly balmy nature, Agnes falls for him and gradually gets drawn into his sickeningly scary delusional world-view. What follows is a delirious examination of the demented psyche. 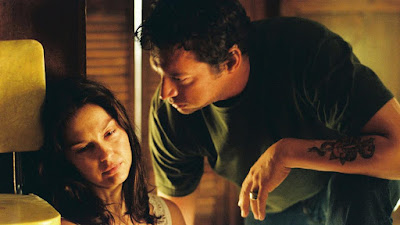 Bug certainly boasts Friedkin’s weirdest and disturbing visuals. He fascinatingly plays up the character’s inner state through seemingly random elements, like an empty shopping cart or bag of onions, whose depth of meaning is revealed later. Although set mostly inside a single room, Friedkin’s impressive craft fittingly employs sound, light, and color to hint at the character’s dimensions. He subjugates the typical theatrical feeling by building the character with economic yet precise visual details. The narrative mostly evokes subjective viewpoint (for eg, the ominous buzz of smoke alarm or sound of helicopter blades).

While the director allows us to understand & immerse ourselves in the duo’s isolation and sadness, he keeps us at distance when displaying their deranged conviction. The most interesting interlude of Friedkin’s direction is the montage sequence of sexual intimacy between Agnes and Peter. The camera repeatedly lingers over their bodies, and more than suggesting passion, it stages the intercourse as a form of hazardous infestation. From then on, the visuals get increasingly wacky and further enlivened by torrential performances (the ‘teeth-pulling’ scene is a testament to Friedkin’s visceral power). 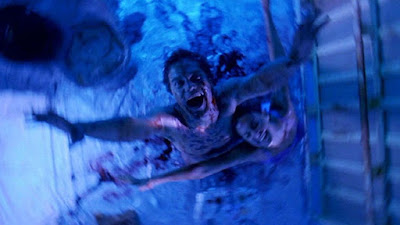 Ashley Judd delivers her best and most complex performance in the role of Agnes. She effortlessly brings out the character’s vulnerability and warmth. That crazy monologue towards the end, delivered in the form of a wail, got to be one of the unforgettable rants in cinema. Michael Shannon astoundingly reprises the role he played on the stage. By the time he played Peter Evans, Shannon was in cinema for more than a decade. His towering performance in Bug served as prelude to his biggest breakthrough roles in Jeff Nicols’ movies (Shotgun Stories & Take Shelter). Shannon’s portrayal of madness avoids hamminess. He makes Peter dangerously odd and at the same time, an endearing figure.

Not everything in Bug is perfectly convincing. Agnes’ sudden transition or downward spiral (irrespective of her depressed nature) feels a bit rushed-out. Friedkin takes good time to set up her character, only to make us witness her rapid disintegration in Peter’s acidic delusions. But essentially, the movie stays raw and disconcerting till the end; its preposterous elements are somewhat acceptable. There’s poignance in Agnes and Peter’s utmost degradation, since it is rooted in their loneliness. And, the true horror in Bug doesn’t just lie in physical self-mutilation or pyrotechnics, but in depicting how two lost souls could find true love and yet descend into the chasms of hell.