Apart from being a master storyteller, Martin Scorsese was well-known for his encyclopedic knowledge about cinema and for his commitment to preserve or restore the lost and forgotten cinematic gems of 20th century. In 1990, the American film-maker founded non-profit group Film Foundation which aided in restoring a great number of American, British and West European movies. Later in 2007, Scorsese founded the World Cinema Project (WCP) to revive cinematic wonders from countries that has perpetually missed out on film preservation efforts. The mission of WCP is to focus on distinct cinema that has been wholly left out of Western reading of the film history. The first in the WCP series represented films from Sengegal, Turkey, Morocco, Bangladesh, South Korea, and Mexico.

Directed by Senegalese director Djibril Diop Mambety, the resplendently restored version of Touki Bouki (aka Hyena’s Journey, 1973) is an energetic and overtly symbolic document of a specific time and place rarely witnessed on-screen. Djibril Diop Mambety was 28 years of age when he made Touki Bouki, who didn’t receive any formal training in cinema (he made his first short Contras’ City at the age of 24). Satirical and wildly experimental, Mr. Mambety’s visual imagery makes passing references to Nouvelle Vague, especially the films of Jean-Luc Godard (Breathless, Pierrot Le fou). Mambety intended Touki Bouki to be the first of trilogy of film about the effects of neocolonialism on the African mindset. However, it took the director 19 years to return with his next feature film Hyenas (1992), a corrosive tale of human greed and corruption. Mr. Mabety was later diagnosed with lung cancer and died in 1998 before he could make the third film. 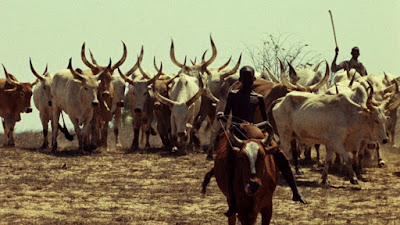 Djibril Diop Mambety has embraced film-making at the time Senegalese and African cinema on the whole was young. Ousmane Sembene, hailed as Father of African Cinema, made his first feature Black Girl in 1966, which was touted as the first film made by a Black African. With French production companies aiding the young African natives, soon several exciting and new film-makers portrayed their unique vision of disintegrated, impoverished yet very lively African society.

Malian film-maker Souleymanne Cisse (The Wind, Yeleen) and Burkina Faso’s Dani Kouyate (Keita: The Heritage of the Girot) were some of the other African film-makers who followed the path of Sembene and Mambety. Vibrant, marvelously colorful, fantastical and angry in tone, Mambety’s formal and thematic approach is entirely at odds with the works of Ousmane Sembene. Few months back, I read in an essay about African cinema (sorry, couldn’t exactly remember where) that equated Sembene’s approach to sublime works of Yasujiro Ozu and Mambety’s to iconoclastic vision of Nagisa Oshima. 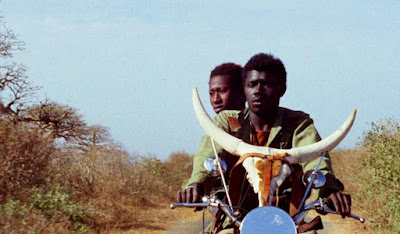 Touki Bouki opens with an explosive and disturbing scene, one that burns into your memory and wakes you up from slumber. A boy leads large horned cows across a dry plain on their way to slaughterhouse, encircled with cacophony of cattle’s screams. The unnamed boy returns back alone and then the narrative cuts to a shot of Mory (Magaye Niang) riding through a shantytown in his motorbike with cow’s horns attached to its front. We see a road sign reading ‘Nice, La Riviera et la Corse’, but it doesn’t indicate the French paradise, but only the shantytown where people dream of escaping from poverty.

Mory and his college-going girlfriend Anta (Mareme Niang) fantasize about moving to Paris (Josephine Baker’s ‘Paris….Paris’ song is heard in the background) and forge a new life, drawing in the anger of their traditionalist family.  Lacking money to make the trip, the duo concocts different schemes to make their dream a reality. From stealing the earnings of a local wrestling match to ripping-off a wealthy friend, Mory and Anta run amok amid the hometown to purchase a ticket on a ocean liner traveling to Paris. These adventures alternately exudes starkly realistic and a carnivalesque or surrealistic tone.

With Touki Bouki, director Mambety exchanges linear narrative structure for poetic evocations and symbolic values. Perhaps, the director while sharply employing the visual flourishes of French New Wave sees the characters and their immediate surroundings from a very symbolic perspective that there’s not a strong emotional investment. Mory and Anta rather than being fully-realized characters looks like well-adorned conduits expressing the desperation and rebellious mindset of post-colonial African youth. However, Mr. Mabety’s explosive visual tendencies and fiery approach to the themes pushes us to somehow overlook the sparse emotional investment. 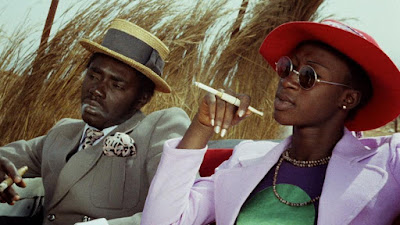 The ‘Godardian’ contemplation of the African youth’s false or broken dreams acutely addresses the cultural and moral conflicts between new African society and apparitions of European colonialism. The brilliance of Touki Bouki lies in the way Mambety darts between provocative, tempestuous mood and sad, yearning mood. There’s a brilliant scene where the couple lay naked in smooth, elevated rock, looking over the glistening ocean and desiring for the total freedom. In one comic interlude, Mory nakedly parades aboard a stolen car that cuts to dreamy shot of people welcoming their new political leader. All the disparately toned sequences emphasize how the ‘better life’ that’s comprehended in terms of material wealth doesn’t bestow any greater freedom, but rather makes post-colonial nations to only embrace servitude.