Glory [2016] – A Universal and Timeless Tale of Bureaucratic Nightmare

East European cinema possesses the knack for offering subtle and powerful tales about people getting thrown under the wheels of apathetic bureaucracy system. Their film-makers (especially the auteurs of the Romanian New Wave) simultaneously employ rough-hewn naturalism and a methodical narrative with preordained gallows humor and well-engineered symbolism. Bulgarian directing duo – Peter Valchanov and Kristina Grozeva’s – second feature film Glory (Slava, 2016) is one such mordantly funny and deeply heart-wrenching tale of systemic corruption and injustice. 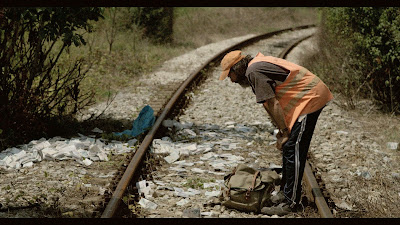 Tons of literature and movies may have persistently warned us on how the modern bureaucratic and economic systems are inhumane to the extent that they privilege the nonhuman traits over the human. But still, when a movie gets the grimy realism right, filled with small details and nuanced observations, as in Glory, it happens to be more than a bland recitation of bureaucracy’s long list of negative atttributes. It provokes us to willingly see things from the vantage point of the besmirched protagonist and furthermore to fully grasp the complexness of political/bureaucratic power.

Kristina Grozeva and Peter Valchanov have shot together several short films, which were screened at different international film festival. Particularly, the duo’s 2012 short Jump was nominated at the European Film Awards. Their first feature film The Lesson (Urok, 2014) was inspired from a newspaper story and made on shoe-string budget without any state funding. The Lesson revolves around a strict school teacher who wants to teach a lesson to the unknown student, stealing money from classmates during the break.

But a large, unforeseen personal debt bestows a hard-to-digest lesson upon the teacher herself. What ensues is a stark examination of the enduring immoralities in the post-communist Bulgaria. Glory follows an entirely different story but deals with similar themes, and also developed from a small news story. In fact, the directing duo have been planning a third film to once again explore the grim lives of working-class people, which is being dubbed as the ‘Newspaper Clippings’ trilogy.

The protagonist of Glory is much-less privileged and more ostracized than the female teacher character in The Lesson. Middle-aged Tzanko Petrov (Stefan Denolyubov) is a railroad linesman. His dishelved looks, stuttering, and hermit-like living draws lot of ridicules in his immediate circle. But Tzanko is content with living in an isolated, dilapidated house with his pet rabbits. Apart from the rabbits, Tzanko feels deep connection with his analog watch (made by Russian company Slava aka Glory), a gift from his deceased father. During working hours, he carries six kilo-heavy wrench to tap and turn the bolts in the railway tracks. He silently passes fellow workers siphoning gas from a railcar. His routine patrol is disrupted when he discovers millions of euros scattered across the tracks. Tzanko honestly reports the money to the authorities, but as they say, ‘no good deed goes unpunished’.

The transport ministry is already facing tons of problems. The minister is accused of financial improprieties by a tenacious investigative reporter. So the minister’s PR hotshot Julia Staykova (Margita Gosheva) sees Tzanko’s honest act a god-given opportunity. To distract people’s attention from the financial scandal, she and her heartless cronies, decide to exploit Tzanko’s noble gesture. The railroad worker takes a day off and arrives in time for a pretentious ceremony, where he would be valorized by the minister himself. Tzanko’s cheap suit and temperament evokes lot of condescending comments from Julia and her cohorts.

Right before the ceremony, Julia removes the man’s own watch in order to receive the new one provided by the minister. Tzanko finds that the new watch is a cheap digital one, which runs slowly. To make things worse, Julia misplaces the guy’s keepsake inherited from his father. Frustrated by the bogus gift and Julia’s hostile reaction, Tzankov’s quest for ‘Glory’ only seems destined to turn more ominous. 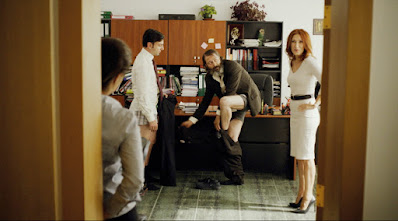 Played by the brilliant Margita Gosheva (protagonist in ‘The Lesson’), Julia Staykova is a much complicated antagonist than what the plot-line may make it sound. In a darkly humorous subplot, we see Julia and her compassionate husband Valeri (Kitodar Todorov) attempting to attain embryonic fertilization. The scenes of Julia undergoing fertilization treatment while being constantly distracted by work-related rapid-fire phone calls, goes for a deliberately symbolic touch. Yet watching Julia in her frenzied, chaotic reality kind of stops her from becoming a cartoonish bad girl. The character is very much grounded in reality, which makes her wilfulness to duplicate and manipulate events more distressful.

Directors Kristina and Peter ably suggest the Tzanko and Julia’s polar opposite nature, by encompassing one in cocoon of silence and natural sounds, while the other is incorporated within noisy, manic atmosphere. The directors metaphorical tools like the wrench, watch, rabbits and the symbolism involved in using a European flag (in the scene Valeri forces Julia to inject herself in the office) may feel pat and transparent. Nevertheless, the methodical precision with which the duo stages these scenes and the superb performances manages to absolutely capture our attention.

In the end, Glory (101 minutes) is an irresistibly powerful commentary on the class inequalities and chaotic bureaucracy.