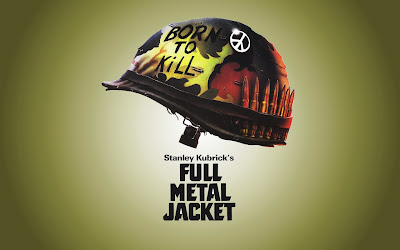 Vietnam war was one of the most insane war in the mankind history. To Portray this horrific tale , you need to equally insane and most brilliant director like 'Stanley Kubrick.' The US Marine Corps are proudly insane.When these forces combine, we have a astonishing, beautiful, electric, and a desperate movie like 'Full Metal Jacket.' It is a master showpiece of the inglorious indignities of war.


In the mesmerizing opening segment of Stanley Kubrick’s film, a tough and abusive drill sergeant (Lee Ermey) is attempting to mold a group of Marine recruits into savage fighting men. His message is simple: thinking is a vice and killing is a virtue. Unlike most of his peers, Private Joker (Matthew Modine) resists the programming. Joker and Pvt. "Gomer Pyle," an overweight klutz, whom Joker must usher through training. Pyle suddenly discovers, with alarming zest, the joys of gunman-ship. "Full metal jacket" -- gun-speak for bullet casings -- is one of the last things he talks about before making his last bloody move.
In the second half of the film, however, Joker is a combat correspondent for Stars and Stripes and is forced into battle where, his values are put to the ultimate test.


Analysis
Although initially received with bewilderment, Full Metal Jacket (1987) now stands among the key works in Stanley Kubrick’s exploration of identity and its problematic nature. The movie is fairly closely adapted from Gustav Hasford’s 1979 novel The Short-Timers. The screenplay by Kubrick, Michael Herr, and Gustav Hasford adds a great quality to it, that conveys the disorder and lunatic violence of this destruction.  Kubrick's soundtrack is characteristically dynamic and explosive. The performances were great from all over. Modine gives out one of the best performances of his career. But R. Lee Ermey astounds in the role of the brutal Drill Sergeant Hartman, how could he not? He was one in real life. Vincent D’Onofrio was also great in a physically and mentally demanding role as the stricken Private Gomer Pyle, who also gained 70 pounds for his role.

The first thing that comes to mind is comparison, since that’s the only way to make sense of why would Kubrick would set up the film in two parts. Anyways, both sections show how the elements of war affect an ordinary person. Due to the brutality of the first part, the second part isn’t as mesmerizing as the first one, but its still captivating. For some of these soldiers this war is a nightmare, and they want to go home, for others, it’s a heaven, and they kill people like crazy. We can clearly see this in the second stage of dehumanization, on how the trained killers react on a real life war environment.

In Kubrick's vision, the schedule of dehumanization of the main character starts, as the complex moral obstacle course has shaped him first into a cautious observer , then an advocate of peace, then a determined protector , and  ultimately a satisfied avenger. He has no more fear because his humanity , despite any misguided efforts to preserve it , has finally escaped. In the flame-ridden city he becomes the newest killing machine to descend deeper into the hell.

It's a war movie yes, but it's not like any other war movie. It doesn't support left or right, it stays in the middle and simply tells it's story. If you watch this movie , you will definitely say, "WAR IS HELL."
Trailer :

Kind of psychopath movie..
Personally i hatred this film :(

man i must watch this...

hey how do you manage to watch so many movies and write about them..

havent watched some of the movies u have reviewed and i think i will give it a shot asap!

hey,liked ur review.I am movie bug myself and haven't yet watched this flick but i m gonna watch it now. My favr8 war movie is SAVING PRIVATE RYAN and letters from Iwo Jima.I ll follow ur blog now.

Watched this movie 5 years back ... Week passed watching this movie ... but still i had the hang-over of WAR in my mind ...