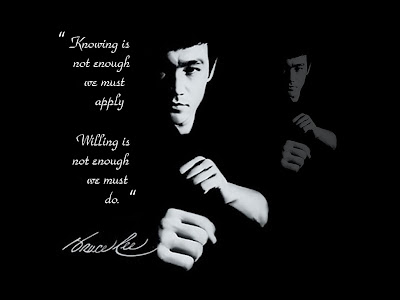 Action is an easy concept to understand, and it holds the attention as long as it's on screen. One doesn't watch a action movie to grasp some deeper meaning ; the motive is enjoyment, not spiritual enlightenment. When this attitude is taken towards the martial arts films, "Hong Kong", as a place and culture became as a style, devoid of  foreignness for the viewers. For people who know and follow this art, it's not just a defensive technique, it's a way of life which makes you a better and strong person. These films are one of the purest genre of action movies. This genre has inspired many boys and girls to take up martial arts as a hobby and making it a global phenomenon.


American Impact
Movies have always been an influence on American culture. Martial arts in particular have has an effect on American culture, which in turn has contributed greatly to how we view martial arts in general. Even the language are different, the ideas behind the films may be a lot more familiar than one might realize. The format relies less on literary devices and more on non-stop action.

The 1960's were the golden era of the Hong Kong studios , but distribution was limited to Asian countries. This all changed when Bruce Lee came onto the screen. He had something that others at the time didn't : a personality and charisma that translated well to the screen. Many of his contemporaries at the time were excellent martial artists, but they did not present a compelling persona outside of their skills. Not only did he present a realistic view of how martial arts are done , but defined a whole genre.


Martial Arts In Japan
Japanese martial arts films are a direct contrast to the Hong Kong style. The Japanese samurai film brings not only sword fighting and action , but "philosophy, and complex states of mind. Because of the many underlying metaphors, such as falling cherry blossoms symbolizing the suddenness of death , may be instantly recognizable to Japanese audience, but are less than obvious to others. Therefore, it may be no surprise that the samurai film is set slightly more to the side in the public eye than the Hong Kong martial arts movies. That is not to say, however, that these films have not made an impact.

When martial arts were introduced to movies, they didn't just make people want to be superhuman and sign-up for classes ; they revolutionized the concept of fighting. For instance, until the 1970's fights were fought with the hands. If one used their feet , then they were considered a crybaby. Now, if one just started swinging they would look clumsy and lacking in skill (not including boxing). The full body is used to fight, and the victor uses theirs more efficiently.

For audiences, violence has always been a part of children film and television programming. Nowadays , with the inclusion of martial arts and a little comedy films such as Kung-Fu Panda , showcase actual fighting to younger viewers. Another example is the movie Karate-Kid. A classic tale of the underdog rising above his enemies.

In today's movies, we see some of our favorite actors being given pre-production training in martial arts and the type of choreography that you would only ever have seen used with someone like Jackie Chan or Jet Li in the past. But movies now rely so much on special effects and very little martial artists. That's what the movies are missing these days. Though there are few hopeful movies like 'Ip Man.'

Mega trendsetters like Matrix series has directly contributed to the entire video game industry, because of martial arts. All of this would not have been possible , if a few people in the begining, had not given the world , a taste of how martial arts can really be. Finally, I'd like to conclude with a quote from Bruce Lee:

Enjoyed this post, but had a couple of thoughts.

Children's films have not always included violence. And the debate is open as to whether including violence, even comic violence, is a good idea for children or not.

I thought a mention of Chuck Norris, Van Damme and Steven Segal was in order for this article, if not Mithun Chakravorty and Danny Denzongpa.

As a lover of Martial arts film from the first one which I saw "enter the dragon", I just do not get bored watching their routine.Good over evil, weak taking on the strong and powerful are some of the things which these movies inspire. As a Tamilian I want to tell you that jacke chan has acted in one of the tamil movies as an extra as also in one Dharmendra Hindi film( I donot remeber the names)

i love watching martial arts when Jackie Chan is acting !

Good points. Bruce changed everything way beyond movies, martial arts, nutrition, etc. He is a Minor Prophet. he changed how we think

The twenty-first century kung fu movie fans more aware and in recognition of the best films of their ancestors were ever. There are three main reasons for this.....