Trust - Hazards of The Internet Age 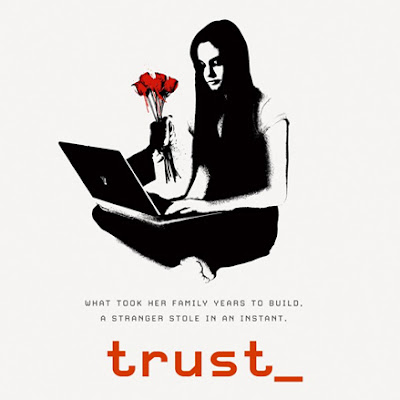 For most of us, the biggest threat the internet poses is that it's as easy to click on wrong information as it is the right stuff. But for innocent adolescents and teens trying to discover who they are, a chat room is like a best friend. Some of those poses as much of a risk as walking alone through an alley at night.
This film 'Trust' talks about the inevitability of not being able to protect your loved ones. The agony that parents go through when they have failed in keeping their children safe and protected. It is a very good movie that few will see, because it deals with a subject that makes people squirm. What's more, this subject is dealt in a effective way, which will depress , disturb, and haunt the viewer for days. Yet for those , who can take this as a relevant message for today's society, Trust is a special movie experience.

Plot
Annie (Liana Liberato) is a typical 14-year old sub-urban girl in Chicago. Reading her instant-message conversations on-screen, the viewer is clued in to a secret life that her parents (Clive Owen and Catherine Keener) barely suspect—an ongoing, increasingly intimate correspondence with a boy in California. Annie thinks she has struck up an Internet friendship with a boy her own age. They chat around the clock, and the boy reveals that, in fact, he is 20. Later, "Charlie" confesses to being 25. Then he announces that he is coming to Chicago, and when she goes to meet him at the mall, she finds a 40-year-old man with a sickening smile and a smooth line of talk about how age doesn't matter.

She is shocked to the point of tears. But this seasoned pedophile manages to stop her crying and convince her to come with him to a motel room. Anne's father who, upon finding out that his daughter has been taken advantage of by a  scum, starts becoming disturbed. He wants to find the guy and kill him. The  case also draws in the FBI. The rest of the movie is about the specific consequences of this particular crime, how it affects relationships, self-image and the family structure.
Analysis
Director David Schwimmer of "Friends" fame, aims for realistic depiction rather than the typical Hollywood thriller format that this could have turned into, especially after FBI agents get involved. His direction elicits our deep feelings and fears about the dangerous use of the Internet by pedophiles and the devastating impact their sexual assaults on children can have upon the victim's family. Clive Owen gives a standout performance as Will. He starts the movie as a loving, outgoing husband and father, then becomes angry and helpless. One of the excellent scene is towards the end, when  Clive Owen, breaks down saying that he has failed in protecting his child. Catherine Keener lends sympathetic support as the mother. Liberato as Annie, handles the wide range of emotions her part demands, as well as the transition from happy-go-lucky teen to traumatized victim. Charlie is well played by actor Chris Henry Coffey, because the moment you see this guy, you want to smash his face against the wall.

According to a statistics in America, in 2010 there were more than 8,000 reports of online enticement received by the National Center for Missing and Exploited Children cyber tip line. There were 3000 arrests that same year, but the disparity in numbers is sad proof that many of these creeps don't get caught. Don't think this subject of pedophiles is non-relevant one for a developing countries. The problem is , in developing countries incidents like this never gets reported and they don't have any strong laws.
"Trust" is not a crowd-pleasing revenge film. It does not offer justice to the damaged life’s/ family. Though it is rated R for "disturbing material involving the rape of a teen, language and some violence," the rape scene and the whole issue is handled discretely and sensitively. What Trust conveys, at its best, is that ultimately parental protections are not foolproof, and that is the greatest horror of all.
Trust might alert the teenagers to a real danger. It also helps them to see things differently and understand how parents and children so close to each other can suddenly, quickly become estranged during the teenage years.

An excellent film which portrays reality

adding the trailor video is a nice idea!!1

wow.. must watch this one. especially impressed that david schwimmer directed this.

Haven't watched this one..
Had watched a movie 'The Boy She Met Online' which too shares a similar plot.

the movie is in my watchlist...I've been through the plot...conveys the truth, which many teenagers need to know...