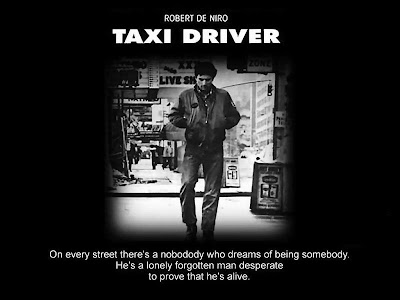 Most critically acclaimed films go through an awkward middle age on their way to classic status. This is especially the case if a film is influential

Plot
Travis Bickle (Robert De Niro) is a lonely, frustrated, and disoriented young Vietnam veteran from the Midwest who is working as a night cabbie in Manhattan. He despises "Sin City" with all its pimps and prostitutes, pushers and perverts. As a taxi driver, he stays somewhat sealed off from this ugly external world.. Life becomes brighter for a moment when Travis meets Betsy, a beautiful girl who works for a presidential candidate.
Betsy accepts to go out on a date with Travis, but it becomes a total mess and she leaves. Travis grows more and more obsessed and bothered by the stench of the city at night. He'd like to wash the scum off the streets.  At that time, he meets Iris, a  12 year old runaway and prostitute(Jodie Foster) who works for Sports(Harvey Keitel), a pimp. Travis becomes convinced that he has to transform himself into a dispenser of justice. Take action. But who will be the target of his anger?


Analysis
The brilliant Paul Schrader script is very original, complex and thought-provoking. We really get into Bickle's deranged world. It's the most intense character study I've seen. Robert de Niro's performance as the nervous and psychopathic Travis is a act of sustained intensity. It is to the actor's credit that he can involve us so deeply with this person's situation and rage. De Niro doesn't allow us to distance or disassociate ourselves from this character. He places us in the cab and by the sheer insistence of his performance takes us along for the whole ride. Taxi Driver marks the apex of De Niro's superlative career. Jodie Foster is surprisingly good for her age. Iris is not an easy part, especially for a young girl, but she's excellent. Harvey Keitel is very interesting as the despicable Sports.

We can look at Taxi Driver from various perspectives. The loneliness/alienation theme is easily traced. As he says “ Loneliness has followed me my whole life. Everywhere. In bars, in cars, sidewalks, stores, everywhere. There’s no escape. I’m God’s lonely man.” Travis is getting very sick from something that really is out there, even if other people are immune.


I enjoy revisiting Taxi Driver, but not for the reasons i watched it first time. If u want a cool gun-fight just fast-forward to the bloody climax. This is no ordinary movie to “just flush it down." It would be cool to do that to some really bad movies, but this one is one of the great ones--a classic that will stand for many generations to come. All in all a movie to be seen by any passionate movie lover, and yes do watch this alone , just to feel the alienation of the lead character.

This movie evolves very slowly and it portrays the other side of early america...
This movie's climax will be totally unexpected and it din't impress me much instead i hatred it...
Nice review :)
dee..

I don't remember the film much except for some parts .. just to think of it makes me feel anguished!

Useful info! I bookmarked it.

though the movie was shot long back, but still its easy to relate with in bits and pieces...thats the great thing about Cinema !!

THAT MOVIE IS NICE I HAVE IT IN MY COLLECTION AND ITS NICE INFO:)