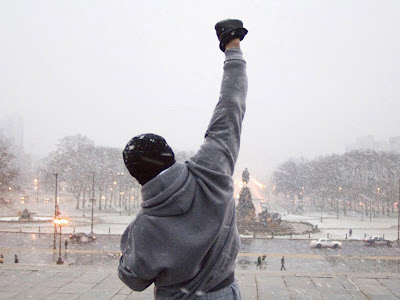 Speeches have the power to move you emotionally and to even change the way you think of life. Many movies are immortalized by their inspirational speeches. The way, our protagonist utters the words send chills down our spine,  and simultaneously fills us with hope and triumph. There have been many great speeches in movies throughout movie history, some a lot better than others. I have compiled a list of  some of the best moments in movies. There are hundreds of moving and motivational speeches, outside this list too.


Rocky Balboa's Words of Wisdom
Love him or hate him, Rocky is an American icon.  He teaches us lessons in how to live, love and pursue our most amazing dreams. It is amazing that the actor, Sylvestor Stallone, actually has a Rocky type story. He got hit, and he got hit hard, but he kept coming back for more. He wanted to be an actor, and no one would have ever hired someone that looks like he does and that talks out of the side of their mouth like he does. But he got hit and came back, true inspiration. For anyone looking to take their career to the next level, this scene from Rocky Balboa provides tremendous inspiration.

He shares with his son,  “Let me tell you something you already know. The world ain’t all sunshine and rainbows. It’s a very mean and nasty place and I don’t care how tough you are it will beat you to your knees and keep you there permanently if you let it. You, me, or nobody is gonna hit as hard as life. But it ain’t about how hard ya hit. It’s about how hard you can get it and keep moving forward. How much you can take and keep moving forward. That’s how winning is done!”

Al Pacino In 'Any Given Sunday'
In this inspirational video clip, Al Pacino plays as a football coach, and provides an honest appraisal of himself and his team. He admits to making wrong choices and realizing that the only true living happens “6 inches in front of your face”. “Either we heal as a team or we will die as individuals”. Whoever wrote this speech must be a great writer.

Denzel Washington In 'Remembering The Titans'
"In Greek mythology, the Titans were greater even than the gods. They ruled their universe with absolute power. Well that football field out there, that's our universe. Let's rule it like titans." – Coach Boone says to his football team, Titans. The story takes place at the time of integration of blacks and whites in the high school, and this football team will have to deal with their color issues if they ever want to win a game.

Gene Hackman In 'Hoosiers'
The speech is highly motivational because, no one thought such a small school could possibly beat large schools in competitive, basketball-hungry Indiana, but that's just what these guys did.

Best Lines :
"Forget about the crowds, the size of the school, their fancy uniforms, and remember what you got here.....don't get caught up thinking about winning or losing this game, If you put your effort and concentration into playing to your potential, to be the best that you can be, I don't care what the scoreboard says at the end of the game, in my book we're gonna be winners."

Morgan Freeman In 'Lean On Me'
One of Morgan Freeman's earliest movies. He is a School Principal trying to take the school back from the Dopers & Pushers & Troublemakers so that the average kid can have a chance. State officials believe that the high school has nothing but loser students.  He inspires them to prove that they are not.


Best Line:
"We rise, we fall, we meet our fate together."

Alec Baldwin In 'Glengarry Glen Ross'
This speech stands out, because it's not a positive speech...Baldwin is just giving hell to these guys in the office, but he's still technically inspiring them to sell real estate. The entire speech is amazing.

Mel Gibson In 'Brave Heart'
The movie is based on the life of Scottish freedom fighter, William Wallace and it is just an incredible speech of sacrifice for something higher than ourselves. Just think about how you'd be feeling looking across a field at what was the strongest army in the world.William delivers the inspiration to his soldiers through his speech.

Best Line:
"And dying in your beds, many years from now, would you be willing to trade ALL the days, from this day to that, for one chance, just one chance, to come back here and tell our enemies that they may take our lives, but they'll never take... OUR FREEDOM!"

Viggo Mortensen(Aragorn) In 'Return Of The King'
This speech is given by Aragon, the king, at the black gates of Mordor. He was willing to give his life so that Frodo could have precious time to destroy the ring. Aragorn's quick speech incites strength into his men to fight the evil.

Best Line:
"There will be a day when the courage of men fail. But it will not be this day.

at April 20, 2012
Email ThisBlogThis!Share to TwitterShare to FacebookShare to Pinterest

Brilliant post. One of the most inspirational I've read.

I have read the content till Rocky. I do not have headphones (will check on Monday) but I wish to let you know that am glad I am on indiblogger to follow this blog, at least.

You add a lot of value to a reader's visit and that's something worth emulating, Arun.

These words are not so that you follow my blog or something but I do feel it from the bottom of my heart.

I hope you keep posting.

always thought rocky was a mindless violent film till i read this. nw i feel like watching it again

man! That was inspiring, good stuff!

@Divenita, Thanks for your appreciation. Will try to keep up with those appreciative words, and check out rest of the post too.

@confused yuppie, Thank you. Rocky I and Rocky Balboa are meaningful movies, rest of the parts are just mindless entertainment movies.

A great collection of fine speeches. And I am not surprised the bulk is made up of sports movies. We do have lot of quality sports based movies coming.

Even if the 'talks' posted here may not be BEST ones or may not be completely exhaustive, the effort is indeed highly commendeable.
Great Job.

They are all truly great lines. The one that moved me the most was the last one:

""There will be a day when the courage of men fail. But it will not be this day.

@Ramakant, Thanks for your comment. Yeah, sports movies has the best inspirational speeches.

@sangeetsomakumar, Thanks for visiting the blog and for commenting.

@Heaven on Earth, Thanks for your comment. Will definitely do a 2nd part comprising more best speeches.

Nice list. I would also say the Pursuit of Happiness is one motivational movie that I like most.