No Country For Old Man - The Embodiment of Evil 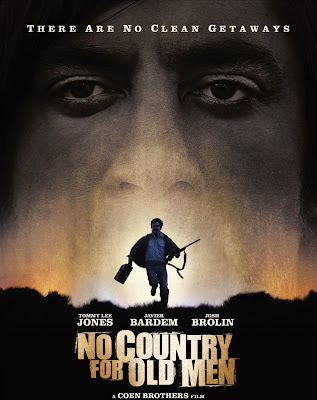 Life isn't fair. Be it the sudden, unexpected loss of a loved one or your boss messing up the job by dropping a ton of busy work on you at the last second on a Friday, it’s all just not fair. But it’s also the way things go and there’s scarcely any way to control it. Such is one of the many overwhelming feelings you might get after watching the Coen Brothers masterful film “No Country for Old Men.”

At first, No Country for Old Men(2007) seems like another crime story, smarter than most, filmed and acted with extra care and attention, but a crime story all the same. And then a shift comes - not an abrupt shift of plot or mood, but something that has been gradually built, shot by shot, scene by scene - and it begins to dawn that this is something remarkable.


Plot
Texas, 1980. On a sunny, hot afternoon, a hunter named Llewelyn Moss (Josh Brolin) tracks a deer across a remote stretch of grassland, stumbling upon the remnants of a bloody gun battle between warring drug cartels. Bodies are strewn on the ground, vehicles are bullet-ridden, and there is even a dead dog amidst the carnage, then he finds a briefcase containing $2 million. Llewelyn, is no fool. He knows that dangerous people are bound to come looking for their cash. 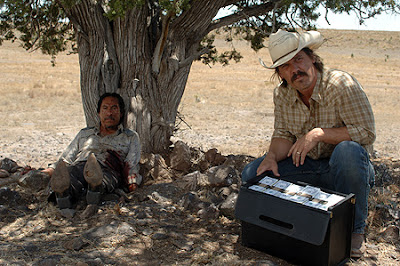 He’s confident he can handle anything any man can throw at him, and begins taking steps to go into seclusion. But what’s hunting Moss is no man. On his trail is a brutal and brilliant killer named Anton Chigurh (Javier Bardem). More force of nature than man, Anton is the perfect assassin, free of all the things that hold normal men like Llewelyn back. The most basic emotions fear, compassion, and indecision are foreign concepts to Anton. 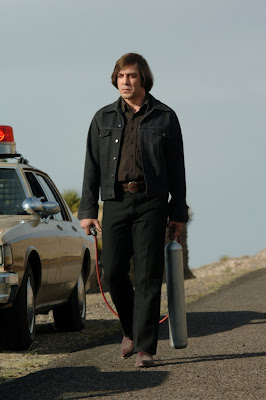 Meanwhile, local Sheriff Ed Tom Bell (Tommy Lee Jones) is looking to stop all this mayhem.  He comes from a long line of law enforcement officers but clearly feels unequal to the task of dealing with all the deaths connected with narcotics.


Analysis
No Country For Old Men is a meditation on American violence and the nature of evil. Based on the novel by Cormac McCarthy and written and directed by Joel and Ethan Coen, "No Country" feels positively great in its magnitude, a movie about fate, age, time and life. "No Country" is not about comforting viewers but disturbing them, and it's not about entertaining in the moment, but about showing something that will linger for days. 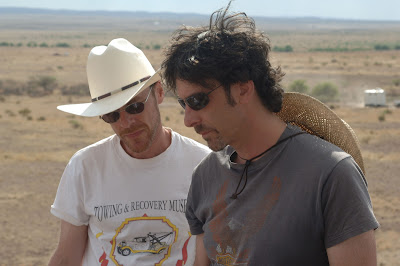 No Country for Old Men is artsier and deeper than most anything else the Coens(Ethan and Joel) have done. The visual mood of the vast desert landscapes and dusty small border towns is matched by long stretches of silence, punctuated only by everyday sounds. It’s a bold experiment that succeeds wonderfully; the silence not only draws us in more closely, but it allows the story’s sudden fits of violence to shock all the more. Roger Deakins' cinematography perfectly illuminates the beautiful and indifferent landscape.

Brolin, Bardem and Jones are spot-on with their performances. Jones, who gets notably less screen time than his co-stars, has never been better or given a more commanding presence. Bardem delivers by far his most effective performance as the enigmatic, deep-voiced Chigurh. He sometimes offers people a coin toss to determine whether they die or go on. Bardem’s Chigurh is patient, never showing even a flicker of anger; he’s the most frightening thing I’ve seen in a movie, next to the character of Hannibal. 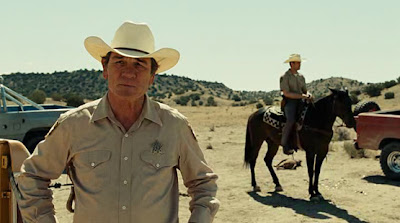 Josh Brolin as Llewelyn Moss is also excellent as the everyman hero, a guy you sincerely want to see succeed but who also seems doomed to failure. Kelly Macdonald as Llewelyn’s faithful wife Carla who adds a insight to each character, lending a human touch to the whole affair.
The Coen brothers provides us a indigestible ending, and this may upset audiences who want to see the world righted by the end. The simple satisfaction of traditional showdowns is evaded for a lyrical note that strikes both as deeply pessimistic and strangely pure. No Country for Old Men is so violent that it will turn off many movie-goers who have a aversion for bloody mayhem. Yet there is a real attempt here to ponder what has gone wrong in a country where violence has become more widespread and eccentric. 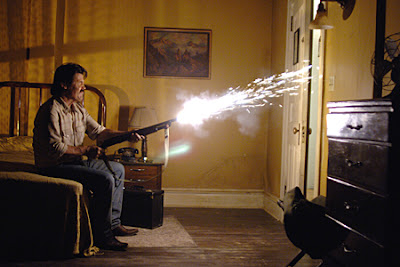 It’s a movie that compels you to lean in, get closer to the characters, take another step down that dark, endless tunnel. Sheriff Ed Tom Bell , at one point notes that, "Any time you quit hearing Sir and Ma'am, the end is pretty much in sight." This is a spiritual reading of a major reason for the rise in violent crime in American society. When simple respect vanishes along with common courtesy, the reverence for life is diminished. Everything becomes disposable and worthless, including human life.
No Country For Old Men is both a searing thriller and an mournful poem for a collapsing society.
Trailer
No Country For Old Men - Imdb

It is a hard movie--I shuddered so many times. But yes, a great one-- fantastic dialogues, great acting, lovely character building--but hard, hard, hard on the soul. Your post does a good analysis of the movie!!!

@Abhyudaya, Thank you for visiting the blog, and for the comment.

@Bhavana, Thanks for your comment. Yeah, a very hard pessimistic view, but a good one.

It's a brilliant movie which unfortunately I had to watch on the small screen. Would have been fabulous watching it on a bigger screen.

I am hesitant to watch this movie, for which I was curious. I am not a dark movies.

Really enjoyed reading your analysis, as always. Btw, I reviewed it recently on my blog... it's a film that's been growing on me ever so slowly... I have now watched it at least 5-6 times.