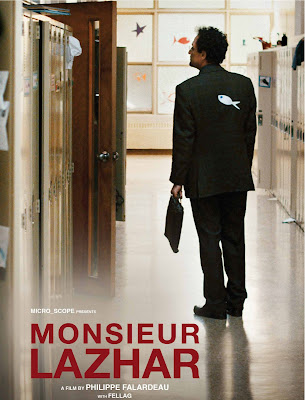 The grief inflicted by suicide may be the hardest of all to bear. Although the pain is over for the one who died, and his problems, in their way, answered, the survivor is left only with questions. Suicide is the cruelest death of all for those who remain.  . . each day the survivors face the gut-wrenching struggle of asking themselves why, why, why?" That is the wrenching setup for "Monsieur Lazhar," a film that offers a very specific story about a universal question: How do we get past tragedy?

Movies about teachers are supposed to be inspiring, and uplifting, just as we crave inspiring teachers. The immigrant teacher takes over troubled class, may sound like a simple story, but director Falardeau's alternately charming and troubling drama is far too complex for easy reactions, or conclusions. Based on the 2002 one-man stage-play, Monsieur Lazhar is tender and sincere, frequently striking a fine balance between the orders of the “inspirational teacher” genre and a more mundane kind of realism that presses down easy sentimentality and strives for something more genuine.
Plot
After a teacher hangs herself in a Montreal middle school -- the reasons are vague -- the previously unknown Bachir Lazhar (Mohamed Fellag) applies for the job. Presenting himself in the office of the principal, Lazhar say he's a naturalized Canadian citizen who taught for 19 years in his native Algeria. His French is impeccable, his caring nature and love of children unmistakable, and the job is suddenly his.

The  teacher's suicide seems to have had an especially hard impact on two children, Alice (Sophie Nélisse) and Simon (Émilien Néron). They are friends, but the death causes a rift between them. It's not an easy fit fro Lazhar. When he gives one misbehaving student an absent-minded smack on the back of the head, he’s brusquely informed that no touching is allowed, in anger or in affection. Monsieur Lazhar struggles with his students’ need to mourn their former teacher and to give voice to their careening emotions.
As the film moves forward, we learn that Lazhar has his own tragic past, one that makes him both uniquely suited to help the eight-year-old's in his charge, to say, “move on.”
Analysis
Even though the movie is adapted from a stage play, writer/director Philippe Falardeau makes sure there's no sense of staginess here at all. As is typical of classroom films, we get to know students by their individual quirks — the fat kid, the sickly boy — but Falardeau manages to make such introductions feel organic. He also develops his minor characters just enough to make them feel alive.
Falardeau has done an astonishing job in finding child actors to portray the wise and immature kids in Lazhar's class, especially Sophie Nelisse and Neron. They both stand out as Alice and Simon. Algerian refugee Mohamed Fellag harbors his own pain in the role of Lazhar. The pain in his eyes, even when he is smiling, is always evident. The empathy he gives Lazhar is practically heroic, ultimately heartbreaking.

Falardeau doesn't offer up easy platitudes or chummy resolutions. The film just isn't that Hollywood-convenient. Monsieur Lazhar and the kids all do seem to move forward, but nothing is ideal and nothing is guaranteed. The film is not only willing to take on thorny issues of violence, ethics, and how adults keep faith with children, but has the courage not to lie about them. 'Monsieur Lazhar' sort of achieves a crystalline perfection by simply telling the truth.
It's a touching story for showing us the aftereffects of such a tragedy and what wonders can be done by caring and compassionate souls like Lazhar. In Monsieur Lazhar, we learn emotional honesty, a lesson never too old to learn.
Trailer
Monsieur Lazhar - IMDb
at June 21, 2012
Email ThisBlogThis!Share to TwitterShare to FacebookShare to Pinterest
Labels: Coming of Age Movies, Family Drama, Feel Good Movies, Social Drama

Need to watch this one. Will check it out soon

Loved this movie. Thanks for recommending it :-).