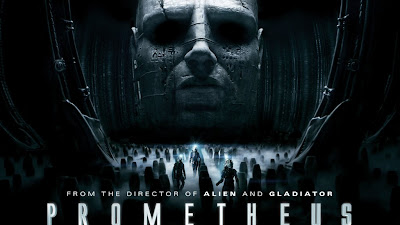 From the moment it first began production, "Prometheus" has been one of the most eagerly anticipated films to come along in recent memory. Part of this is because it marks the return of director Ridley Scott to the sci-fi genre that he revolutionized with his landmark classics "Alien" (1979) and "Blade Runner" (1982). Part of this was due to rumors that the film was actually going to be the long-awaited prequel to "Alien" that Scott has alluded to do over the years.


Years after "Alien" devolved into action fare ("Alien 3") and self-parody ("Alien vs. Predator"), Scott makes his long-awaited return to the material with "Prometheus." Does it do justice to the original? Well, yes and no. "Prometheus" repeats many past glories, with its intricate and dazzling visual effects, but it won't  be a genre benchmark, because of a squishy plot.


The world is drenched with mystery and no matter what we do, we can never cut through it all and grab hold of the answer. All the major religions and spiritual paths have challenged us all to remain open and reverent in the face of such daunting mysteries as the origin of the universe and the complexities of human nature. In 2093, Prometheus spaceship discovers a plausible source of human life in a distant planet, and sets out to find the mystery of our existence.


Plot
An archaeologist named Elizabeth Shaw(Noomi Rapace) and her scientist boyfriend Charlie Holloway (Logan Marshall-Green) discover different cross-cultural pictogram that shows human figures pointing toward a distinct planet formation. On the basis of this discovery, they receive corporate sponsorship for an exploratory mission to a galaxy that fits the formation depicted. 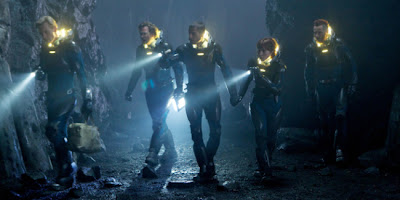 The expedition was commissioned by ghostly corporate CEO Peter Weyland (Guy Pearce) and is directed by Miss Vickers (Charlize Theron). Most of the scientific calculations are conducted by the ultra-precise automaton David (Michael Fassbender). Arriving on the rugged, outwardly lifeless moon, the 17 crew members notice pyramid-like structures that were clearly not fashioned by nature. Inside, the elaborate tunnels and chambers possess moisture, elaborate writing, a large statue of a human head and, more alarming, countless small cylinders that produce a sticky mud-like substance.

As you can probably surmise, there is much that happens from this point and doesn't take long for the crew's number to be reduced by untoward circumstances.


Analysis
From the rush of amazing landscapes to the crunching, explosive, just plain huge finale, Scott delivers a feast for the senses. 'Prometheus' is a strong testament to Scott's sense of balance that the build up in this movie is every bit as engrossing as "Alien." But, Scott  lures audiences with thought-provoking possibilities, then travels into a familiar monster thriller and fiery explosion-fest. Another failing is Scott’s lack of engagement with character. David the robot  is the only one who gets a little time to show us who he is, and though the scientists, intriguingly, have Christian convictions, Scott doesn’t do as much with science versus religion as he could have. 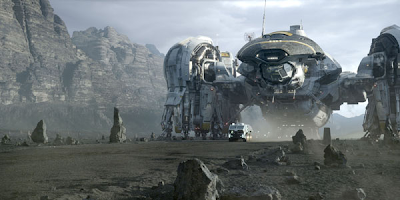 The screenplay by Jon Spaihts  and Damon Lindelof  adheres closely to the original "Alien," from having a corporate type (Charlize Theron) aboard, and having an android (Michael Fassbender) running interference. The script loses that carefully wrought mystery and plunges into slimy confusion. Bodies implode, heads get decapitated, and the unfortunate Noomi finds herself impregnated with some Alien and gives a self-performed C-section. The script slides down and drags along the plot towards a climax that lacks any punch. 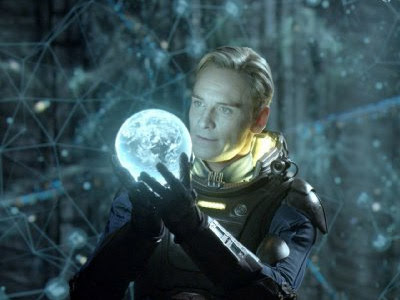 Michael Fassbender is creepily compelling as the android David. Even as the plot’s ambiguity borders on inscrutability, Fassbender operates with a distinct sense of purpose that leaves scenes less fascinating without him. Noomi Rapace as a strong female protagonist certainly delivers the goods. Her part calls for a blend of toughness and vulnerability, which she capably conveys. Charlize Theron, as the tougher corporate rep, overseeing the mission, plays the steely voice of reason. 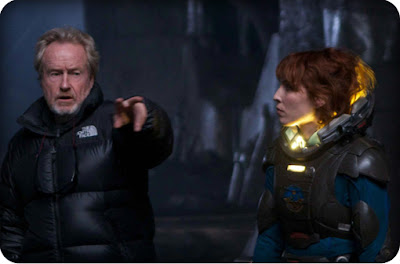 Marshall-Green is a bit more foolhardy, and harder to like his character for it. Idris Elba makes for a likable Captain Janek. Guy Pearce wears a few pounds of aging makeup as Weyland, the elderly head of the Weyland Corporation. When it comes to technical wizardry and sheer visual spectacle, Prometheus unequivocally delivers. The film's other-worldly beauty, especially  its depiction of space landscapes and dreamlike visions are grand.

The most interesting dimension of Prometheus is all the time, energy, and money put into the quest for scientific proof of the origin of humanity. Both Charlie and Shaw are seeking answers and are surprised by the aliens who have their own definitive response to these outsiders and their questions. Those going into Prometheus expecting a fast, crowd-pleasing sci-fi action thriller will be disappointed - "Prometheus" is not that kind of movie. At the same time, those who go into "Prometheus" looking for a deep existential experience may also be disappointed.

Prometheus isn't a classic, unlike Alien and Blade Runner, but there are enough quality ingredients like its wonderful visuals, to make us hope that Scott gets the money to make a more promising sequel.
Trailer
Prometheus - Imdb

Loved the starting footages. The nature in her best. I wish it was more colorful than the subdued tone used in the movie. :)

very true, watched it yesterday. A bit disappointed I will say!!

I missed this one. Your reviews sophisticated, not simple, yet compelling.

Only thing that happened in the whole movie was a woman giving birth to an octopus.