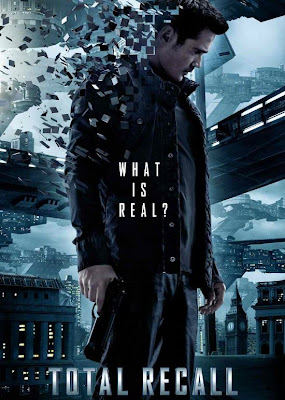 The 1966 short story by the visionary dystopian Philip K. Dick, confronts Earth, which has been devastated by chemical warfare, leaving only two populated areas connected by a tunnel through the planet’s core. Like George Orwell's celebrated novel, 1984, this premise contains the seeds of an interesting political and economic allegory. In 1990, Arnold Schwarzenegger and sci-fi director Paul Verhoeven collaborated to make the R-rated 'Total Recall,'  which shifted the story to Mars, and maintained some of those mysteries and allegories. 22 years later, Len Wiseman's "Total Recall" has now reached the screens, which has maximum noise and minimum sense.

Most of the time, Hollywood  borrows wonderful Sci-fi premises and brings it down to a movie with lot of chasing, shouting and fighting. Total Recall belongs to that category. The funny theme of this movie is persistence of memory. Its funny, because the movie seems to fade almost immediately from our conscious.

Plot
Douglas Quaid (Farrell) works in a manufacturing plant that makes synthetic cops, and lives with his wife Lori (Kate Beckinsale).They live in a ratty apartment in the place called "Colony," which is more architecturally indebted to Ridley Scott's "Blade Runner." Quaid's daily transport involves taking The Fall, a massive rocket-type elevator that travels through the core of the Earth. The group of European nations called the United Federation of Britain and its chancellor, Cohaagen (Bryan Cranston), is hellbent on squashing an uprising Down Under by a mysterious revolutionary known as Matthias (Bill Nighy). 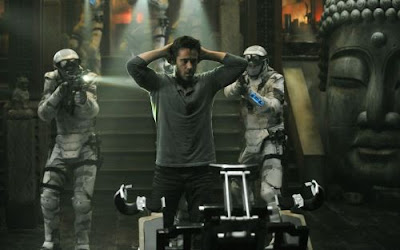 Quaid feels that there's something missing from his life and he only discovers what it is on a trip to Rekall, a corporation offering to implant fake vacation memories. The trip uncovers a startling truth. It turns out that Quaid is a secret agent. But Quaid has no memories of his life as "Hauser" and no idea what he was like or who he was working for. Was he a Cohaagen's man or a rebel? And who is Melina (Jessica Biel), the dark-haired girl who appears in his dreams?
Analysis
There's nothing original about Wiseman's Total Recall, but for the first hour or so, you don’t mind. We have Colin Farell, as the film's nominal star, and we see the stylish and atmospheric look of not one but two different future worlds. But director Len Wiseman comes in the way and  blows up both the story and the digital worlds. The real star of this movie is the men and women assembled by production designer Patrick Tatopoulos. The future, as depicted here, is filled with all kinds of nifty technological wonders, from hand-embedded cell phones to identity-concealing neck rings, and a  labyrinthine network of criss-crossing elevators. 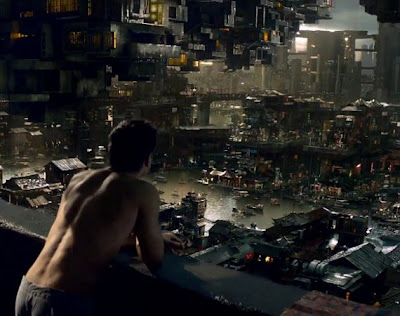 Colin Farrell's soft-eyed vulnerability makes sense for his character, who finds hardships at every turn. Kate Beckinsale plays Lori like she's still in one of those Underworld movies. Jessica Biel as Melina, plays Doug’s once and future freedom-fighting girlfriend. Bryan Cranston as the villain is better than most of the Hollywood's evil political overlords. 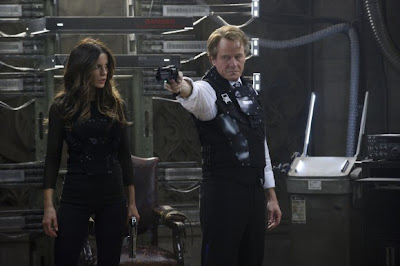 Screenwriters Mark Bomback and Kurt Wimmer  run out the clock with uninspired chase scenes. Director Wiseman's vision of a grim world, although highly derivative of other dark, futuristic science fiction enterprises (Blade Runner and The Fifth Element come to mind), is vividly represented. At the same time, he over-compensates with lots of noise and hectic action. Is Quaid suffering from a paranoid delusion, or was his memory replaced by villainous forces? This is the key question, the movie should have asked us, but it takes a back seat to the relentless action sequences.
After too many chases, you might feel that there is nothing very futuristic, or entertaining, about Total Recall.
Trailer
Total Recall - IMDb
at August 05, 2012
Email ThisBlogThis!Share to TwitterShare to FacebookShare to Pinterest
Labels: Hollywood Movies

I was utterly disappointed. It was a bad start to the weekend. I hope this coming week entices me with GOW 2 and Bourne Legacy lined up for release :)

I was planning for it this weekend. Looks like your review saved my time... Thanks :)

Good review Bro...There are no surprises for me as TR was a torture.. :)

I wish they would leave Philip K. Dick alone. Thanks for the warning.

I still remember the original and wanted to see this one. Now i will not :)

Good review Arun. This film was a whole bunch of fun and even though it was very predictable, I still turned my brain off for a good 2 hours and enjoyed myself. Also, can't go wrong with a cast like Biel, Beckinsale, Farrell, and Cranston, just to name a few.

@Haricharan, Yeah, this weekend we have two great films releasing.

@Ashwini, Thank you for spending the time in reading my review, and avoiding the movie.

@Raj, Thanks for the comment. "Torture" was the right word.

@shovonc, I too wish they leave Philip Dick's name in making these loud action movies.

@Meoww, You could try watching it after the DVD release.

@Ghazala, I watched this movie, because of its original movie. But, it's a disappointment.

was thinking about going for it.. i guess you saved me a few bucks.. thanks :D

@abuginmymind, Thanks for reading the review.

Being a Colin Farrell's fan was the only interest i had in this movie. I think i can skip this one. Thank you Arun.
Title of this post made me read it completely. :)