Privacy nurtures and shields our authenticity and uniqueness. The absence of it, may  lead to violation, which often contributes to dehumanize a individual. The Lives of Others is a tale of privacy invasion by East Germany's feared secret police, the Stasi, which carried out surveillance and intimidation of citizens on an astonishing scale. A film of slowly accumulating tension and power, Florian Henckel's drama - a best foreign film Oscar winner - is humane political thriller.

Powerful dramas mostly depict the character transformations. Such is the case with The Lives of Others, which might engage you to the life of a cold, dispassionate character, who takes us on a journey that transforms him from detached observer to involved enthusiast. The movie is set in the grim world of East Germany in 1984, where the powerful stasi, the secret police, had 100,000 employees and 200,000 informants.


Plot
Gerd Wiesler (Ulrich Muhe) is an esteemed, by-the-book member of the Stasi. He teaches classes about recognizing the suspects and their lying patterns. Wiesler is also a master interrogator, who was asked by his superior, Grubitz (Ulrich Turkur), to head up a surveillance mission of playwright Georg Dreyman (Sebastian Koch), and his actress-girlfriend, Crista Maria Sieland (Martina Gedeck). Wiesler wires the playwright's apartment, and along with his assistant monitors all their activities. 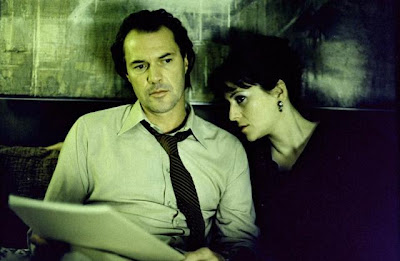 Wiesler believes in the trueness of his work, so he is shocked when he learns that Minister Bruno Hempf (Thomas Thieme), a former Stasi officer now turned Head of the Cultural Department,  has instigated this investigation to blackmail Christa-Maria into sleeping with him. And so, Weisler develops protective instincts for Dreyman and Crista and makes the leap from observer to participant, and the film slowly builds to a suspenseful climax.


Analysis
Director Florian Henckel von Donnersmarck's feature debut is a cunning piece of construction. He wonderfully captures the drab architecture of totalitarianism, the soul-dead buildings of a soul-dead state. The complex script balances the many emotional and dramatic strands between the characters with poise and clarity. Even though the film is small-scale and has almost no physical action, it grips you from the opening frame simply through the power of the performances and the way in which it doesn't stray down the usual political-thriller paths with simple stereotypes. Florian also does a commendable job in showing the events and interaction from two perspectives, that of the participants and their observers. 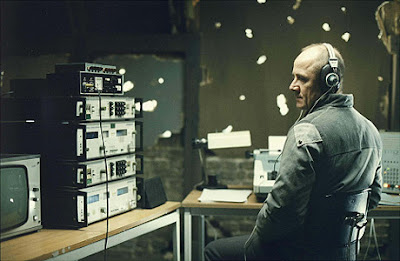 Ulrich Mühe, as the captain, takes up the challenge quite easily. He captures the gradual changes to his character with great coolness. Conveying much through the smallest actions, Muhe is especially good opposite Tukur as his sly superior. Sebastian Koch is effective, but not able to steal the film away from Muhe. Gedeck is extraordinarily good as Crista, the actress torn between her career and personal emotions.
Films mostly appeal to our best and worst instincts. In Lives of Others, we fear for the freedom of the vulnerable couple, yet on some level it’s a thrill to spy on them along with Wiesler—to listen in on mundane conversations. However the film's cruelest irony  is that whenever Wiesler manages to do something decent, it always rebounds on the people he seeks to protect. Also, in the former phases of the surveillance, Wiesler's face remains expressionless; he's like a robot doing a job. But, his persona gradually changes later, and show signs of tension and erosion.
One of the best and effective scene in The Lives of Others is about the transformation that has taken place in Wiesler during his surveillance of the playwright. Standing firm in an elevator in his own apartment building, he is joined by a little boy with his football who looks up at him and asks, "Is it true you work for the Stasi?" Wiesler is stunned and can only reply, "Says who?" The boy responds: "My father." Habit rushes into gear, and he asks, " So what is the name of . . ." before stopping in mid-sentence. "Of what" the boy asks. After a few seconds of awkward silence,  Wiesler responds, "Of your football?" The boy is surprised and says authoritatively, "You're crazy! Footballs don't have names!"  It is this kind of intelligent sequence, makes us feel that the movie is believable and organic, not a contrived one.

The Lives of Others is not just a political thriller, its a story of humanity finding its way out of the darkest corner. It is a compelling story of moral and political redemption.
Trailer
The Lives of Others - IMDb
at August 07, 2012
Email ThisBlogThis!Share to TwitterShare to FacebookShare to Pinterest
Labels: Hard-Hitting Movies, IMDb Top 250, Social Drama, Thriller

One of the best foreign films of recent time. Guess, now I have to review this one ) Good one!

A powerful write up of an equally powerful movie. Everything about the movie is just so brilliant and I simply love the movie's ending!!!