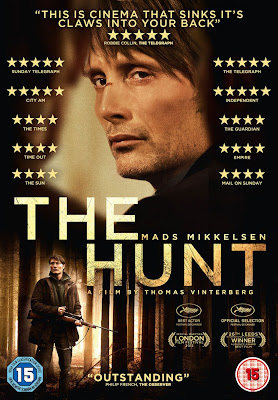 Danish director Thomas Vinterberg revisits the child-abuse theme, 14 years after his acclaimed 1998 work, "The Celebration" (Festen). After the stunning debut, Vinterberg didn't make any great movies or won any major awards, but his new film "The Hunt" (2012) is directed with a confident adult eye. It is a sharply focused, compelling drama about the ripple effects of a false accusation. The movie premiered at 2012 Cannes Film Festival, and its lead actor Mads Mikkelsen (James Bond villain in "Casino Royale") deservedly won the best actor award.

The film starts in a small Danish town. The men inhabiting in the town are from hunting community, who always esteem the taste of a game. When the movie starts, we see middle-age men, drinking in the woods and daring one another to jump in a cold lake. Theo (Bo Larsen) strips down and takes a dive, while the others were hollering and hooting. Eventually, Theo's best friend, Lucas (Mads Mikkelsen) fishes him out and they begin their trip back to society, singing and joking. This opening sequence shows us the kind of men with whom the whole movie revolves. These men commit even their smallest activities with suggestions of violence. Their emotions and actions are always marked by a mixture of earnestness and bewildering aggression. 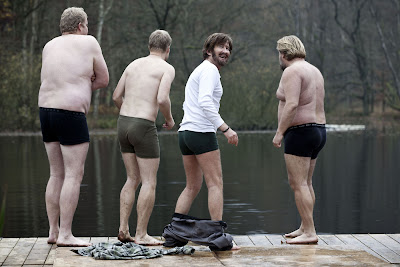 Lucas is the only guy who stands out from this crowd. He is a divorced kindergarten teacher, who is striving hard to get the custody of the teenage son Marcus (Lasse Fogelstrom). He is very popular with the kids. He also begins a relationship with Nadja (Alexandra Rapaport), a co-worker. Lucas is so adorable that one of his kindergarten students, Klara (Annika Wedderkopp) -- daughter of Theo -- has a crush on him. Klara's parents fight a lot at home. Her teenage brother is busy looking at dirty pictures (sometimes shows it to her too). She is a loner, but likes Lucas since he treats her very kindly. Klara makes a paper heart to Lucas and gets hurt, when he returns it back and asking her to give it to a boy of her age.

When Grethe (Susse Wold), kindergarten's supervisor confronts the five-year old about paper-heart, she makes up a story. Influenced by her brother's iPad porn images, she accuses Lucas of exposing himself (and forced her to touch his penis). Convinced that the children are always truthful and angelic, Grethe stupidly informs Klara’s parents and then all the other children' parents at the school. The angelic-looking Klara is soon perceived as a victim by everyone in the community and Lucas is quickly labeled as a sexual predator and jailed. Lucas' son, Marcus and a friend Bruun (Lars Ranthe) firmly believes that he is innocent. 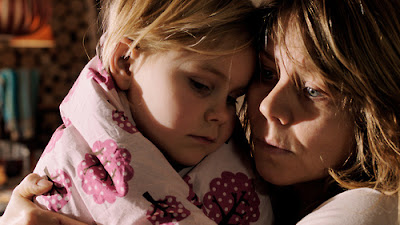 Vinterberg and Tobias Lindholm's screenplay establishes the devastating effects of a lie. The gritty script shows how easily the bonds of trust and friendship are shattered after a sexual abuse accusation. The directorial restraint of Vinterberg and the unobtrusive autumnal images of DoP Charlotte Bruus make it very painful for us to watch the few violent outbreaks. The last shot of the film really left me numb with shock -- gave a troubling thought that witch hunts will always be with us, even in the modern era of instant communication. There are many narrative shortcuts in the movie too: there seems to be no law in the town, and Lucas speedily becomes the castaway without any sort of disbelief, and he gets accused by whole lot of students with the same false accusation.

Mads Mikkelsen is always known for his dark and violent characters ("Valhalla Rising", TV Hannibal Lector). This time he surprisingly impresses the viewers as a warm-hearted man, who has a great emotional toll. As Lucas he brings out a large set of emotions. Every emotion rings true to the character's situation: the easygoing warmth, sudden bursts of rage and obscure agony felt in the final shot. Wedderkopp as Klara effectively conveys the paranoia. Her performance as a girl caught up in something she can barely understand, will definitely make us squirm. Bo Larsen is excellent in the second-half as he fleshes out a precise picture of male bonding that bristle with danger. 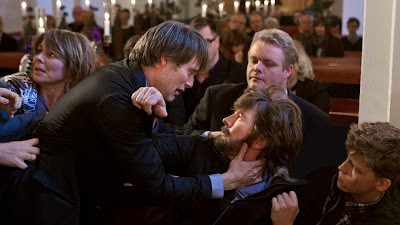 The movie tries to find a resolution that reaffirms the human decency, rather than resorting to violent outbursts. Lucas' life seems to be restored. Then comes the final shot, which leaves many questions open to debate: why in a tightly knit community, people always assume the worst and care less about the truth; Why there is a herd mentality when a situation is more complicated? Why women are quick enough to believe that heinous evil always lurks in the hearts of men?

"The Hunt" is a hauntingly powerful drama, which is bound to leave the viewers in a state of high anxiety.

deservedly won the Best Actor
about the effects of a false accusation
at July 19, 2013
Email ThisBlogThis!Share to TwitterShare to FacebookShare to Pinterest
Labels: Hard-Hitting Movies, IMDb Top 250, Social Drama

Nice review. Very well written. Based on ur words, i will def watch it :-) Keep writing, i will keep reading. Good luck.