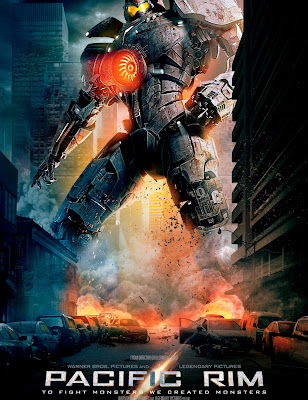 Everything you believe that it is going to happen eventually happens in Guillermo Del Toro's "Pacific Rim." It has thinly developed characters, wildly derivative story and has its share of hard-to-follow battle sequences. It is what you expect after seeing the trailer and from a summer blockbuster: monsters stomping on iconic city skylines and giant robots pounding on monsters. Familiarity and predictability doesn't much matter because the 130 minute movie is conveyed with maximum expertise. It causes the kind of mayhem that can only be enjoyed in a big screen with excellent sound system.

The movie starts with a voice-over prologue of what has gone from 2015. Many disgruntled "Kaiju's" (an alien race of giant monsters) is invading our earth through a portal deep in the Pacific Ocean. They smash cities all over the world to rubble, until we discover giant manned robots known as "Jaegers." The 25-plus stories high robots, piloted by two mind-linked humans goes toe-to-toe with Kaiju. The giants are defeated and Kaiju has become toys for children, until the gang of aliens and its masters regained their power and came back stronger than before. 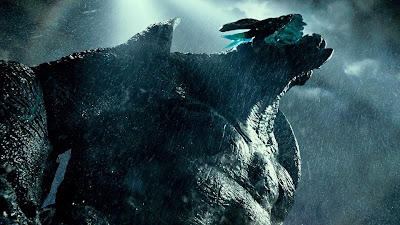 Raleigh Becket (Charlie Hunnam), a self-confident Jaeger pilot has lost his beloved brother and co-pilot in a battle with Kaiju. After his brother's death, Becket leaves the piloting and takes a job at the ill-fated "Wall of Life." Over the years, the monsters have become bigger and very dangerous and the jaegers are systematically destroyed. Led by Marshal Pentecost (Idris Elba) the Jaegar project is de-funded, which eventually forces him to go underground and work with the last four Jaegars. Becket is paired up with Mako Mori (Rinko Kikuchi), who wants revenge against the kaiju.

Unlike Emmerich or Michael Bay ("Transformers"), Del Toro isn't here to just show off his high-tech toys and awe inducing visual effects. He cares about other things such as character developments and narrative progression (cliched or not). The "wow" factor is paramount, but even with the unimaginable size of the whole action, we never get the feeling that Del Toro loses control of his battles and effects. "Pacific Rim" isn’t completely bereft of del Toro's hallmarks: A little red shoe holds a key to Mako's childhood trauma -- in a del Toro film childhood always represents war (inner-space or real); the black market located in a neon-soaked Hong Kong; a Jaegar washed up on a misty seashore like a fallen Titan from Greek myth. 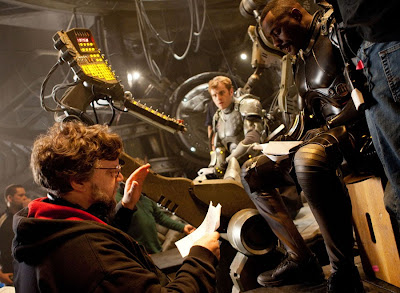 The pacing in "Pacific Rim" is perfect. There is breathing space before any gorgeously choreographed fights so it’s not just one booming attack after another. Hunnam and Kikuchi are effective enough as the movie's ostensible stars. Elba as the Jaegar commander gives an idiosyncratic performance. His rousing battle speech, “Today, at the edge of our hope, at the end of our time, we’ve chosen to believe in each other ... Today we are canceling the Apocalypse!” is  excellent. Burn Gorman and Charlie Day as the geeky, rival scientists are added for comic relief but they are distracting and lame. Ron Perlman ("Hellboy") makes a charming cameo as black-market kaiju organ dealer. The 3-D effects are used effectively but since 80% of the movie happens at night the amount of light that reaches the viewer's eyes is an issue.

During the Hong Kong action sequence Jaegar boxes the ear of "category 4" kaiju using a couple of shipping containers: a dumbly brilliant sequence with the right amount of cartoon majesty. That's how the whole movie could be described. Del Toro's "Pacific Rim" isn't a freak-out exercise like “Pan’s Labyrinth" or “The Devil’s Backbone.” It is an accessible blockbuster with a sheer visceral rush.

watched it in 3D and it gave me a big head-ache. I guess it would be more enjoyable in 2D.

Also the epic scene was where they use half-boat as hammer to thrash the kaiju. wonderful it was.