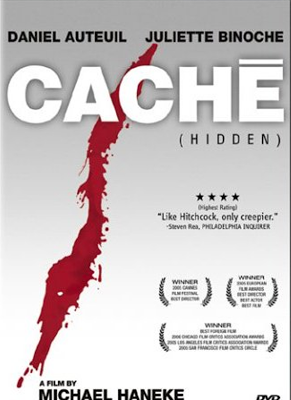 Movies are largely an act of seeing, but Austrian director Michael Haneke's films don't implicate understanding or perception. From "The Seventh Continent" (1989) to "Amour" (2012), he is not only a master of smothered violence and spellbinding suspense, but he's also a acute observer of human behavior in extreme crisis situations, as was the case in the psychological thriller, "Cache" (Hidden, 2005). This film has a top-most mystery level, but it can't be seen as a pure whodunit because viewers who don’t get the deeper currents are likely to feel cheated by the deliberately open ending. It is better to watch "Cache" without guessing the plot.

The film begins with a very unique shot: a nondescript view from a side street of a gated townhouse entrance, thick with passersby and parked cars. The shot lingers there for minutes and eventually takes us to a couple talking elliptically to each other (we see them from a distance). Images we are seeing begins to rewind and we see the couples watching themselves on tape, who are as lost as we are. The husband, Georges (Daniel Auteuil) gets out and tries to check out how he could've not seen the footage being shot. Georges -- famous host of a TV talk show-- and his wife, Anne (Juliette Binoche) -- works in the publishing business -- live in a fancy house on a quiet little street with their twelve year old son, Pierrot (Lester Makedonsky). 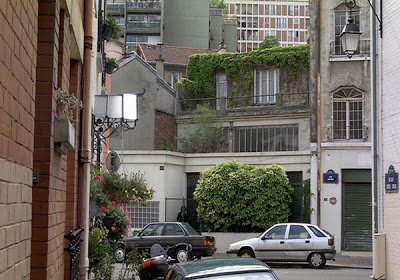 The tape show them coming to the house at different times. The couples, at first think that it's a prank (from Pierrot's friends), since the tape is accompanied by a macabre drawing of a child with a swath of blood streaming out of its mouth. When a second tape appears with the similar kind of footage, they seem bothered and call the police. Cops don't provide any relief, since there hasn't been an open threat. Their routine life if affected and tapes keeps on coming and gets more threatening. Georges claims that he has an idea about who is the perpetrator, but refuses to share this info with his wife, which puts their relationship on crisis mode.

"Cache" has strong political overtones: France's colonialist past in Algeria. Haneke says that he found the inspiration for this movie, while watching a documentary about the 1961 massacre of Algerian immigrants in France. He states in an interview that, "I was shocked that something like that could've happened in a liberal country." At the time in 1961, the police said that two protestors died. The historians say as many as 400 were massacred that day throughout Paris. France haven't addresses the issue for more than five decades. The subject of Algiers is still considered taboo. So, Haneke, with "Cache" miniaturizes the post-colonialist atrocity and injustices into a taut domestic nightmare. In the film, the tapes gradually and finally lead Georges back to a act of cruelty, committed toward an Algerian boy.

but can't share this privileged info with his wife, which, of course, throws the couple into a crisis mode - See more at: http://www.emanuellevy.com/review/cache-hidden-8/#sthash.5Zo4GQ5N.dpuf 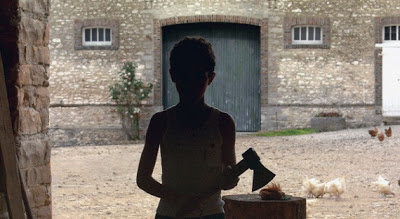 Michael Haneke has special interest in dealing with a bourgeois nuclear family and the loneliness, anonymity, disorders of city life. He studies paranoia created in both the domestic and political arenas and also the inability of a person to take responsibility for their own conduct. Georges statement in the film, "Terrorize me and my family and you'll regret it." shows the inability of the bourgeois to take moral responsibility for their own actions. Through this movie, Haneke has brought out flaws of the winning class out into the light of day. So, in that way the director justifies his title because the powerful residing whether in Paris or New York City or Mumbai want to keep things hidden.

Haneke's films have brief violent acts, but they strike alarmingly without warning or gimmick, neither different angles nor impatient edits foretelling its arrival. "The Piano Teacher", "Funny Games", Benny's Video" and "Cache" are all called as 'torture contraptions' by his detractors. Speaking about the violence in his movies, Haneke says, "I'm not sadistic. Art must confront what's in society, the injustices and conflicts. So, it's not sadistic to portray suffering— it's everywhere in the world." 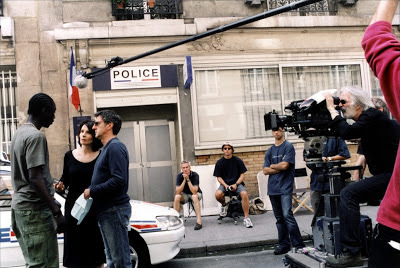 In "Cache", as a screenwriter, Haneke individualizes the characters enough (though politics is part of the narrative) as not to serve as an mouthpiece for First World countries versus small, under privileged Third World countries. Through the tapes, the director interrogates the nature of reality by blotting out the borders between the movie and the videos within the movie. So, in a way he states that, "What the viewer often takes for reality isn't reality; it's just another representation of it."

As Georges, Daniel Auteuil gives an measured performance, clearly feeling the fear,  along with his bourgeois complacency feeding his aggression. Binoche gives an comprehensive performance as Anne, complimenting Daniel with her own reticence and condescension. Maurice Benichou as Geroges' friend gives the most heartbreaking and haunting performance.

Viewers who are used to thrillers, in which every plot element is explained, will be frustrated with this metaphysical thriller. "Cache" is for mature viewers, who can take the mind games without expecting any overt film-making trickery.

as to not serve as ideological mouthpieces for First World countries (such as France and the U.S.) versus small, underprivileged Third World ones. - See more at: http://www.emanuellevy.com/review/cache-hidden-8/#sthash.5Zo4GQ5N.dpuf
deal with a bourgeois nuclear family threatened by forces - See more at: http://www.emanuellevy.com/review/cache-hidden-8/#sthash.5Zo4GQ5N.dpuf
Cache -- IMDb

See, I didn't like this one too much. My flaw with it was that it dragged on a bit too long, especially the final scene. I had no idea the movie was going to end and the credits just rolled. I get that it's slow paced, but it's a little too slow for my liking.

I really enjoyed reading your review, however. I always like hearing the other side's opinion of things. I always remain open minded, you never know, someone might put things into a perspective that I hadn't considered before. That's the beauty of talking films.

@ Grimm, Thanks for the comment. All of Haneke's movies feels a bit dragged. That's because he is not dealing with familiar themes or twists. Yeah, the first time, I too felt a bit cheated about that long ending.

I too agree with the fact that Haneke's movies are unhurried. They break stereotypical narrative,and try to get into the unveiled territories of human behaviour and reactions triggered by extreme situations. The slow pace of his movies don't seem deliberate. Instead they mimic the crawling pace of time in reality.

Good review indeed. Makes me feel to watch it again after 5 years.

I haven't seen this film. But this is in my list.