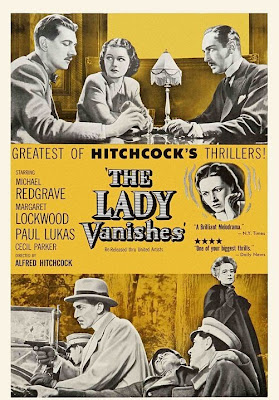 "The Lady Vanishes" (1938) -- Hitchcock's second to last British film -- elevated the suspense master's international stature. After this movie, David O. Selznick brought the director to Hollywood, where he made many classic movies, starting with "Rebecca" in 1940. Based upon a book named "The Wheel Spins", the movie was made on the wake of Nazism and a major war in Europe. Most of the themes in this movie are classically Hitchcockian: a mysterious banded surgery patient, a stolen code and a sinister imposter.

The film starts in an Austrian hotel, where a group of people are waiting for the next train: Charters & Caldicott (two silly Englishmen who talk of cricket and nothing else); Miss Froy (an old governess who is leaving the country after six years); Iris Henderson (a rich playgirl on her way home to get married); and Gilbert Redman (a whimsical collector of folk songs who keeps the rest of the hotel awake with loud music and dancing). Miss Froy tries to remember the song sung below her window, unaware that the serenader is strangled. As they board the train next day, Iris is hit on the head by a falling flowerpot intended for Miss Froy.

Dizzy, Iris is helped by Miss Froy, has tea with her and then falls asleep. When she wakes, Miss Froy is missing and no one remembers her (Caldicott doesn't want Iris to stop the train because he'd miss the cricket match and an English lawyer on an illicit romantic interlude doesn't want to get involved). Confused, Iris searches the train and gets help from Gilbert and Dr Hartz, the later explaining that a bump on the head can cause hallucinations. Iris tries to convince them that there is a conspiracy and eventually persuades Gilbert when he sees a discarded packet of Miss Froy's herbal tea.

They go to the boxcar to see if Miss Broy is hidden there and find her broken glasses -- a fight ensues with the Italian magician The Great Doppo, who disappears with the evidence. From that neat build-up, great suspense and gunfight ensues. The film ends with an exciting climax and with a nice tracking shot going into the foreign office, hearing the piano play the tune.

There are many vanishings in the movie: Just before Miss Froy vanishes, the Italian in the carriage does a magic trick with his hands. He is the Great Doppo, a stage magician whose best trick is "the vanishing lady"; at the shootout, Miss Froy vanishes herself into the forest; vanishings in the storage car using props. Waking Up/Sleeping is another one of Hitchcock's visual idea: in the film, only heroes sleep. The villains are always awake, dangerous, taking advantage of sleep. At the beginning in the hotel, there are many scenes with people going to bed, and Iris spends most of the film going asleep/fainting and waking up to chaos, the villains having done their dirty work. Both Gilbert and Iris pretend to be asleep when they are not drugged by Dr. Hartz.

The key to the movie is the title. Physically, Miss Froy vanishes, but emotionally the lady in Iris vanishes too, and remains lost. At the beginning, Iris is a bit stuck up but by the end, after she has been rejected by everybody on board, and her ladylike virtues have been stripped, her true character is revealed and she falls in love. There are many recurring ideas -- a usual thing in a Hitchcock: "The Cultured Villain." Dr Hartz of Prague is a respected brain surgeon who has worked on British heads of state, and educated man, who seems to be on Iris and Gilbert's side, but isn't. When they escape, he is still a nice villain and says "Jolly good luck to them."; "The Train" -- Hitchcock always love trains; "The Birds"; and "The Woman's Point of View." Iris -- an iris is part of eye, which is for looking, for shedding light on things -- is the central character and virtually everything is seen through her eyes).

The editing marked not only showcased Hitchcock's 30s style but eventually every film that had any aspirations whatever to achieving rhythm and suspense. "The Lady Vanishes" is Hitchcock's most sophisticated thriller with a neat comment on Britain's dilemma in the build-up to the impeding war with Germany. A delectable concoction.

This was remade into a Jodie Foster movie set on a plane instead of a train. Dont remember its name though.

@ Stagg Mann, Thanks for the comment. I thinking you are talking about "Flight Plan." It's not the exact same story and not as great as this classic. This movie was remade in 1979 and in March 2013, BBC telecasted a TV adaptation.