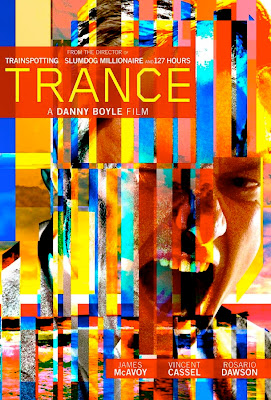 Danny Boyle has been a highly unpredictable film-maker when it comes to his choice of projects. The guy who directed the episodes of Inspector Morse (detective stories) made his big-screen debut with "Shallow Grave" (a dark crime/thriller) in 1994. He adapted a contemporary cult novel "Trainspotting", then he turned out to do a zombie movie ("28 Days Later"), made fables for children and adults ("Million", "Slumdog Millionaire"), a sci-fi opera ("Sunshine") and also an invigorating true story ("127 Hours"). He also masterminded the Olympics Opening Ceremony (2012) that baffled the cynics. His new film "Trance" (2013) is a notch below his classics, nonetheless an exhilarating brain-twister. The movie starts off as a heist-flick but eventually turns out to be a psychological thriller about loss of memory and the powers of hypnotism.

"Trance" kicks off with Simon (James McAvoy) -- a London auction house security guard -- walking us through the procedures before a robbery. He speaks as if he knows all the ways to prevent the theft of expensive works of art. When Goya's "Witches in the Air" comes to sale, he of course, becomes a inside man. During the robbery, Simon uses a taser on Franck (Vincent Cassel) -- the ring-leader. The belligerent Franck knocks Simon on the head (thinking that Simon is taking the 1798 painting for him). What Frank doesn't know is Simon has already stashed the painting somewhere else. The blow to the head knocks out all memory of where he has stashed the stolen artwork.

Even torture doesn't help jog Simon's memory. So, Franck hires a hypnotherapist, Elizabeth (Rosario Dawson) to crack the subconscious safe. Later, Elizabeth insinuates herself in Franck's gang and she's not so easily fooled and have a few tricks of her own. The hypnotherapy drags Simon and us into a game of multiple betrayals and buried memories.

Boyle breaks the bonds of stylistic control and reins off logic in the hypnosis scenes (just like the child's imaginings in "Millions" or a hiker's delusion in "127 Hours"). He uses those sequences as a canvas on which he can paint. Boyle's vision and Anthony Dod Mantle's hyperactive lens makes everything look good -- from the garbage bags to weather-worn rooftops. Trance was first made as a TV movie by Joe Ahearne in 2001. Joe along with John Hodge has written the script for this 2013 movie. The screenplay has many twists and turns, even though some of them are ludicrously contrived. It reaches a place of ambiguity, where it becomes difficult to guess who's conning who?

Boyle, is at times, trapped with the tricks and omits the human connection which made "28 Days Later", "Slumdog Millionaire" his biggest critical hit. The movie lacks conventionally sympathetic characters and at the end, we don't root for any of the three principal characters. The actors are all up to the task. Cassel plays the menacing character of Franck with finesse. McAvoy is perfect in exhibiting the frustration and confusion of what's going around him. However, the film hinges on the performance of Rosario Dawson. Her character is full of edges the angles -- a little different from the usual passive women she's forced to play.

Like "Inception" and "Fight Club", Trance can't be discussed in detail without giving too much away. The endings are guaranteed to generate lots of conflicting theories (many theories are available on the IMDb) as to who is alive, a doppelganger, dead and sane. At some points, the film resembles "Memento" and "Eternal Sunshine of the Spotless Mind."

Boyle's "Trance" has flaws and shades of callousness, but if you can overlook them, it can remain as a satisfying techno thriller.

Rated R for sexual content, graphic nudity, violence, some grisly images, and language
reins off of logic and breaks the bonds of stylistic restraint - See more at: http://www.slantmagazine.com/film/review/trance/6925#sthash.aHQaT4zY.dpuf
a London art auctioneer
at July 07, 2013
Email ThisBlogThis!Share to TwitterShare to FacebookShare to Pinterest
Labels: British Cinema, Thriller

a very twisty and trippy thriller this is.

Had read Mihir's review of Trance and immediately wanted to watch it.

Your review only makes me want to watch it all the more sooner.