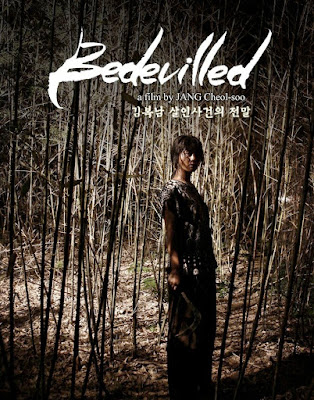 Irish political thinker Edmund Burke said the famous words “The only thing necessary for the triumph of evil is for good men to do nothing”. Korean film-maker Jang Cheol-soo’s hard-hitting drama “Bedevilled” (2010) enacts the hellish reality of those words, showing us the two polar opposite societies, where passivity runs amok. The film particularly touches upon women’s passivity when confronted with ruthless male dominance. Two of the oldest, engaging themes -- betrayal and revenge – form the core, driving element of the narrative, while it also intricately approaches the gender politics. The unbridled abuse and sporadic scenes of bloodbath in “Bedevilled” is definitely not for the faint of heart. Writer Kwang-young Choi and director Jang Cheol-soo’s non-glamorizing, gritty portrayal of the abuse endured by the characters would provoke a stronger response from the viewers. The film in its second-half transforms into a horror movie, jettisoning small traces of melodrama to embrace rage. Rather than make an intellectual critique about the cultural perceptions on gender inequality, “Bedevilled” becomes totally subversive. It is a transition which many may dislike. However, this explosive brutality made sense (to me) or seems like a fitting reaction to the bottled-up passivity of the society.

“Bedevilled” shouldn’t be mistaken as a slasher horror, set in an exotic place. The vengeful attitude and the subsequent bloodshed never give you the much-needed emotional catharsis. It keeps us confused on whether we should root for the central character’s monstrous turn. Unlike the Hollywood movies, it doesn’t camouflage the savagery experienced by the victimized and victimizer. The movie opens with passive people, witnessing a crime near the traffic signal. A gang of tough young men are about to beat-up a girl. The shot is cut to 30 year old Hae-won (Seong-won Ji), a bank employee in Seoul. The pleadings of a poor, old woman at the bank over a loan issue push her to the edge to react angrily. Then with the same abrasive manner, Hae-won drives to police precinct to identify the youths who brutally attacked the girl, previous night. Thinking of staying away from trouble, she doesn’t identity the perpetrators and flees from the station. Back at work, the inherent guilt plus witnessing the beating, makes Hae-won to create another altercation. 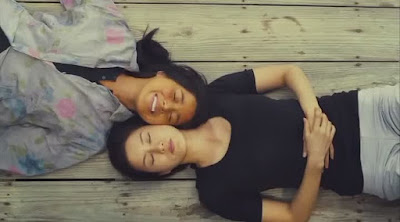 The boss forces Hae-won to take a brief vacation. She returns home. Her neighbor gives the bundle of letters, which she dumps into the bin after just looking at the address. She knows where the letter is from, but doesn’t reply or read it to break the enforced chains of passivity. Nevertheless, Hae-won decides to take up a vacation to her native Moo-doo island. She is returning after 15 years to meet the letter writer Kim Bok-nam (Yeong-hie Seo), a childhood friend of Hae-won. Upon arriving at the island, she discovers that Kim has been suffering horrific abuses in the hands of her husband, brother-in law and their ruthless aunt (at one point , the aunt reminds Kim that ‘a woman is happiest when she has her husband's dick in her mouth’). The rest of the tiny island’s population consists of a bozo-chewing old man and old farming woman. Kim’s finds solace only in caring for her little daughter. She begs Hae-won to at least take her daughter, away from all the island’s monstrosities. Alas, Hae-won is a selfish woman, who thinks that the old grandfather house, Exotic Island and Kim’s devotion (or worshiping) would purge her defective emotions. When she comes across the endless cycle of abuse, Hae-won simply embraces the same passivity and harshness, she demonstrated in Seoul. Gradually, Kim Bok-nam reaches to a breaking point after experiencing a great loss and betrayal. 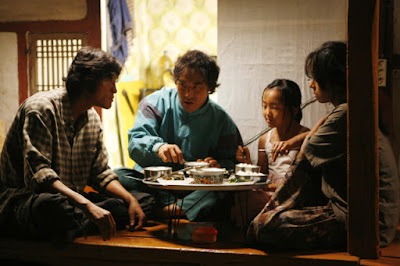 The build-up of atmosphere and mood is almost flawless from director Jang. He unfurls majority of appalling events, set in the island, in broad day light. In that brightness, the ferocious male dominance seems more intense. “Bedevilled” is definitely not subtle. It manipulates our emotions to constantly boil over with rage (of course for the same reason many may turn off the film with disinterest).  The sense of total defeat exhibited by Kim Bok-nam makes us hope for reversal of situations. The brutality stacks up higher in the narrative that islanders seem crazier than merely dysfunctional. The frames also keeps on lingering on the abuses that we are pushed to the same emotionally numb state of Kim. At times, the proceedings are unnecessarily brutal. The mere disclosure of the family head’s incestuous behavior sends shocking waves within us, but the camera lingers over as the father’s hand rests on the little girl’s pelvis to keep on jabbing at the dreadful feeling. Apart from those visual overloads, director Jang effectively brings out the multi-layered, complex nature of Kim’s plight. 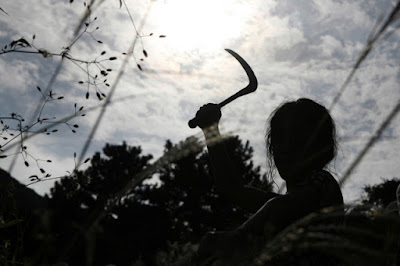 Writer Kwang-young Choi clearly places the blame on islanders. But the ingenuity lies in the way he has created Hae-won against whom we channel all our anger. We find ourselves easily rooting for Kim’s survival or aggression, but at the end we are also able to identify ourselves in Hae-won. Her yearning to break away from the apathy and acceptance of cruelty makes us wonder how different would we have reacted in such a situation. It is such layers that transcend it from being a typical revenge/slasher flick. The inevitable outburst of Kim and the transition to horror territory is effectively made. The transformation scene was staged brilliantly. Kim stands still in the field gazing at the bright sun, after working herself to the point of exhaustion. The luminous shot ironically points at the turn towards darkness and the change is confirmed when she announces that the sun spoke to her. The mad aggression in the end remains more than a mere payoff sequences. The throat-slitting homicidal rampage is showcased with an omnipresent brutality and so not played for kicks as in typical slasher flicks. There’s a clear symbolism in the manner Kim uses sickle and all the tools of servitude to fulfill her vengeance. Director Jang riddles the narrative with such overt symbolism, but the most gorgeous one is the final ‘dissolve’: sad Hae-won lies down on the apartment floor and it slowly transitions to an island, in the shape of woman, lying down. Hae-won’s final gesture may be considered as shot at redemption and hope. But, the very last ‘dissolve’ how the ‘island’ will always be a part of her (I also feel that death would be a very easy way out for Hae-won’s sins). Or may be on a grander scale, that particular shot is a metaphor for our isolated society; selfish and indifferent forever. To say that, Yeong-hie Seo gives a hard-hitting performance would be an understatement. First of all, she is immensely brave to play such an emotionally draining character (the script didn’t get made because many Korean actresses rejected the role of Kim). Her smiling demeanor, in the face of unspeakable abuses and bizarre attempts to shut out the horrific realities around her was gut-wrenching to watch.

“Bedevilled” (115 minutes) is one of the most unnerving and emotionally distressing Korean feature-film. It finely juxtaposes the polarizing elements: layered profundity and brutal slashing; strikingly beautiful scenery and darkest crevices of the society.