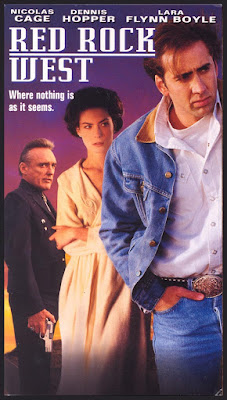 John Dahl’s “Red Rock West” (1993) is the kind of film that would put the movie buffs of old noir movies in a joyous mood. It has thrilling developments, delicious twists and bears solid comparisons to the passionate works of Coen Brothers and David Lynch. Critic Roger Ebert had declared ‘Red Rock West’ as ‘the kind of movie made by people who love movies, have had some good times at them, and want to celebrate the very texture of old genres like the western and the film noir’. I can’t say better than that. Watching it 23 years after its initial release, I must say that some of its twists and loops are predictable (since many similar neo-noir has lessened the plot’s intricacies). The film is neither a classic of neo-noir sub-genre nor it masterfully transcends the Western and Noir genre. It just tightly hangs in there between genres, infusing a good deal of dark humor and keeps us entertained from the first to last frames.

The pleasure of watching “Red Rock West” lies in watching it without reading any plot details (including this one). It is only when you are kept in the dark or unsure about what’s going to happen next you can enjoy this film to the fullest. Another pleasure the narrative bestows us is the way the characters are laced with a fine dose of ambiguity. We might be sure that we have figured out who is who or what, but then there are always little surprises in the character decisions. Apart from the shrewd plot developments, the ingenuity lies in the handling of inherent implausibility. Everything in the narrative has some unbelievable coincidence. However, this improbable nature works in favor, tuning up the intensity and making the situations more labyrinthine. “Red Rock West” opens on the road, cutting through the middle of Western desert. Inside a car, on the side of road, sits our honest and vulnerable drifter protagonist Michael (Nicholas Cage). He’s been recently discharged from the ‘Marines’ and has driven 1,200 miles, taking on a friend’s word to do oil rig job, near Wyoming. 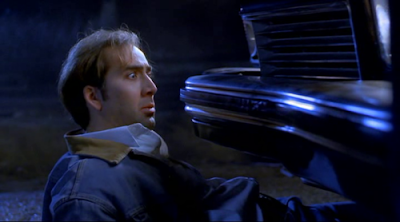 Michael doesn’t get the oil rig job because he honestly tells the employer about his bad knee. He just has $5 to fill the almost empty fuel tank and the man at gas station points him to nearby ‘Red Rock West’ to try for hard labor. Considering the permanent leg injury and unsure economic as well as emotional position, Michael drives to the little town’s bar. To his surprise, he is warmly welcomed by the bar owner Wayne (J.T. Walsh). Michael doesn’t know Wayne has welcomed him after seeing the Texas plates in his car. But, when Wayne mentions about a job and calls Michael as ‘Lyle from Dallas’, Michael withholds no dilemma about impersonating a person to take the job. Alas, as it turns out that the job involves murder and the reward is $5,000. Wayne orders the false Lyle to kill his wife. Michael takes the money, goes on to spy Wayne’s beautiful, young wife Suzanne (Lara Flynn Boyle), who is having a secret rendezvous with a rugged, ranch hand in a trailer.

Michael explains to Suzanne about her husband’s plan. The enraged woman doubles the offer to kill Wayne. He takes her money too and before leaving the town, Michael does the right thing: writes a letter to local sheriff about the wealthy couples’ mutual murder plans. That’s not the only right thing, Michael does. While driving out of town, he hits a man wandering in the middle of road and immediately takes him back to the town’s hospital. Men from the sheriff department arrive to the hospital and later come the sheriff himself. From then on, things get a shade darker for Michael. Let’s also not forget the crazy quotient: the real Texan hit-man Lyle (Dennis Hopper). A lot of trust issues arise and characters react to that in different ways. 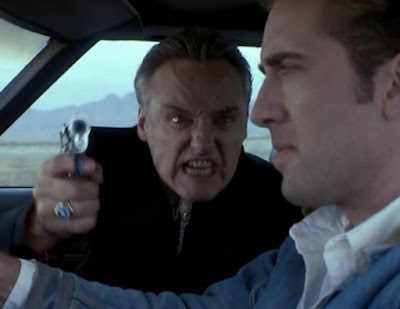 Like a perfect film noir hero, Nicholas Cage’s Michael always remains (except at the end) one step behind the situation (just like the viewers). He could be accused of naivety for getting caught under femme fatale web. But, then the traumatized emotional state of Michael is evoked to insist upon his confusion over receiving unexpected affection from a beautiful woman. Despite a bad knee, Michael stands straight and fights for his survival. Nevertheless, from an emotional perspective he always falls into things. A vital element for noir hero is his simple conscience. A conscience, which bends few rules, hatches simple solution for complex problems.  It all makes our noir hero a lot unsure about things than at the beginning. Finally, when every pieces of the puzzle fits in, the hero wakes up from uncertainty to wrestle with evil. The physical and mental disability of Michael also reminisces us of the Hitchockian protagonists (for eg, “Rear Window”, “North by Northwest”, etc). The aforementioned narrative trajectory is strictly followed in “Red Rock West”, but its vital strength is the skilfully developed suspense and atmosphere of doubt. The worldview of the other characters in the film is very basic: like staying ahead of others. Within that basic character nature, John Dahl (and his brother/co-writer Rick Dahl) diffuses some good secrets. Wayne and Lyle are more complex than their staple unnerving, ruthless natures. From one sequence to next, they react in multitude of ways.

John Dahl marvelously moves it like a comedy of errors. The script boasts many tongue-in cheek dialogue deliveries The color schemes, the recurring shots of ‘Welcome’ and ‘You are leaving’ town signs, sharp editing, gorgeous scenery of the west, and a good soundtrack reminds us of the era’s David Lynch movies. Oliver Stone’s 1997 film “U Turn” (with Sean Penn, Nick Nolte, and Jennifer Lopez) had a very similar plot and also flew under the radar like Dahl’s. I felt “U-Turn” was visually over-loaded and offered a less engaging experience than the adept directorial method of Dahl. After “Red Rock West”, director Dahl made one good movie “The Last Seduction”, and then moved on to direct acclaimed TV series episodes (from “Breaking Bad” to “Hannibal”). The performances are solid throughout. It is good to see a subdued Cage and a smiling Hopper as killer with one or two screw loose.

“Red Rock West” (98 minutes) is one of the underrated neo-noir/thriller that pays fine tribute to hard-boiled thrillers of 1940’s to the gritty works of Lynch and Coen brothers. It’s progressively complex character motivations never wanes our sense of electrifying fun.