The Wailing [2016] – A Spellbinding Descent into Disorder 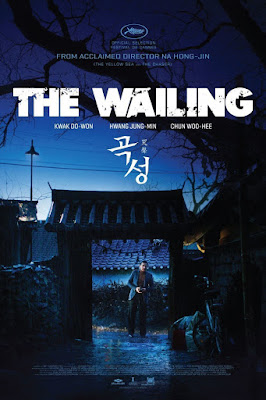 I like the way how South Korean movies mix together genres to showcase the overthrowing of a fragile order by the nightmarish chaos. My most favorite thriller of the Korean New Wave is Bong Joon-Ho’s “Memories of Murder”, where in its initial scene you see the footprints of an impending chaotic disorder (badly mutilated corpse hidden inside a small irrigation tunnel, next to an agricultural field). Gradually this initial disorder expands in the landscape as well as in the characters’ mindscape to restore an ultimate emptiness. In “Memories of Murder” we often see visuals where the central characters are pinned against the canvas of disarrayed surroundings (for example, think of that scene when the lead detective looks for a vital piece of paper standing above mounds of garbage, or the great final tunnel scene). Chaos not only upends an order to test the protagonist’s courage; chaos actually tastes a victory in such layered South Korean feature films. Director Na Hong-jin, like his counterparts Bong Joon-ho, Kim Jee-woon, Park Chan-wook, is intrigued in designing the petrified, perplexing journey of a central character in a perturbed world. While his previous two acclaimed noirish thrillers “The Chaser” (2008) and “The Yellow Sea” (2010) dealt with a chaotic situation, instilled by apprehensible human blunders, the new sensational horror “The Wailing” (aka ‘Goksung’, 2016) terrifies us by an ambiguous, supernatural chaos.

The intense, multiple-genre cook-up in “The Wailing” created a sensation in this year’s Cannes Film Festival and lead the film to become a big box-office hit in its country. There’s the trademark Korean dark humor, unexpected gore, profound contemplation on the nature of fear and sin, references to folklore, eastern philosophy, and bible. In “The Wailing”, Na Hong-jin walks through the elements and themes with an elegance of a tightrope walker that we are not only thoroughly entertained within the 156 minute running time, but also its reach extends beyond the running time to make us ruminate upon human behavior, in the face of all-consuming threats. The film would definitely diffuses a feeling of having watched an incoherent narrative. The uncertainty in the tremendously tense final act of the film leads to painful questions and forces us to fish through our cognitive abilities. Yes it is one of the rare supernatural horror/thriller, in which you can’t afford to turn off your mind to feel the dread; in fact the more you contemplate about the unexplained horror in “The Wailing”, the more terrifying your movie experience will be.  Of course, those who see that perfectly calibrated uncertainty as stupid or maddening would end up having a frustrating experience. Even if an open-minded viewer couldn’t grasp everything happening in the film, he/she could solely appreciate it for the crazy, visceral thrill ride. 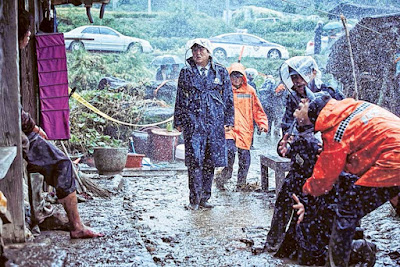 Unlike the great American supernatural thrillers, “The Wailing” doesn’t consist of a single tone to cue in the viewers to react in predefined ways. Like the unpredictable chaos that descends upon protagonist, we are left uncertain on how we should react or take in the visual compositions. Therein I felt that the metamorphosis of this invigorating genre-blender commences. The movie opens with a shot of a strange, old man hooking up fish bait. Since the stranger is a Japanese man, the question among the suspecting small-town Korean villagers is whether he is only baiting for fish or human souls. The Korean title ‘Goksung’ is the name of village, where a disturbing crime has been done. Two people are stabbed to death in a brutal manner as the perpetrator (fellow family member), sits outside the house in a trance, his body entirely covered with boils. The protagonist is a police sergeant named Jeon Jong-goo (Kwak Do-won). He lives with his wife, mother-in law and an impertinent 10 year old daughter Hyo-jin (Kim Hwan-hee). Jong-goo, on the insistence of his family members, slowly takes his breakfast before heading to the brutal crime scene, made more chaotic by the heavy rainfall and muddy landscape. The inept, idiocy of the protagonist brings to mind the futile investigation methods of Song Kang-ho’s Detective Park in “Memories of Murder”. The out-of-shape Jong-goo is not good at securing the crime scene, let alone investigating about it (he constantly uses family as an excuse for turning up late at work). Although he seems to be in the periphery of investigation, the gruesome murders set off his nightmares. Few days later, another family is murdered and the killer acts as if possessed by a demon. 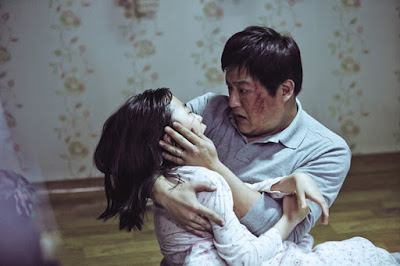 A fellow cop talks to Jong-goo about the rumor circulating in the village about a mysterious Japanese guy (Jun Kunimura), who has taken a cabin deep in the woods. The old Japanese guy is suspected of a being either a serial killer or a demon. Jong-goo only grunts at this idea (or rumor) and berates upon the fellow cop. A string of nightmares and bizarre real-life experience slowly pushes Jong-goo to investigate upon the strange foreign guy. By this time, his smart preteen daughter Hyo-jin starts acting in a weird manner (the weirdness which afflicted other murdered/murdering villagers). The mother-in law fears that it might be a demonic possession and that they need to contact a famous shaman (Hwang Jung-min). The time for shedding the goofy, every-man antics arrive for Jong-goo and since his familial harmony is threatened he desperately turns to be a reluctant hero. Before agreeing to shaman’s idea to perform a death hex on the foreign demon, Jong-goo boldly goes to investigate the Japanese man’s cabin (taking alongside his cop friend and a young translator). Terrifying developments continue to happen and the basic fear, desperation to fend off the evil actually leads to incertitude and total chaos. Director/writer Na Hong-jin cranks up the sense of dread and tension in the final act to unbearable levels. Up to that point, “The Wailing” was eerie and thrilling, but towards that riveting final act, it becomes bone-chilling scary. 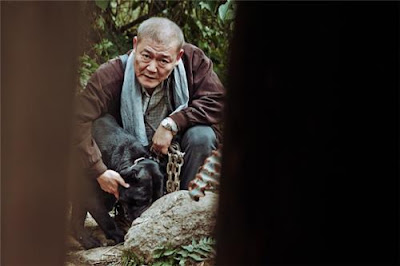 Korean film-makers are adept in constructing the uneventful, banal life events of the characters. We could something concrete or common in the way Jong-goo reacts to horror or tragedy. He doesn’t act in a manner to extract single emotion; he’s awkward like us that we both laugh at him as well as feel for him. Jong-goo doesn’t act as the cinematic guy whom we hope to see. He is just full of unpredictable emotions like all of us. There’s no one way to react to fear or tragedy. Sometimes we may remain insensitive, yet in other times we might be fully engulfed by panic. The callous attitude of the protagonist doesn’t vanish in the initial series of murders, since the gruesome crimes don’t threaten his quotidian life. The agony and dread sets off a bizarre chain of emotions only after Jong-goo discovers how he could be just another pawn in the deadly game played by supernatural force. The transformation from casualness to fury and poignant plaintiveness is not only relatable, but also works in favor of the movie’s general unanticipated volatile nature. Director/writer Na Hong-jin deliberately paints the characters with an innocent and monstrous side that we aren’t able to figure out who is who. For example, Kunimura’s stranger character lacks fixed expressions that he could pass off as savior as well as the devil. The same goes for shaman and the white-clad village spirit. In one stand-off sequence, Jong-goo confronts a scary dog and kills it brutally. The ferociousness, sorrow and dark humor flows through that small sequence, making us wonder about his character nature.


Majority of the terrifying set-pieces are cloaked in ambiguity. We don’t know when reality ends up and when nightmare starts off in one early scene. In the elaborate ritual performance of the shaman, we aren’t sure who is performing a death hex on whom. Eventually, in the thunderous final sequence, we are kept in the dark about who is telling the truth. Even when the truth comes to light, we are left with unanswered, nightmarish questions. There are some brilliant references to bible (as the opening bible verse state about the doubts Jesus’ disciples after his resurrection), eastern occult practices and other western religious symbolism. These elements are mixed together and co-exist to interpret upon the meandering madness, although we never latch onto a precise answer.  The narrative sort of becomes a chicken-egg scenario. Is the old guy responsible for this malevolent, hidden fear? Or is it the fear that strengthens the malice of the old guy? What is the right decision which might have changed Jong-goo’s and his family’s fate? Did Jong-goo any choice at all to make the right decision? Of course, Na Hong-jin’s narrative doesn’t help us find a path through the cluttered ambiguity; he simply wants us direct our thoughts to the movie’s painful central themes of invisible fear and human perception. We gaze at different, inexplicable situations of madness in the climax (the cross-cutting of conversations incites a spine-tingling effect) that we really don’t know what is the absolute truth (you see, it’s all in the perception). Is Xenophobia a vital theme? Is it about people letting the fear of ‘others’ ('foreign devils') getting better of them? I can’t say for sure. For the most part, the director is interested in the spiritual spaces that we don’t know whether he is inclined to make a sociopolitical statement. 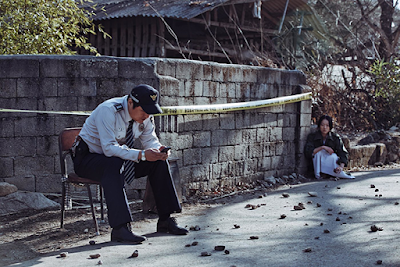 As I mentioned before, the tonal changes are flawlessly handled. The thriller and supernatural elements mutually elevates the narrative’s general descent into desolation. The ongoing devastation in the village (both economic and spiritual) is referred through richly detailed imagery (cinematographer Hong Kyung-pyo). The unkempt local stores, dried-up herbs, long shot of a woman hanging up in a tree, etc keeps on suggesting of the impending invasion of bleakness. The writing loops and thematic weight doesn’t drag down the visual thrill in feeling the whirlwind of nightmares. Do Wan Kwak as Jong-goo gradually draws us to feel his desperation. While the initial mixture of pathos and humor allows the viewer to relate with Jong-goo, the later dark touche to his character stays true to the story’s controlled mad leaps. The presence of Kunimura Jun and Chun Woo-hee (was wonderful in “Han Gong-Ju") as the two polarizing supernatural figures leaves a deep impression on us.

“The Wailing” aka “Goksung” (156 minutes) is a provocative, hypnotic and path-breaking horror thriller which goes for a pervading atmosphere of chaos than conjuring up cheap scares. Rarely, I have come across a genre cinema that deals with the elemental sort of doubt and fear in such an intricate manner.