All the Way [2016] – Blistering Politics Behind Closed Doors 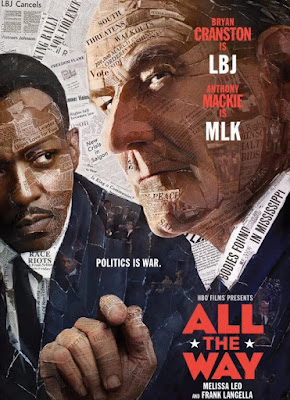 Bryan Cranston plays Lyndon Baines Johnson (LBJ), the 36th President of United States -- in Jay Roach’s adaptation of Robert Schenkkan’s play “All the Way” (Cranston played LBJ in the stage too for which he won a Tony Award) -- with a verve that’s more than a brilliant imitation of the man. He takes us beneath the commanding stance of the President, seen in old TV news clips to embody the heavily weighing private hours. We see those deepening furrows as people see LBJ as ‘accidental president’ after the assassination of John F. Kennedy (in November 1963). We see his crafty side as he plays the political game with Southern politicians, while also navigating the Civil Rights Bill. We see the President’s impatience, rants, vulgarity, unbridled charisma, and firm nature. Cranston wears a perfect prosthetic, giving him the bushy, thick eyebrows, reducing hairline, and sharp nose, but what stands out in his performance as Lyndon B Johnson is the manner with which he adds meat (without being flaccid) to the bones of made-up LBJ figure. This performance is what makes “All the Way” (2016) an important & must-watch political drama, but on a little lamentable note, I must say that only Cranston’s presence makes it a memorable movie.  The other vital characters of the period lacks the shades or facets imbued on LBJ (Hoover’s obsession over Martin Luther King Jr. is the only pithy aspect) and despite a speedy narrative, none of the dramatization of the real events is dealt with a profundity.

Jay Roach's “All the Way” is not a traditional biopic of LBJ, but more a study of American politics in the 1960s. On one hand, it reiterates the historical perspective by showing us the President, who doesn’t give a damn expect for the passing of Civil Rights bill; a President who doesn’t want to fine-tune American South population’s prejudice and he wants to bring South out of its scarred past. On the other hand, Jay Roach and Robert Schenkkan takes us behind the close doors to exhibit the conniving and threatening things the men in power performs to realize their grandiose public declarations. ‘Politics is war’ declares & believes LBJ, who is as recalcitrant as a freedom fighter and also engages in cajolery like a salesman. Some of the conversations (based on what’s said to be real transcripts) are so raw, arcane and racist that we get the slice-of-real-politics. It is well known that how Civil Rights Act of 1964 is a watershed moment in American race relations, but the drama surrounding the Act also suggests how the American political arena was gradually shifting into a more cunning phase. However, despite such scattered nuances, it is the stagey limitations of the narrative that halts it from being diffused with more depth. The film definitely works as a brief, shrewd history lesson for the uninitiated, while others may feel something is lacking in its presentation. 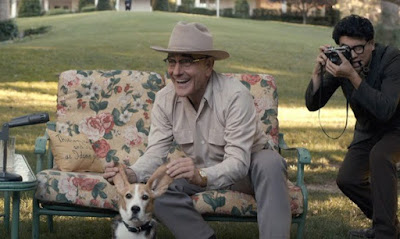 An emotionally resonant tone is set in the opening scene as the camera ambles past JFK’s blood soaked backseat of the limousine, sad faces in the hospital corridor to rest on a small room, occupied by weary Lyndon Johnson and his wife Lady Bird (Melissa Leo). The next few scenes convey how LBJ didn’t want to be perceived as ‘accidental president’ and was so dedicated to dismiss any such description by immediately announcing the Kennedy’s Civil Rights Bill. Writer Schenkken tidily punctuates each phase of Lyndon’s political journey between November 1963 and November 1964 through a confidential voice-over [“It’s only a matter of time before they haul me up into the light where their knives gleam” says LBJ], giving us a bearing of what kind of a man he is and where does he come from. Schenkken’s LBJ is neither a cynical politician nor a heroic as history book teaches us. The use of some of the very crude sexist remarks by LBJ to coax an ideal historical figure like Martin Luther King Jr. humorously notes on how political compromises are attained through ribald talks than well-meaning nudges.


Like “Lincoln” the main story-line concerns the procedural, which makes President Johnson to lock horns with his mentor Senator Richard Russell (Frank Langella) – whom he calls Uncle Dick (Senator Russell previously defeated the passing of Civil Rights Bill when President Harry Truman made an attempt). Johnson, the southern man, is well aware that the passing of the bill will make Southern Democrats to bolt away from him in the 1964 Presidential elections. Johnson wants the African-American votes and also knows that the passing of the bill is the ‘right thing’ to do. Mr. King knows Johnson could only deliver the bill as his Republican Party opposer Senator Barry Goldwater is not a supporter of civil rights. What follow is Johnson’s stern, calculative political strategies to win over the volatile situation and rein in the polarized Congress. Nevertheless, the overview of political power scattered in the film brings to mind the more intricate present political structure (and Mr. Goldwater’s campaign proclamations could be related with Mr. Donald Trump’s). 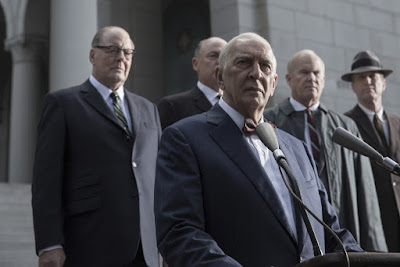 There isn’t much juicy material for the other historical characters involved in the narrative, even though the actors transcend the limited room given to them. Anthony Mackie and Melissa Leo turns out a dignified performance, while the impeccable acting comes from Langella as Russell and Stephen Root as J. Edgar Hoover. The way Russell decries on Civil Rights bill while a black man shines on his shoes and the manner with which Hoover showcases his hypocrisy through the loathsome investigation of Martin Luther King makes up for the fascinating parts of the narrative, which otherwise reiterates history through a shallow perspective. The vital problem for me is the small time allocated to the arguments presented in Congress against and for the Civil Rights Act. The 1964 Democratic National Convention is also pieced only through archival footage. As I mentioned earlier, what transcends the limited quality one could expect from TV movie based on a stage play is Cranston’s steely presence. As he did in Jay Roach’s previous venture “Trumbo”, the renowned on-screen Meth-King once again makes a nuanced interior journey.

“All the Way” (132 minutes) deserves praise for zeroing-in on some of the still at-large disquiet in the American political stage. The generalist overview makes the film less emotionally involving, although Bryan Cranston as LBJ is superb throughout.

at October 26, 2016
Email ThisBlogThis!Share to TwitterShare to FacebookShare to Pinterest
Labels: 2016 Movies, Based on True Story