My Discontent with the Tamil Film “Uriyadi” 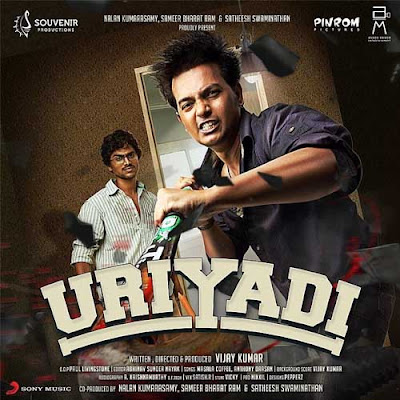 The making of Tamil independent film “Uriyadi” incites inspiration among young aspiring Tamil film-makers. The rise of Vijay Kumar, from IT employee to a film-maker says a lot about reliving one’s dreams. There’s a quite a good amount of commendable factor in Vijay Kumar’s debut feature “Uriyadi”. Although like many of the young Tamil film-makers the director has selected ‘college’ as the primary setting, he has actually tried to deal with a volatile subject. There are no heavy commericalization: like forced romance and bland comedy tracks. Some may call the acting a bit ‘amateurish’, but that doesn’t affect the feel of the movie. The four college students in the tale have a realistic character sketch. They are just like many other Indian Engineering college students, on the verge of graduation, without a single idea about their future. “Uriyadi” didn’t attain a big commercial success, although it was unanimously hailed by critics, cine personalities and viewers who missed it in the week-long run in theaters.

Some critics called it a ‘landmark work of the Tamil independent cinema’ (Mr. Baradwaj Rangan of Hindu hailed it as ‘gritty little film by a solid film-maker’), while few others thought of it as ‘bold cinema’. In twitter, many stated that the film reminded them of SasiKumar’s excellent ‘Subramaniapuram’ (2008). The ‘bold’ here means that the narrative lays plain the sleazy activities of local caste-based political bigshots. “Uriyadi” is set in the late 1990’s (when Vijay Kumar went to college), but the caste tension surrounding few colleges in the South Tamil Nadu region reminds us of the small newspaper articles we still come across. The similarity of small town politics, violence, debut feature, and four youngsters may have made some to compare it with ‘Subramaniapuram’. But let’s not insult Sasi Kumar that way, however poorer a film-maker he has become now. At its best [and if you can digest onslaught of violence], “Uriyadi” is a fairly watchable movie. And as usual, it is being applauded for all the wrong reasons.

It’s as if the story behind the movie’s making and the subject it tries to explore itself makes the movie an excellent one. Many of the audiences who decried at those who didn’t like Ranjith’s “Kabali” said that ‘people didn’t get or don’t want to get the references to caste-based oppression & conflicts’. From a cinematic viewpoint, Ranjith has failed with “Kabali”. He might have great references to real life incidents or oppressions, but they are just that: ‘references’. References and verbally uttered messages won’t transcend a poorly crafted cinema. With “Uriyadi” the problem is not the direction or acting. The problem is how the film gets overly applauded because it deals with something related to caste-conflict. There’s no question of how effectively the film uses this conflict and what kind of profound statement the film-maker makes on this conflict. The message we derive from “Uriyadi” or the denouement offered in the film is shocking and disgusting. 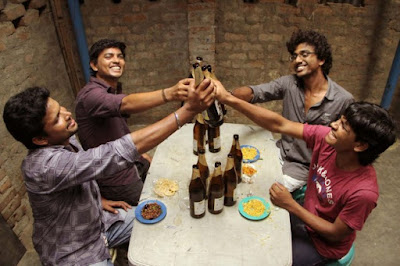 “Uriyadi” tracks down degenerated behavior by the local bigwigs (involved in everything from liquor shops to prostitution), who are also embroiled in caste-based politics. The schemes surrounding the placement of a caste leader statue near the college campus and the ensuing drama are realistic and very much a burning problem, plaguing south Tamil Nadu. These local bigwigs’ reign comes to an end. How? By the increasingly degenerate behavior of the film’s four central characters – the final year engineering college students. As the narrative progresses towards the very bloody climax, the students comes a full circle, from being a careless, frolicky youngsters to heinous criminals. The moral compass of the narrative wavers so much that it vanishes out of this film. From a cinematic standpoint (unlike “Kabali”) “Uriyadi” seems solid. Mr. Baradwaj Rangan comments on how the furnace introduced earlier in a scene during the practical class (for engineering students) is re-purposed in a surprising way. There are many cinematically well-done surprises (and very good detailing too). But, the moral behavior is unbelievably erratic.


What does “Uriyadi” try to say? To be-head all these corrupted individuals, causing conflicts, in the name of caste? Looking at the activities of these sick caste-inflicted people, it seems to be the good solution. But we can’t actually condone youngsters involved in brutally killing the bad seeds of our society, can we? Even Bharathiyar (the great poet’s song is repeatedly played in the violent sequences) didn’t pen the righteous-fury inciting song to make youngsters carry a sickle for slashing the throat of ‘bad men’. Although the youngsters at the center of “Uriyadi” aren’t showcased like the regular ‘hero’ of Tamil cinema, through their violent activities they are gradually elevated to be the heroes. I have no problem with watching on-screen violence if it is justified. In a hard-hitting film like “Visaranai”, you need to feel the brunt of a police baton to feel the pain of the sufferers. But, here nothing in the character sketch tells that the youngsters are capable of committing such appalling murders. They don’t even have radical political ideologies to feel that they should kill without remorse or regret. In fact, they are apolitical, totally irresponsible and have their own, struggling family members. Even from a revenge perspective, the killings are done in a very meticulous manner like the ones did by paid-killers. In the end, we don’t get any profound solution or at least an observation of this unnerving rural caste-conflict.

Let’s hope that the Tamil independent film-making efforts flourishes in the next decade or so. But, let’s not promote “Uriyadi” for what it is not – ‘a solid political thriller’. In that respective, Mr. Gautaman Bhaskaran of ‘Hindustan Times’ is the only critic who got it right, “Uriyadi is a social debase story on caste-based conflict”. I agree to that.