Under the Shadow [2016] – A Terrorizing Spirit Intensifies Maternal Anxiety 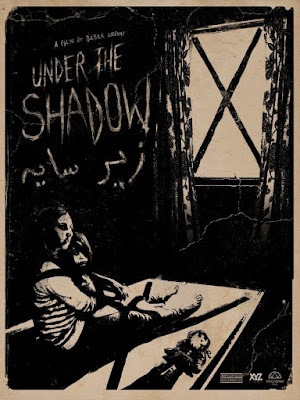 I feel a horror film is more terrifying when it relies on the characters’ existential angst and the relevant societal upheaval. The web of paranoia and anxiety instilled in “Rosemary’s Baby” to modern horror movies like “The Devil’s Backbone”, “The Babadook”, “It Follows”, “The Witch”, has a profound social and personal context. It’s not that these films don’t rely on dreadful supernatural elements or jump scares, but the traditional scares are coated with an ambiguity so that we can peel off the surface to look at the realistic, relatable horrors. Whenever a horror movie mixes a ghost-like element without losing sight of the basic human or social reality, it gains both metaphorical as well as a moral force. London-based film-maker Babak Anvari’s Farsi language feature-film debut “Under the Shadow” (2016) draws terror from its protagonist’s stressed psyche and faltering societal values. You can perceive the monster seen in this film as some imagined creature of netherworld or in a larger sense you can contemplate it as an ugly truth about society. It stays smart, intriguing and entertaining, no matter what your choice of interpretation is.

Director Anvari taps into his childhood memories for the narrative’s setting during the Iran-Iaq war. The film opens in 1988, close to a decade since Ayatollah Khomeini’s Islamic revolution and Tehran is in the firing line of Saddam Hussein’s missiles. Women are suffering under the strict social codes placed by the Iranian government and the political upheaval is threatening to suffocate the little freedom they enjoy. Our protagonist Shideh (Narges Rashidi) was a once-promising medical student who in the revolution days associated herself with left-wing activity. The medical college rejects her application to continue the studies, citing the radical past. By becoming a doctor, she wants to fulfill her mother’s dream who had recently passed away. Shideh has a smart doctor husband Iraj (Bobby Naderi) and a precocious little daughter Dorsa (Avin Manshadi). The events happening in Shideh’s life is slowly pushing her into chaos and despair. Air raid sirens constantly go off in the middle of the night, Iraj is drafted off to the battlefront, Shideh’s relationship with daughter Dorsa starts to fracture and Dorsa has imaginary conversations. Surrounding the bigger chaos in her life is the smaller, casual oppression she faces day-to-day: the landlord disapproves of women driving a car and Shideh hides the VCR (& Jane Fonda workout tape) since it will be seized by the authorities. An evil spirit’s arrival into Shideh’s house is as frightening as the morality police’s threat to inflict harsh punishment on women not wearing a hijab.

On paper, “Under the Shadow” might seem a bit derivative. As in traditional horror movies, the familiar folklore creature ‘Djinn’ haunts people at home (first through nightmares) by stealing their favorite objects. When Iraj goes to the battlefront he advises Shideh to go to his parents’ house as the big cities like Tehran are vital targets for Iraq’s missiles. Shideh stubbornly refuses, repeatedly assuring him that she can take for of their daughter. That’s when Dorsa favorite, cute doll Kimia goes missing. Dorsa claims, after believing in the tales of a traumatized, refugee boy Mehdi, that a malevolent spirit has taken her doll. Shideh’s neighbors also fearfully talks about the evil spirit, although she disapproves it as a superstition. As the friendly neighbors flee the apartment, Shideh’s thoughts are strained. The inability to gain Dorsa’s trust and the failure to save a neighbor’s life brings a calamitous blow on her desired identities of mother and doctor. Out of the corner of her eye, Shideh starts to see something sinister. We are pulled into the spine-chilling threats inflicted by supernatural creature, yet the character’s psychological uncertainty gives us the distance to be an observer.  Corporeal or non-corporeal, the alleged menace is pulling Shideh and Dorsa into a chasm.

The staging of horror scenes takes references from benchmark horror cinema like “Rosemary’s Baby”, “Don’t Look Now”, “Poltergeist”, and “Halloween” to J-horror features like “Ring”, “Dark Water”. Nevertheless, the references and jump scares doesn’t seem tiring since the strong characterization creates a palpable sense of fear. “Under the Shadow” has an unfamiliar, distinct setting but that doesn’t mean that there’s 360-degree turn from predictable horror conventions. A mute boy whispering ‘secrets’ to the central child character, the missing of beloved doll, the delirious fever and very near psychologizing are the oft-repeated horror movie conventions. But, director Anvari slowly imparts the tension by juxtaposing the social and political turmoil into the events to gather much-needed complexity. Even if the scary elements are familiar, the singular core idea connects us to the Shideh’s anxiety. As in Guillermo del Toro’s metaphorical horror film “The Devil’s Backbone” (2001), the primal spirit arrives alongside the realities of war. The unexploded war head perched on the flat above Shideh’s which brings wide cracks her ceiling only suggests the emotional explosions waiting to happen. It is a very appropriate and efficient manner to introduce the horror element. If the Sharia Law and the Iraq war is a catalyst or a shadow, then the personal insecurities, fears and distrust become the ‘djinn’ lurking in that shadow.


Director/write Babak Anvari has seamlessly blended the political context with scary-film stuffs. He doesn’t shortchange the pure pleasures of horror genre for psychological explanations. The little cultural insights provoke us to make the psychological & political connection to the supernatural threat. The fate of Shideh’s prized Jane Fonda tape, the little cracks in the glass where the wind enters to infect the sanctity of the apartment could be perceived as a symbolism for oppressive authority. At some vital scenes, the political context is very specific. The minute the policeman sees Shideh (clutching Dorsa) on the streets running away from ‘djinn’, he is annoyed at the woman not wearing a head-cover rather than fearing for her safety. The detached look Shideh gives as she is let off with a strict warning (the usual punishment is whipping) conveys the feeling that under an uncooperative authority, women are left alone. The ‘djinn’ accentuates the fear of being a mother (with a desire to be independent) in a fractured society. Look at the evil spirit taking the form of a big, white bed-sheet with eye holes which tries to swallow the mother and daughter. Is it encircling them from attaining independence? But as I said, even if you don’t make these overt connections, you can just enjoy it as a well-told horror tale.


Anvari and his DP Kit Fraser have constructed some brilliant oft-kilter angels to signal Shideh’s descent into madness.  There’s the blurred, half-asleep, creepy point-of-view shot as Shideh catches the lurking spirit from the corner of her eye in the doorway. Although there are only four or five distinct spaces, the visuals become increasingly claustrophobic, perfectly reflecting the characters’ experience of the phenomena. Rashidi gives a flawless performance as Shideh, tracking down her characters’ slide from assertiveness to despair. The way she speaks the dialogues reflects the internalized frustration of Shideh. The child actor Avin (in her first role) looks convincingly terrified without ever annoying us.

“Under the Shadow” (84 minutes) is one of the quality horror movies of the year. Despite sticking to some of the genre rules, the unusual backdrop plus the impactful social commentary immerses us in the fearful atmosphere. Even those who are not into scary flicks can give this one a try.

There are a very few horror movies that I like. Most western horror movies bring back someone from the grave. Indian movies are even more ridiculously funny. I really felt chill when i saw Exorcist and Conjuring. There was a Japanese movie, I forgot the name, may be Haunted House that was really scary. Even Silence of the Lambs, though not exactly a horror movie, was scary. The art is not what one shows, but what one does not show yet gives a glimpse of what could have been.