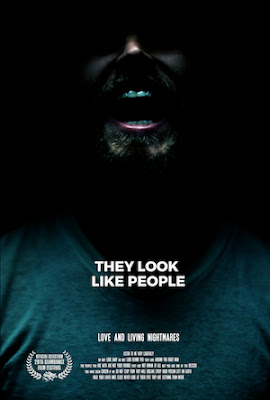 New York based independent film-maker Perry Blackshear’s micro-budget psychological horror/thriller “They Look Like People” (2015) could be best experienced without being well-aware of the plot. Like recent small-budget horror movies “Absentia” and “Babadook”, Blackshear combines character-driven drama with few genre elements. So, if you are interested in watching a man’s extreme psychological experience (that’s devoid of blood lust) and don’t want to hear more details, just go in blind. And, within a short span of time, I had come across two debut feature films – “Krisha” & “Kaili Blues” -- from aspiring film-makers, who took over technical jobs and involved their friends & family in the production. Similarly, in “They Look Like People”, Blackshear takes over the cinematography, editing, and sound design jobs along with writing & direction. He booked a ticket for his LA-based actor friends to come to New York and prepared a script, derived from the difficult, personal experiences of some of his friends. Evan Dumouchel and Macleod Andrews who play the central characters also share ‘co-producer’ credits.

Director Blackshear cites Jeff Nichols’ “Take Shelter” as his inspiration to make this film. Jeff Nichols’ film dealt with the story of a family man who thinks that an apocalyptic storm is coming. He gives into his schizophrenic visions to starts building a bunker near his house. Michael Shannon’s protagonist knows that he might be going crazy, but at the same time he doesn't easily yield to his paranoia. This conflicted personality is resonated in the actions of Blackshear’s protagonist Wyatt (MacLeod Andrews). The film opens on one of Wyatt’s recurring nightmare: he lies sideways facing his partner, whose face is cloaked in dark, resembling a phantom. Wyatt shows up in New York City at the doorstep of his old friend Christian (Evan Dumouchel). Wyatt’s long relationship with a girl has recently come to an end. And, after considering Wyatt’s damaged looks, Christian allows him to stay few days in his one bedroom flat. At night, Wyatt gets a call on his broken phone. A cryptic, mechanical voice tells him that the people around him are monsters and he’s one of the gifted ones to see this truth. The voice also warns him about a impending war between the monster species and humans.

Wyatt wants to save his friend Christian before the monsters take over him too. But, Wyatt is not the only one who’s hearing voices. Christian hears a different kind of voice – a motivational audio. He is working on a big, marketing firm and desires to gain a positive, dominating attitude. He feels that the soothing, encouraging female voice he hears in the earphone gives him the boost to become a hunk. Like Wyatt, Christian has also recently broke-up with his long time girlfriend, but he has worked up courage to ask out his boss Mara (Margaret Drake). Both have a tenuous grasp on reality: one listens to nightmares; the other to affirming messages. While Christian has got a better leash to control his internal struggles, Wyatt becomes a great danger to those around him. He gathers arsenal for the alleged doomsday war -- from axes, knives, and nail guns to sulfuric acid. Will Wyatt and Christian pair up to ‘save’ humanity from demonic invaders? Or will they come clean without succumbing to their rocky emotions?

“They Look Like People” works, thanks largely to the two central performances and due to the engaging chemistry between Andrews and Dumouchel. The insecurity, self-doubt, the fear of getting cold-shouldered, loneliness, and the frailty are expressed with wonderful nuance. Their argument over sock war, singing together an old song, and playful, mundane conversations are very relatable and poignant. The friendship between Wyatt and Christian adds a brilliant emotional weight, which escalates the tension at the narrative’s breaking point. MacLeod Andrews plays a typical ‘wacko’ role, but he imbues his character with a humanity that makes us feel for him, even when he’s slipping into erratic behavior. He marvelously showcases the pain of trying to be normal as the hallucinations threaten to discern his reality. A small mistake from the actor playing Christian would have turned him into an insipid, annoying character. But, Dumouchel does an amazing job in juxtaposing Christian’s earnest and silly behavior. A minor study of narcissism and over-ambition could be found in the way Christian’s character is written.

Director/writer Peter Blackshear doesn’t pretend to circumvent the genre trappings. He just makes the characters stronger and engaging so as to ratchet the tensions even from a predictable narrative arc. Despite a definitive conclusion and message, he’s able to withhold enough ambiguities. Wyatt is shown to be internally bruised without providing details of what ‘really’ happened. We find ourselves within Wyatt’s nightmarish visions despite the suggestions of schizophrenic behavior. We don’t whose car Wyatt has stolen (in the end) and what happened to Margaret. The director might have portrayed those afflicted with mental instability in a respectful manner, but still some may find fault in the depiction of schizophrenic behavior. The faults could, obviously, be overlooked since this film is an examination of trust and friendship rather than study of mental illness. It’s about two fragile souls, constantly under attack. It’s about an emotionally unstable individual grasping that the powerful weapon to eradicate his internal struggle is trust and friendship; not the arsenal of acid & knives (“It’s really scary to trust you right now. But that's what this is, so... trust me. Because I trust you”, says Christian to Wyatt in the film’s most vital moment). The emotional bruises we experience in this film are so real that we can relate it with our own existential quandaries. Technically, the film couldn’t shed that amateurish, home-made look, but it’s a minor quibble (the climax is filmed in a vibrant manner which is absent in many better-budgeted horror films).

“They Look Like People” (80 minutes) is an unsettling and poignant tale of people with fractured mindscapes. The enriching humane elements add depth & unusual interest to its oft-explored horror-movie material.