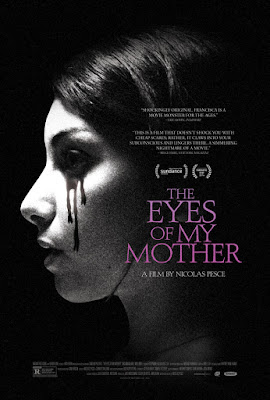 Nicolas Pesce’s masterfully crafted monochromatic images in The Eyes of My Mother (2016) tells the story of a mother and a daughter; a daughter who doesn’t know much about her mother but, still yearns to follow in (what she perceives as) her mother’s steps. Alas, the daughter doesn’t know she is falling into a irredeemable void rather than climbing up the steps. If “The Eyes of My Mother” sounds like a typical coming-of-age drama, I got to insist that it’s not. It is a disturbing psychodrama, pervaded with unnerving atmosphere of madness. It pushes you through the kind of horrifying movie experience which may either make you love it or hate it. The visceral reaction the first time director/writer Nicolas Pesce derives definitely won’t make us feel good as the end credits start rolling. I was little disappointed with “The Eyes of My Mother” since it doesn’t expand upon its thematic elements to become a truly powerful horror movie of the year. It’s neither an exploration of a human psyche nor offers social commentary. The cryptic quality ingrained in the narrative feels a bit thin towards the end rather than exhibit profundity. I think of this as the movie’s flaw since Mr. Nicolas doesn’t seem to be only interested in shocking the viewers or simply stay within the genre’s limited territory. Nevertheless, it’s an admirable American Gothic.


The Eyes of My Mother opens inside a giant truck. The truck driver hears a cheery song on the radio. He sees a woman in the middle of the road and gears it down to a halt. The camera is affixed inside the truck gazing outside. It kind of provides the claustrophobic, uneasily calm atmosphere that persists throughout the narrative. The woman lies down in fetal position in the scorching road. Who knows what horrors she has witnessed? Told in three chapters (‘Mother’, ‘Father’, & “Family’), this story of fractured minds & mutilated bodies then shifts to an isolated small-town American farm. The young nine or ten year old Francisca (Olivia Bond) is seen picking wildflowers with her mother (Diana Agostini), who was once an eye surgeon in Portugal. Now the woman only does gardening and housekeeping chores, gently nudging her daughter to be good and grow up to be a woman she once was. The mother also shows to Francisca on how to gently dissect a dead cow’s eyes, which she says is just like human eye (but only a bit larger). The stoic father doesn’t say a word and is always occupied with some errands. One day, a stranger in white-shirt and with an unsettling smile, visits Francisca’s house. This drifter named Charlie (Will Brill) brutally murders the mother. 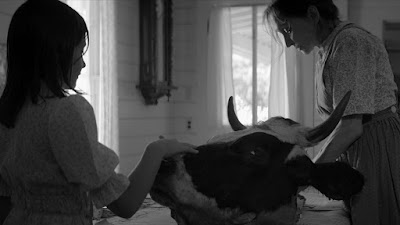 The murderer is captured by the father and he chains him in the barn. The mother is buried with the help of Francisca. The father is highly detached to take the role of a parent. The void inside Francisca gradually deepens. When Charlie asks to the little girl, “Are you gonna kill me?”, she replies, “Why would I kill you? you’re my only friend”. To keep this friend from running away and to make father feel proud of her, Francisca sews Charlie’s wounds and then perfectly sews his eyes & severs the vocal cord. The chapter ends with little Francisca dancing with her father, thinking that the void is filled. The static frame suddenly cuts to the next chapter. Time has passed. The little girl has grown to be a young woman (Kirk Magalhaes) and her father has just died. The adult Francisca bathes her father’s corpse and is reluctant to let go of it. The bony, naked, eyeless Charlie still lays in the barn, gorging on little food Francisca brings him. The young woman’s actions become increasingly senseless as she engages in casual torture to embrace a twisted normalcy. The narrative gets distressingly strange as Francisca lures in innocent people into her isolated house.


The lack of precise explanation and the big time gaps may either escalate the terror quotient or it may frustrate you, based upon your engagement in the story. It is better to approach The Eyes of My Mother as a dark fairy tale which doesn’t follow a logical path. Director Nicolas Pesce cites “Night of the Hunter” (1955) as his inspiration. Like that masterpiece, Nicolas’ script also deals with reaction of a family to emotional trauma. The perfect Gothic sets in Night of the Hunter imbues a very bleak tone, yet the proceedings resembles a fairy tale. The Eyes of My Mother is also a journey into a mythical dark tunnel, except that this tunnel is sealed on both sides, unlike the possibility of piercing light in Night of the Hunter. There’s no Lilian Gish-like character and the child (Francisca) never breaks away from asphyxiating loneliness. Nicolas Pesce doesn’t stop with the weirdly beautiful expressionist composition; he also revels in the body-horror elements, reminding the brutal vision of Takashi Mike. The strength of the film, however, is that it never immerses fully into exploitation flick territory. For the most part, the brutality and violence is only suggested. There’s only one sequence when you see someone getting killed on-screen. But even in this scene, you don’t witness the close shot of a sharp knife mutilating the body. You just hear the sound of knife plunging into human skin. These suggestions I felt are more disturbing than vividly detailed exhibition of torture. 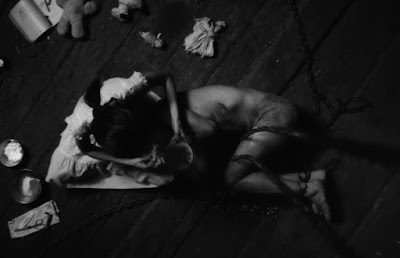 The sound design is absolutely flawless. It adds a lot to our terrifying experience. The sound of a shovel digging at wet ground; the sound of rattling chains as the blinded person moves forward; the sound of tortured prisoner walking through the grass-fields; the sound of a crying child; the sound of Francisca scraping the floor to get rid of blood stains – the sound haunted me as much as the well-crafted frames. Director Nicolas Pesce has also done the editing work. He creates the perfect disorienting factor when he suddenly cuts away from one static shot to another. This is an extraordinarily assured direction for a first time director. Even when the narrative takes some conventional or predictable turns, Nicolas’ crisp monochrome composition continues to holds our attention. As I mentioned earlier, the film’s flaw lies in its less profound approach in exploring the mislaid sense of morality. The director refers to Christian iconography whenever disturbed Francisca performs deeds, which in a way she believes to be part of divine being’s plan. The references lead to epitomization which totally lacks the depth. While this perceived flaw didn’t give me a wholly satisfying horror movie experience, it certainly doesn’t affect the pervading atmosphere of terror. Kirk Magalhaes’ (acclaimed dancer-choreographer) intriguing performance brought to mind the Angela Bettis’ haunting presence in the body-horror “May”. The subdued physicality Magalhaes imbues to her character makes adult Francisca a more complex being than the usual, thin portrayal of psycho girl.

The Eyes of My Mother (76 minutes) makes us feel like we’re stuck within a terrible nightmare or that we are witnessing something we should never have. Its inexplicable narrative may not appeal to those with a narrow-minded view about horror feature.

The Eyes of My Mother -- IMDb

at December 09, 2016
Email ThisBlogThis!Share to TwitterShare to FacebookShare to Pinterest
Labels: 2016 Movies, Horror