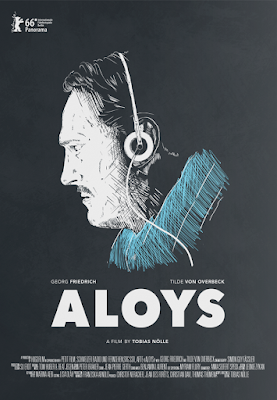 Don't we sometimes feel like we are trapped inside a box, the painful emotions slowly suffocating our thinking process? There would be an urge to scream louder; may be to not hear the screams from within; or may be to prove to this apathetic world that ‘I exist’. Whatever might be the reason, this loneliness, social isolation and uncontrollable depression grows day-by-day to finally push you deep into the unclimbable void state. You can stand among jam-packed crowd, but only the emptiness deep within reflects in the surroundings. You actively avoid the society and the society doesn’t care what you do. Swiss film-maker Tobias Nolle brilliant feature-film debut Aloys (2016) is an intimate portrait of one such alienated guy. For me, it is the kind of movie that’s easy to connect with and even makes me jump in excitement after looking at how the director has visualized the isolated feeling. Nevertheless, “Aloys” is not for all; definitely not for those expecting an entertaining mystery/fantasy movie. It is a distinct, profound study of a universe expanding and contracting within an extreme introvert’s mind.

I couldn’t understand the meaning of the opening sequence of shots in “Aloys”. Water gushes through kitchen-sink tap and the kitchen is empty with a wide open fridge. In what seems to be a living room, the camera sits in the corner. The frames are beautifully etched out and may be the tour around empty flat is to simply inform us on the life lead by protagonist Adorn Aloys (Georg Friedrich). Aloys is holding a video camera and filming the dead man, lying on a coffin in a big, funeral home. We learn that it’s Aloys’ father, although we don’t know the reason for his bizarre ritual of filming. The young woman at the crematorium recognizes Aloys from the past, but he scoffs at her and quickly moves away. He stands outside the crematorium with a passive look and this frame, shot from a distance, pins him within the vast, empty surroundings. We see a big cross towering the small building behind him. We feel that he bears a bigger cross inside. Aloys gets into a bus. He seems to be the only passenger. And, as the bus moves through the empty streets he looks out through condensed glass windows (a recurrent visual motif indicating his condensed world-view). Through these set of clear-cut visuals, Noelle perfectly immerses us into Aloys’ obscure, lonely world. 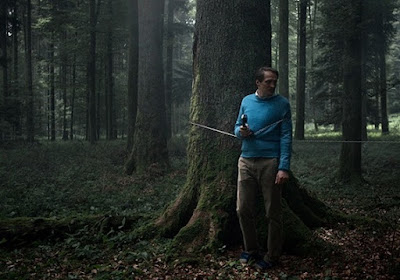 Aloys worked with his father as a private eye. He lives in a towering apartment block, avoids the company of others and films his subjects (who are all mostly adulterers). He returns home to watch the clips he made during the day. He has stored away a library of videos. Many include the videos of neighbors, his father and the magnesium-deficient cat. A fleeting smile escapes his mustachioed lips while watching certain clips, for example the video of father playing piano. When Aloys’ eyes move toward the empty bed of his father, the existential void expands. While this extreme introvert is going through this voyeuristic lifestyle, we too, with a similar sense of voyeurism observe his physical movements and inner melancholia. In his detective office, Aloys still says ‘we’ over the phone. It shows how he is reluctant to let go the 'dead' father. One day, he sleeps on the bus, only to wake up and find that his camera and the tapes are stolen. He receives a mysterious phone call from a woman, who sort of forces him to break out of the ‘watching’ routine to really interact. The woman says that she will give him the tape & camera if only he goes for a ‘phone-walk’ with her. She explains that 'phone-walking' is a method to rehabilitate the socially-withdrawn people. Initially, there’s a sense that the mystery caller is some angel trying to uplift Aloys. Gradually, we learn about the identity of soul at the other end of the phone, who is as  lost in the same pit of loneliness as Aloys. Will these anguished souls connect? Most importantly, can they overcome the unforgiving, dull reality to make a tangible connection (not just an ethereal one)?


The beautiful quality of Noelle’s “Aloys” is that the reality doesn’t relegate to the background when the narrative jumps into the magical realist territory. The imaginative realm is often invaded by the confounding moments of reality. “Everything that moves us is in our head” says the woman. Part of the narrative is about how big our inner universe, dreams and fantasies could be. It’s so vast than our perceptions & experiences of physical reality.  Nowadays, we are all part of a connected society, projecting a part of our 'self' in the virtual realm and gradually drifting apart from reality. Parallels could be easily drawn between ‘phone-walking’ and omnipresent social media. But, Noelle doesn’t use the narrative to just indict our increasing detachment from reality. He shows how such projections of 'self' in fictitious realm are sometimes vital to break out of the isolation and emptiness. The fantasy exercise brings out the deep emotions which Aloys didn’t know he had. However, to fully shatter the loneliness, Aloys has to use the newfound emotions to embrace reality for what it is. If he fails to make contact with reality, he may forever lose himself in the virtual world. And, however fantastic your imagination is, you definitely can’t lead a life by pushing out the reality. Being caught in a magical realist atmosphere is only gonna lead him to form of insanity.

The clash between projection and reality is elegantly depicted in the film’s second half. The approach, of course, reminds us the works of Charlie Kaufman, Michel Gondry, and Spike Jonze (the oft-kilter humor seems to be a tribute to Roy Andersson’s movies). Just like their works, “Aloys” is a melancholic love story, where the virtual space blended with hard-hitting reality threatens to derail the positive emotions between central characters.  And similar to their movies, “Aloys” is pervaded with a joyful intimacy which upends the layered sadness. The intimacy Aloys and Vera fabricate in the ‘party’ scene was so delightful, yet a suppressed sadness could also be felt.  At this point, the distant imagery slowly dissolves to get closer to the characters. We are no more an observer, but an fully embroiled, uninvited participant (like the fictional party-goers), fearing for the breach of this enjoyable illusion. The dialogues, although sounds simple has the inherent power to resonate with introverts. “Every party must come to an end, and left behind are lonely people, who then go to the next party. And to the next one. Each time a bit lonelier”, enunciates Aloys. This fear that you are going to be left out, despite your best possible efforts, is what makes introverts like us to perpetually withdraw into a shell.


Nevertheless, director/writer Nolle’s proceedings bursts with hope. It closes us with one of the great, wordless moments I have witnessed in a film this year. It is the kind of shot which made me alternately laugh and cry. I don’t know if Noelle’s intricate study of loneliness would have had the same impact if not for the two central actors – Austrian actor Georg Friedrich (“Piano Teacher”, “Wild”) and Tilde von Overbeck. Fantasy or reality, their showcase of emotions is captivating to watch. Nolle’s subtle approach in presenting their characters’ surroundings (Aloys’ environment looks bland, while Vera’s is darker, hinting at how she’s more lost than Aloys) also adds ample strength to the performances.

Aloys (91 minutes) is a visually superior and emotionally engaging study of alienation in the modern society. Those who are expecting a generic or plot-driven narrative would be sorely disappointed, but those who want to leave out the cinematic comfort zones to confront or analyze their own conflicting emotions would be highly rewarded. From a personal viewpoint, this film is as great as any Kaufman-esque works.