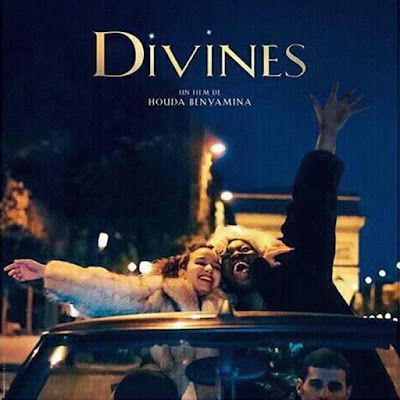 Dounia is like a cat. She passes in and out of dingy passageways and subways, secretly observing people. Dounia is like a tiger. She exhibits this incredible, intense rage when she is in danger of being ostracized. Dounia wants to be like a queen bee. She wants to be an illustrious motherly figure, protecting the most vulnerable. Most importantly, Dounia is an impoverished 15 year old girl, whose great desire to break away from the ghetto life often clashes with the unforgiving reality.  Dounia (played with crackling energy by Oulaya Amamra) is the young protagonist of French-Moroccan film-maker Houda Benyamina’s Divines (2016). The movie got a 10 minute standing ovation at Cannes and took home Camera d’Or prize for best debut feature. The premise of the film is instantly recognizable. The characters look like a much younger version of people we saw in Elia Kazan’s “On the Waterfront” or Martin Scorsese’s “Mean Streets” (there’s at least couple of references to Scorsese’s oeuvre – at the opening and ending sequences). The escalating migrant crisis in Europe and the dilapidated Parisian low-income housing complexes (Jacques Audiard’s Palme d’Or winning “Dheepan” had a similar setting) provides the perfect social context. But this being a European film, the primary focus is on emotions; emotions of a girl who loves, rages and strives for dignity. The racial discrimination and social inequality are omnipresent themes. However, director Benyamina vividly realizes the girl’s inner life, making it a universal story about friendship and freewill.


Benyamina’s Divines opens inside a small mosque (in the basement of a building) as group of people serenely chanting prayers. Smart & headstrong teen Dounia peers through a window and mildly disturbs the serene atmosphere by texting her best friend Maimouna (Deborah Lukumuena), who is sitting inside with her parents. This is the first of many disruptions Dounia causes; few leading to very bad consequences. . The director beautifully sets up the characteristics of the girls in the opening title-card sequence. The grainy snap-chat videos made by the girls are played, offering snippets about their life. We are instantly able to identify the joys and desires of these teenagers. Benyamina brings in the much-needed vibrancy through this simple montage sequence. Both the girls hail from a poor family of migrants. Their day activity includes dressing in burqas to easily shoplift in a Parisian supermarket. The Supermarket’s byzantine ducts and ladders end up in the fly tower of a theater. The girls sit there and joyously look down at the rehearsals for a dance show, which looks like hybrid between street dance and a ballet. 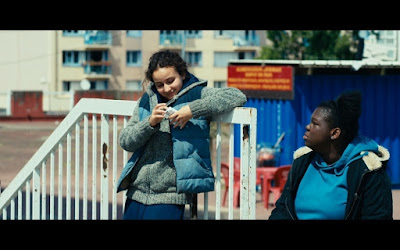 Although Dounia and Maimouna lead an impoverished life, we soon get to know the fundamental difference between them. Maimouna has strict, religious parents who provide her some sort of security and support. Dounia has none of that. Her mother’s alcoholic and promiscuous behavior have earned Dounia the nickname ‘bastard’. Dounia’s extended family of uncles and cousins live in the worst of refugee camps. She takes on the role of an adult, although in many ways she is vulnerable like a child. She hates others’ sympathy and vies for a life filled with money and success. In an earlier sequence, Dounia role-plays as a receptionist in the careers class. The teacher asks her to practice on conflict management skills. With arrogance and fierce intelligence, Dounia turns the table on her teacher, mortifying the poor woman. Dounia storms out of the class, swearing to never return back.


To rapidly climb up the ladder of success, Dounia chooses the only possible thing to do in the tough neighborhood. She proves her loyalty and smartness to the local drug-dealing gangster Rebecca (Jisca Kalvanda). Dounia gets an entry-level job, then later gets promoted to guard over a corner of the ghetto. The drive to escape from the circumstance pervades a fierce strength within the girl. But, Dounia’s vulnerable side peeks out when she gets attracted to well-built, aspiring dancer Djigui (Kevin Mischel), who works as security guard in the supermarket she shoplifts. As Dounia watches the dancer from fly tower, a side of her ignored womanhood comes to the fore. She warily flirts with Djigui who is taken aback by her beauty. Rebecca also wants Dounia to embrace her womanhood for entirely different reasons. The recklessness Dounia exhibits from then on pushes her into a darker territory, presenting the cost she has to pay physically and emotionally.


The female-centric thug life reminds us of Celine Sciamma’s “Girlhood”, although Benyamina’s vision is more gritty and rambunctious in tone. From a stylistic and narrative viewpoint, Divines couldn’t be contained within particular genre or theme. It mostly moves like a fireball, consuming all sorts of themes to burst out towards the finale. It’s a commentary on boxed-in society; a street-life survival movie; an observation of a kindred rebel spirit; a tale of touching friendship. The narrative flow couldn’t be contained in one direction as much as the movie’s heroine. Of course, the resulting tonal shifts aren’t always impeccably handled. But Benyamina, in her first feature-film doesn’t allow the erratic turns to upend our interest in the characters. She keeps on generating the energy from different scenarios and never forgets to deliver the much-needed gut punches upon viewers. From a visual standpoint, director Benyamina has brilliantly realized her protagonist’s universe. The series of ventilation ducts, back alleys, ladders, and the path it all leads to works as a good symbolism for Dounia’s emotional complexities. The dimly-lit portals that lead to basement to the fly tower of a theater invoke different set of emotions within Dounia. She exudes great strength in one and remains defenseless to conflicting emotions of love in the other. All these interiors speak of the girl’s desire to break out of the stymied environment. In one scene, Dounia takes a duct that brings her to backside of the mosque. She hears a soothing prayer chant, which doesn’t seem to be real. May be it shows the divinity that still remains alive within her. 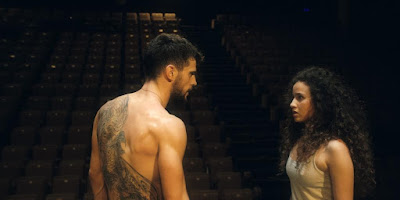 One of the most memorable sequences in the film is when Dounia and Maimouna imagine that they are taking a joyride around the town in their newly bought Ferrari. Benyamina uses Spike Lee’s signature ‘people-mover’ shot as the camera careens around catching the girls’ exuberance. Even though the way it is shot is a deliberately gimmicky, there’s an inherent charm that easily makes us surrender to such visuals. Director Benyamina’s camera offers the female gaze of muscular male bodies. The observation of Dounia and Djigui’s physicality shows the conflict between the characters. Djigui and his dance moves are all about letting go and being open to everything, while Dounia is reluctant to let go of her emotions by masquerading her feminine desires. The romance is kind of taboo, unlike conventional movie romance. The chemistry between them is so charged up and their encounters burst up with aggression and tension. Yet, Benyamina handles the precarious romance very well, never allowing the romance to reach a predictable arc. The director uses the possibility of romance to make us identify with Dounia’s constant struggle with herself. And, this sensual tension never lingers on bodies for prolonged time or uses close-ups to convey the inner struggle. I don’t know if this manner of channeling emotions through physical movements fascinates many viewers, but I like this kind of free-flowing dynamics.


Divines does struggle a bit because of its elementary story-line which isn’t as distinct as its visual flourishes. The gently drifting nature of the narrative turns into emotionally manipulative territory when the moral themes come into play. The manufacturing of the bleak situation towards the end seems inorganic. Although the director wants Dounia’s struggle to be reflected as a universal tale, she is caught up by the responsibility to deliver a social message (about European government’s treatment of immigrating minorities). The unsubtle social message doesn’t fit in with the sublime nature of the narrative. The generic conclusion, however, doesn’t dwarf our level of fascination about the movie. In fact, this imperfection will make us look out for Benyamina’s next well-honed feature. The central performances stay true to the movie’s title. Oulaya Amamra as Dounia -- younger sister of director -- is positively infectious, annoying, and poignant, all at the same time. There’s an amazing sensitivity in her performance that never allows us to write-off Dounia as a lost cause. This is a potential star-making turn for young Amamra and hope that she keeps her energy burning in the next movies too.