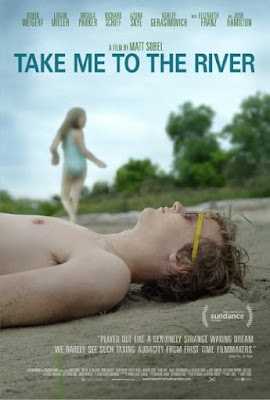 American Independent film-maker Matt Sobel who has made his feature-film debut with Take Me to the River (2015) said in an interview that the story for his film came from a ‘nightmare’. That rings true when we immerse ourselves within the narrative’s setting.  Sobel’s frame resonate the visceral sensation of getting trapped inside a nightmare. Each scene is brimming with an anticipation of terror, tightening our stomach and chest, although you don’t see any visible violence. Of course, Take Me to the River isn’t a horror movie. Nevertheless, we all know how a simple family gathering exercise could turn out to be the most horrific experience, as hate might seep through the smiling facade. Sobel includes a nasty twist into the familiar trope of family gathering. Middle-aged Cindy (Robin Weigert) returns to her family farm in Nebraska from California for a weekend with her husband Don (Richard Schiff) and teenage son Ryder (Logan Miller). In the car, Ryder says he wants to be open about his sexuality (his homosexuality), but Cindy requests him to avoid those subjects with his relatives.

At barbecue, all of the relatives are present, including her elderly mother and Brother Keith (Josh Hamilton). Keith’s daughters like Ryder’s drawings and each of them demand a picture for him to draw. The precocious one among the girls named Molly (Ursula Parker) gets attached with Ryder. The nine year old girl asks Ryder to take her to the nearby barn. She is warned not to climb up the hay bales, but she does it anyway, claiming ‘I do it all the time’.  Molly wants to climb on the hay bales to reach for the birds’ nest and she calls for her Californian cousin Ryder to climb up too. The shot is then cut to large family having lunch and few minutes later we hear Molly screaming. The frightened girl runs back to the house with bloodstain on the lower part of her dress. Ryder is perplexed, insisting that he didn’t harm her. He is also baffled when questioned what caused the bleeding. Cindy suggests premature menstruation, but Keith’s angry looks & outraged words towards Ryder spread the web of suspicion among all the relatives.

Mysterious harassment and incidents to alienate the Californian family happens soon. The unsettling atmosphere takes a more sinister turn when next day, Keith sends his daughter Abbey to invite Ryder for lunch. Abbey conveys her father’s apologies for his rude behavior the previous day. What follows is a brilliant cat-and-mouse game as Ryder takes up Keith’s offer. He rides a horse alongside Abbey and there’s a beautiful shot of sunflower field. As the horses glide past the field, we get the feeling that Ryder is traveling into a different world and about to learn some harsh lessons, despite his unassailable demeanor. What unfurls is more unnerving than a violent outburst. It all ends with a stark untangling of the past secrets, which when contemplated in a relaxed manner seems unbelievably depraved (and in turn lacks credibility). Even though I felt there’s something amiss with the denouement, it took some time for me to get out of this expertly constructed rattling atmosphere.

Matt Sobel asserts that his film is an ‘inverted coming-of-age tale’. While adolescent protagonists in those films discover self-confidence to pass through this tough rite-of-passage, Ryder’s character only ends up confused compared to the earlier confident-self. Ryder is not comfortable to go back into the closet and so wears the very short red-shorts, v-neck t-shirt and yellow sunglasses to put forth a distinct identity. His mother and dad state that his attire is inappropriate because the gathering is about being together as a family; it’s not about making a statement. Writer/director Matt Sobel circumvents our expectations of Ryder becoming a scapegoat for his sexuality. As the narrative maneuvers through tight corners, Ryder learns what happens isn’t about him. The dark familial past is referenced (Cindy’s casual statement ‘it’s all about family’ resonates in Keith’s dubious plan for a revenge). Like in the regular coming-of-age movies, the central teenage character learns that the world doesn’t revolve around him, but in the nastiest way possible. 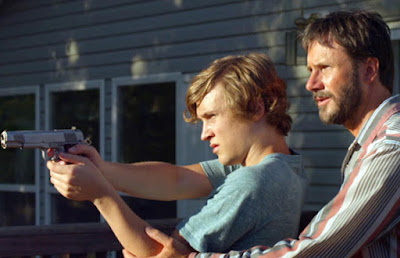 Credibility issues plague Take me to the River as we wonder why Keith wouldn’t allow even Molly’s mother to examine her or why everybody immediately arrive at the worst conclusion of sexual assault while the girl could have fallen down and I finally wonder why Ryder’s parents who fully believe in their son’s words allow him to take a unsafe journey. But, since Matt Sobel credits the story’s origination to a ‘nightmare where he was wrongfully accused’, the narrative too pretty much works with dream logic. You can either get frustrated by some of the decisions taken by the characters or just lose yourselves in the distressing atmosphere to take in the uneven logic. What’s insinuated in the hard-to-watch ‘chicken fighting’ scene and in the final revelation are depravities of the highest order. It is wise that director Sobel has opted to not spell out the exact answers. I feel uncertainty in piecing out the answers and couldn’t fully recognize some of the moral ambiguities. Ryder after the defining incident of the story utters ‘I don’t know’ many times. He is not the same guy who wants to rebel against the family. The viewers (including myself) are also kind of rendered mute like Ryder (or left in ‘i-don’t-know mode’).

Matt Sobel constructs aura of dread and paranoia solely through performances and layered camerawork. The moody atmospherics he creates are so robust that even a shot of beautiful fields and trees (cinematography by Scott Stanton) circulates a feeling of trepidation. Even if the bracing visuals don’t have the bite of Michael Haneke’s, it is up there with the brooding imagery of Lucrecia Martel (The Headless Women) and Ruben Ostlund (Force Majeure). The fantastic performance, among the great cast, belongs to character artist Josh Hamilton. As an intense redneck dad Keith, he creates an ever-lasting impression through his sharp confrontations. Hamilton keeps us on the edge, waiting for that explosion of temper. Newcomer Logan Miller excels in the role of bewildered Ryder. He effortlessly makes the transformation from being irritating, self-loving youngster to a sympathetic hero.

Take Me to the River (85 minutes) will surely frustrate and disturb a lot of viewers. It has a very slight premise to append the entire narrative and it is not always convincing. But, the adept directorial approach makes this one of the significant American indie films of recent years. Finally, it’s not the kind of film you would exactly recommend to a friend, unless he/she demands to experience the sensation of something clenching their heart.

Take Me to the River -- IMDb
at December 21, 2016
Email ThisBlogThis!Share to TwitterShare to FacebookShare to Pinterest
Labels: American Indie Films, Coming of Age Movies