In a movie universe that’s teeming with remakes, reboots or franchises, it is always refreshing to see the brainchild of a passionate, independent film-maker. Of course, one need to be bit open-minded in his/her taste for cinema to fairly appreciate these works. The strength of an independent film is that the director doesn’t do the thinking for his viewers; he/she doesn’t underestimate them. They just invite us to share an experience which has been conceived from deep inside their mind. In that way, Mr. Santosh’s surrealistic Indian indie drama A Pitch-Dark Diorama offers a good visceral experience for movie-lovers. If the film’s story line has to be squeezed into a single line, we can call it as observation of characters inhabiting parallel worlds, whose action reverberate across those different realms. It’s not exactly an original plot-line, especially if you have went deep into Lynchian universe or reveled in Murakami’s magical realism. But the finely-attuned diorama from Mr. Santosh provides one of a kind cinematic experience. 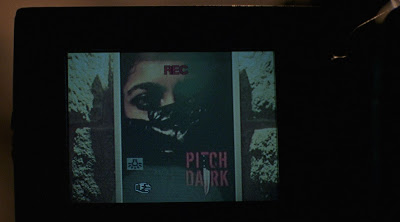 Troubled novelist Indranil Deashi has locked himself up in a hotel room to figure out the riveting ending for his much anticipated new thriller fiction. He thinks there would be peace in his life once he decided upon the climax. We know he is gonna get his peace; not the one he expects. Even before seeing Mr. Indranil on-screen, we get the information that he is long dead. His last novel ‘Pitch Dark’ is being refined and re-defined by a schlock writer Rajiv Dey, who needs to be at center to recover from his own downward spiral. He and the re-surfacing of Indranil’s last novel have already got the attention of pragmatic journalist. The movie opens with the Rajiv’s interview, briefly providing the backstory. Rajiv calls the book ‘a slasher killer thriller’. It makes us wonder if the statement is preparing us for what to expect from this film. In fact, the next scene makes us think that it’s indeed a slasher, mimicking Dario Argento. Nevertheless, its proceedings are far-reaching and twisted from the initial expectations.

A rising actress Shewta has been found brutally murdered. She has played the central role in slasher thriller ‘Pitch Dark’, made by old director with dubious characteristics. A detective tries to figure out the perpetrator of what looks like a crime of passion. Apart from the director, the detective sets his eye on Shweta’s co-star Aditya, a jealous boisterous guy. The detective’s hunt for the perpetrator is interwoven with the interview of Mr. Rajiv. In the film’s second-half, the narrative unexpectedly shifts to explore the events that lead to Shweta and Indranil’s sad end. Instead of being a slasher thriller, the narrative wades in between time-warped realms, where the characters are pushed deep into the rabbit holes. Some head-up towards light; some end up in pitch dark. 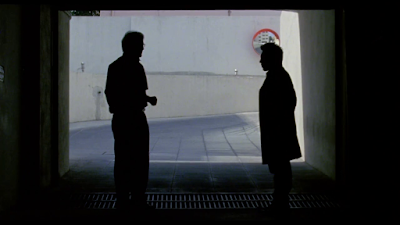 Even though the action unfolds in Bangalore, there is an otherworldly quality to the story. The independent movie doesn’t have the high production quality to create the workings of a crime scene. But, the eccentric behavior of characters and unrealistic nature of the set-up works well to keep up the surrealistic mood. Like the brilliant title design, ‘Pitch Dark Diorama’ is a Rorschach test for the viewers. It’s a projective psychological test which keeps us puzzled about the different perceptions. The narrative gives the enough space for viewers to bring their own perception on what it could all mean. Producer, writer, director, and co-editor Santosh has got a good-eye for details in crafting the distinct set-ups, painting them with shades of ink-black. The frames are exceptionally beautiful in the brief black-and-white sequence. Santosh and the cinematographer Karthik Muthukumar sees the action unfold from character’s eye-level, bringing the audience closer to these people’s inner struggle and wicked emotions.

The transition between the parallel worlds isn’t always smooth. There are some erratic tonal changes, which threatens to affect the overall mood. Nevertheless, the thematic flourishes keep us engaged. Apart from the skilfully crafted scenarios, the sound design and musical score remains as the biggest strength. It allows the uneasiness to subtly spread through each frames. For me, ‘A Pitch-Dark Diorama’ is a fine look at a creator’s alienation, which makes and also breaks him. The misogyny associated with this type of best-selling fictions is gracefully criticized. The women are treated as objects of desire within various, non-coalescing set-ups in the movie. The journalist says to Rajiv ‘your female characters are ridiculously tame’. The final ‘redefined’ version of Mr. Rajiv’s co-authored novel (full of tedious clichés I think) holds up the vision of subdued women (the female character gets killed when she doesn’t surrender to man’s desire). The ending portions were good. There’s no definite closure, but we get to observe the difference between fallacy and realism in the parallel worlds. The performances are uniformly good. Amit Ansshu’s performance as detective somehow stands out in my mind. He is definitely an over-the-top character with those pointed shoes and bandaged nose – a personality which adds a lot to the mood. He finely evokes the verve of old noir heroes. All in all, A Pitch-Dark Diorama is a compelling, dark indie movie which rewards us well for investing our mind in it.

Crowd Funding Campaign for the Film

at December 21, 2016
Email ThisBlogThis!Share to TwitterShare to FacebookShare to Pinterest