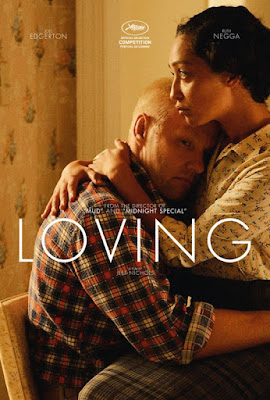 Jeff Nichols’ Loving (2016) opens with images of two people – a white male and an African-American woman – sitting together. She says, ‘I’m pregnant’ and we could see the ripples of joyful impact on the guy’s face. The frame widens a little to show the porch of the rural home this couple is sitting in a summer night, grazed by soothing air. If the first scene suggests a sense of place, the next scene conveys the era these lovers are living in. It’s the pre-civil rights movement era (1958), where the love between men and women of different races were seen with irritating side-glances. Director Jeff Nichols always has the knack of immersing viewers into the story without designing any major visual imagery or spelled-out context. He just simply focuses on the character’s unique, deeply personal moments so as to make the genre conventions into something very special. I felt that Nichols’ previous sci-fi movie Midnight Special (2016) to be the weakest film in his oeuvre. Yet, even in that film there are some interesting visual and sound designs, which many Hollywood directors aren’t capable of conjuring. In Midnight Special, Nichols sets up a terrific opening sequence by just using a car blasting through the dark road, armed with a pulsating musical score and impeccable sound design. The same thing happens in Loving: he uses sparse visual details to instantly and deeply root us into the narrative.

‘Loving’ tells the tale of Richard and Mildred Loving, a real-life interracial couple, who took their civil rights case to Supreme Court in order to challenge the State of Virginia’s miscegenation laws (law that enforced racial segregation at the level of marriage). In 1967, US Supreme Court gave a landmark ruling (Loving v. Virginia) that invalidated any state laws for prohibiting marriage between different races. This may be perfect historical movie vehicle to enunciate loud dialogues about American racism, to concoct an award-bait piece, and make few allegorical nods, comparing the 1960s with Trump’s America. Of course, Jeff Nichols is too talented director to make such a cliched drama. He makes sure to weave the story of ‘Lovings’ as the story of gentle heroes, but he entrenches that feeling without the help of big emotional speeches or exaggerated drama. The small, low-key moments showcasing Richard and Mildred’s love generates enough empathy to make us root for their rightful claim. 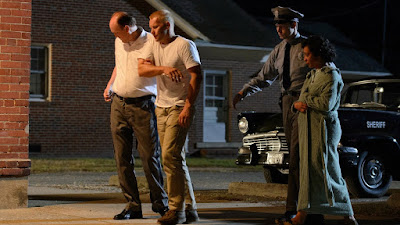 The narrative begins in a moderately integrated community in the 1950s American South (Virginia). Richard Perry Loving (Joel Edgerton) is romantically involved with Mildred (Ruth Negga) and when she becomes pregnant, he insists on marriage, even if they have to travel to Washington D.C. for the ceremony. One of the last vestiges of the Jim Crow laws prohibited interracial marriage in the state. Richard works in construction crew and buys a plot of land to build a new house for his wife. However, word gets about their marriage and the police break into the couple’s bedroom one night with flashlights to arrest them. The lawyer advises them to take a ‘guilty’ plea. He promises that the judge would suspend prison sentence, if they promise to not return to the state together for 25 years. The couple leaves their respective families, comforting rural land, and job to movie into a cramped space in Washington city.

Richard and Mildred once again get into trouble with the law, when they both return to the state for Mildred to have her baby. In the next five plus years, the couple lives a strained life with their three little children. Martin Luther King’s historical march gives enough hope for Mildred so as to fight for her own civil rights. She soon gets a call from American Civil Liberties Union (ACLU) and a lawyer named Bernard Cohen (Nick Kroll) is sent to work for them (with a promise that they don’t have to pay a cent). Cohen hopes to take the case to Supreme Court. In the mean time, Richard and Mildred move into rural side to stay closer to their families. They are burdened by the weight of the situation, while holding on to the unbridled mutual love.

‘Loving’ largely fascinates us due to its narrative approach and excellent characterization. Joel Edgerton ensures that Richard Loving stays stoic, monosyllabic, yet make him naturally convey his full range of love for Mildred. A tiny moment of Richard sitting by Mildred puts him arm around her or hugging her expresses a lot than the usual convention of righteous dialogues. Edgerton expertly converts his characters’ taciturn behavior into something heartrending. In the hands of lesser director or actor, Richard would have come across as ignorant, submissive Southerner. But Edgerton is able to showcase what are the foremost priorities for Richard: to take care of Mildred and his family. He doesn’t care about the attention they are getting around the nation or about the prejudice shoved at him or that they are about to make a big change in the constitutional law. As he says to Bernard Cohen after declining the invitation to Supreme Court (‘just tell the judge I love my wife’), Richard wants his simple notion of love to survive; he’s not after a grand political victory. Jeff Nichols’ men always remain intense and obsessive enough in their simple quest. The constant scanning of the horizon for anonymous threats is pretty much recurring quality of a Nichols’ protagonist.

Right after Richard and Mildred return to rural household, closer to Virginia, he keeps on looking at the empty path for invisible threats. Mildred’s reaction to the same scenario is entirely different. The camera closely studies her as the arched back (while living in the cramped city apartment) becomes straighter and with a quiet smile she breathes in the buzzing air of vast, rural landscape. Ruth Negga’s Mildred also uses few words to convey depth of her feelings, but boasts a quiet determination which works well in overcoming her husband’s doubt and reluctance. Unlike Richard, she very well knows what the fight and victory in the Supreme Court would mean to the other discriminated individuals. Yet, she doesn’t take grandstanding and her priority is also to ensure that their bond remains the same, victory for the cause or not. May be one might feel that their relationship lacked passion or may find it hard to believe that they never had an argument. It does get too discrete and restrained in order to eschew big dramatic moments or historical lessons. At times, the threat of violence seems more palpable than the suffering endured by the married couples. Nevertheless, I am not sure if little dosage of explosive narrative devices would have helped the story.

Yet another flaw in Jeff Nichols’ direction is when he occasionally panders to Hollywood style of suspense building (for example the accident in Washington or the final courtroom scene). Such devices break the Nichols’ carefully constructed organic way of storytelling. Jeff Nichols’ brilliant directorial skills are more evident when he is observing the characters’ sensitive emotional terrain. He gives a simple, yet effective introduction to lawyer Bernard Cohen: a dangerously optimistic and addicted to showmanship, although he is committed to the cause. Cinematographer Adam Stone, who had shot all of Jeff Nichols’ movies to-date, once again does an excellent job in capturing the Southern flavor and by focusing on the quiet elegance of the central relationship.

Despite the flawless period detail, ‘Loving’ (123 minutes) is less a civil rights era movie than a heartrending portrayal of true love. The organic narrative flow and astounding central performances makes it stand out among the similar historical American dramas.