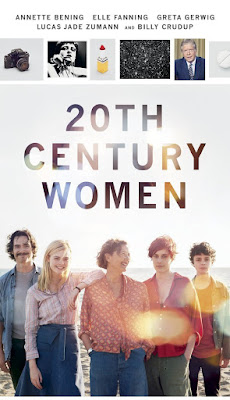 Multimedia artist Mike Mills belongs to the breed of film-makers who scrutinize and fictionalize their personal memories to weave an insightful study of familial connections. Although these are very personal narratives, there’s a genuine authenticity to it which we can relate with or at least understand. Woody Allen and Frederico Fellini are some of the great film-makers who had plundered their past to offer meditative, bittersweet movie experience. Mike Mills’ second feature Beginners (2010) was loosely based on his father (Paul Mills) and now the atypical coming-of-age tale 20th Century Women (2016) is based upon Mike’s mother, who had him at the age of 40 (in 1966). Mike’s father who ‘came out of the closet’ in his 70s didn’t have big presence during his son’s teenage years. His mother, two sisters, and other young women of Mike’s age helped him come to terms with adolescence. 20th Century Women is primarily a tribute to those souls who enabled him to carve his own path and embrace the creative talent. Nevertheless, the film isn’t just about Mike’s character named as Jamie (Lucas Jade Zumann). It has a decentralized narrative which shifts in perspective to provide a layered character study of the people shaping up 15 year old Jamie’s life.

The movie is set in 1979 Santa Barbara, California, the era of cultural upheavals, sexual revolution, and women’s movement. However, the upper-middle class household of 55 year old single divorced mom Dorothea Fields (Annette Benning) is largely untouched by those cultural forces. Dorothea and her teenage son Jamie seem to have led a calm existence. She thinks she has raised Jamie to be a thinking and caring individual. An indifferent act by the son makes Dorothea wonder how she should ease Jamie’s passage into adulthood. She asks herself ‘does it take a man to raise a man?’ But there’s no man in their life. The middle-aged handyman William (Billy Crudup) is too stiff for Jamie to connect with. So she asks two women in the household to help raise Jamie: a quirky, red-haired photographer Abbie (Greta Gerwig) renting a room in Dorothea’s big house; and a sexually active 17 year old Julie (Elle Fanning) – Jamie’s childhood friend and chief crush -- who occasionally sneaks into Jamie’s room to sleep and to offer excruciating details of her love life. 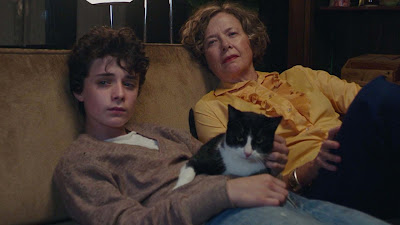 Dorothea, who wanted to be a pilot, works as industrial graphic designer. She is a broad-minded woman of the WWII generation. She wants to understand the new cultural forces and the new freedom or responsibilities it brings up. But at the same time she is little skeptical about these changes and wonder if it could threaten her son from becoming a ‘good man’. Twenty four old Abbie is recovering from cervical cancer. She has staunch feminist views, introduces Jamie to Judy Norsigian’s ‘Our Bodies, Ourselves’ and to punk rock music (Mike confides that Abbie is a composite character of his two elder sisters). The teenager gets a lesson on the frailties of a women’s body, on untidy, free-wheeling dance moves, on how to flirt with girls, etc. It’s a wholly different story with Julie. First of all, Jamie is in love with her, but Julie in order to preserve their unique male-female friendship doesn’t want to have sex with him. But it doesn’t stop her from telling him all the sexual escapades she has had. It turns out that Julie’s mother is a therapist who insists her daughter’s participation in the group sessions, where people open about their sexual lives and other dark emotions. It’s good to have William around as another boarder. He helps with the plumbing and re-models the old house, but the former hippie isn’t fun to be with. Director Mike Mills narrates the movie as if recalling an old memory. So Jamie’s little adventures or lessons move in a free-form manner, similar to the ways we recall an event from bits and pieces of stored memory. Jamie’s perspective is also often punctuated with the subjective perspective of three free-spirited women, who like all the modern women faces multitudinous challenges.

Director Mike Mills’ background in art school and jobs in graphic design and music videos has had a huge influence in the way he inserts distinct objects or texts into the proceedings. The shot of a burning car to commence the narrative was so interesting (the burning of car may signal the absence of masculinity in the story). The inclusion of stock footage and the strange French New Wave style experiment with colors, although are self-indulgent exercises doesn’t seem too intrusive. I particularly liked the meditative place each narrator occupies, when it comes to commenting on the people standing alongside them or on the rapidly changing social & cultural order. These small contemplative passages give me some space to collect my  own thoughts about the past. We can relate with Jamie’s attempt to explain his mother to others (that she grew up in depression era and World War II). Most of us may have tried to provide such insufficient or simplistic portrait of our parents. Writer/director Mike perfectly understands how superficial it would be if he tries to turn his movie into a portrait of an individual. While he weaves the complex and paradoxical nature of Dorothea, Jamie, Abbie and Julie, Mike never turns it into a rigid portrait of these idiosyncratic personalities. Jamie’s temperamental behavior sort of tries to find a simple definition for these women, but they are much more than a strong matriarch, staunch feminist and promiscuous teenage girl. The same kind of flexible writing goes in the characterization of Mike’s alter ego Jamie aka ‘artfag’. 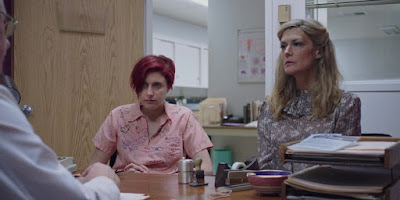 20th Century Women has some of the fascinating, ever-quotable dialogues among the recent films (“Wondering if you’re happy? That’s a great shortcut to being depressed”, “Men always feel that they have to fix things for women, but they're not doing anything. Some things just can't be fixed. Just be there, somehow that's hard for all of you.”). It must have been a difficult writing process, since a lot of materials (speeches, books, etc) are included to comment on the social milieu, while at the same the writer has to retain authenticity of the characters through the words they speak. Since there’s no conventional structure, the failure to find right balance between quirky elements and genuine emotions could have easily made the films less enjoyable. Mike Mills also allows a lot of improvisation because his films are lot dependent on the excellent ensemble cast. Annette Benning is brilliant as the worried mother, who is open to all possibilities. Whether Dorothea is chain-smoking or checking over stock reports or scrutinizing Julie or Jamie’s gestures, Benning turns her into powerful presence in the narrative. Fanning is just perfect with her unpolished performance and it’s always charming to witness little quirks of Greta Gerwig. The un-self-aware dance moves of Greta were just fascinating to look at (expressing the self’s pain and joy through free-floating body movements).

Like Dorothea or Jamie, we aren’t neatly separated from the past. Our fictionalized memory or the subjective reality is always influenced by the past. So the movie’s contemplation on the theme of personal identity, love, happiness, freedom, and feminism are as relevant as it was four decades back. Since our world hasn’t risen above casual misogyny, sexual violence or rampant material consumption, the near-void state and (metaphorical) ‘group hugging’ nature of the characters makes a lot of sense. Running for nearly two hours, 20th Century Women is definitely not for those who have an aversion for introspective cinema. For others, it will bestow an insightful and emotionally resonant movie experience.