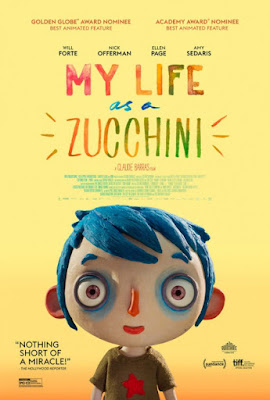 Nine year old Icare prefers to be called as ‘Zucchini’ (Courgette in French), the nickname the boy’s mother has bestowed upon him. The lonely boy stays up in his attic bedroom, expressing himself through inventive drawings. The father is absent, except as a superhero drawing in the boy’s kite. The mother has succumbed to alcohol and stays up in the living room. Zucchini goes around the house to collect his mother’s beer cans to make his own art. But soon the mother takes a fall; a kind of fall from which one doesn’t rise. He curls up in the attic’s corner with the colorful kite and empty beer cans as the only reminder of his parents and the possible kindness. Thus begins Swiss-French film-maker Claude Barras’ superb stop-motion & clay animation feature My Life as a Zucchini (aka ‘Ma vie de courgette’, 2016). The puppet characters of the movie have overlong limbs, big head, and big eyes, a face riddled with sorrow and trauma. The intention is to precisely show each subtle change in emotions which the pre-teen orphans can’t express through words. In fact, My Life as a Zucchini is about children who process incidents and emotions that are beyond their comprehension.

The stop-motion animation feature is based on Giles Paris’ YA novel Autobiographied’unecourgette (yet to be translated into English). The novel is said to be for grown-ups, which shows children at the receiving end of various tragedies. Alcoholism, abuse, deportation, and murderous acts have all victimized these kids. Claude Barras, who decided to adapt the novel a decade back, says the biggest challenge was to soften it without diluting the emotional reality. Barras achieves this through assortment of little details and brilliant suggestions. For example, in the prologue, the circumstance of the boy’s upbringing is established through little objects and frames drenching with quiet melancholy. Each unpolished, yet sumptuously detailed, shots brims with tenderness so that we empathize with the pre-teen characters rather than exhibit insincere pathos. 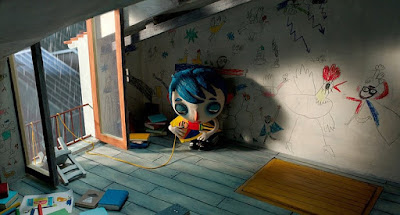 Despite the numerous tragedies intimated through the backstories, My Life is a Zucchini isn’t a dark film. Like the blue, clear sky that bookend the narration, the film is the story of kids working their way towards light. There are quite a few kind-hearted figures in Zucchini’s (voiced by Gaspard Schlatter) world: a fatherly detective Raymond, who drives the boy to orphanage and promises to visit him often; the caring foster-home director with hard facial features; the genial staffs Mr. Paul and Rosy who takes them on a picnic to snow-topped mountains. Of course, there’s also Simon, a bully with bright-orange hair, abandoned by his drug-addicted parents. But soon his buttons of compassion are pushed upon and Simon warms up to Zucchini to be part of the healing process. The parents of five other kids in the orphanage have suffered tragedies ranging from deportation to mental illness. The new girl Camille immediately catches Zucchini’s attention (a crush and a confidante). She is dropped off by her irritable aunt. Camille masks her trauma with an affable exterior outlook.

The incredibly expressive puppets and warm voice-work are the biggest plus of the movie. Director Claude Barras background as an illustrator has helped him to craft a colorful as well as a rough atmosphere. Each shot makes you admire the pastiche of colors and the tiniest of details present in it. The dark-circles in the eyes and red or orange-colored nose beautifully suggests the lifetime of tragedies. The big eyes works wonders in the scenes when the kids learn new, hard-to-stomach things about life. Nothing is rushed through. There’s an adorable scene where the kids enjoy their dance party. A shot zooms out from the party-lights inside glowing cottage, allowing our senses to fully seep in the kids’ delight. The unobtrusive direction also deftly balances the melancholia and sense of hope, never over-burdening the tale with sentimentality.

The polished, digital animation works (especially from Hollywood studios) have made us believe that animation is the apt medium to conjure cornucopia of visual delights. But animation can also be used to tell tales that are sometimes too tragic for a live-action feature. Case in point: Grave of the Fireflies (1988), Barefoot Gen (1983). It would be too demanding for a child actor to play the starved, diseased kid of war-time Japan. The tragedy would also be so overwhelming for the audience to get through it. But, Isao Takahata’s tenderly drawn images (in ‘Fireflies’) brilliantly convey the darker themes without ever overpowering or manipulating our emotions. The recent French animation productions like The Little Prince and Long Way North (both released in 2015) have followed the anime route of telling tragic stories with quiet power and minimalism. My Life as a Zucchini is yet another terrific example of using animation medium for an ingenious mode of storytelling. We can relate to the deliberate cartoonish movements of the characters with awkwardness and confusion we experience during the pre-teen phase.

I have only seen one French stop-motion animation feature titled ‘A Town Called Panic’ (2009). But, considering the excruciating process of making stop-motion & clay animation movie, I don’t think there’s many made in French. In the interview to filmcomment.com director Claude Barras explains how the small team of 10 animators worked for over a year to deliver this hour-long film (post-production took another eight months). The stop-motion works wonders for these tragicomic stories. Its rough qualities bring a kind of memorable realism to the proceedings. This realism elegantly fights off bleakness with compassion, barring the feelings of pity from casting its shadow. The script was written by writer/director Celine Sciamma (Tomboy, Girlhood) who impeccably renders the children’s perspective. Despite witnessing several horrors, Celine allows the kids to be kids, whose eyes widen after processing every bit of fresh knowledge and information. Some of the children’s interactions takes us back to the exchanges we had back in the good-old days (‘I love to open letters’ says a boy which I something I too desired as a kid). The kids’ funny as well as mistaken perceptions of the adult behaviors are also very relatable. The kids attempting to explain (through limited words) about ‘the thing boys and girls do’ (sex) is the narrative’s laugh-out-loud running joke. The adult characters are also excellently written, whose sense of love deeply rises from within.

My Life as a Zucchini (70 minutes) tells the familiar tale of innocent souls trying to figure out their place in this whole-wide world that’s equally filled with sorrow and love. But it tells this story on a very intimate level which enables us to put ourselves in these affectionate kids’ shoes. The result is a magnificent, bittersweet film for tenderhearted viewers of all ages.