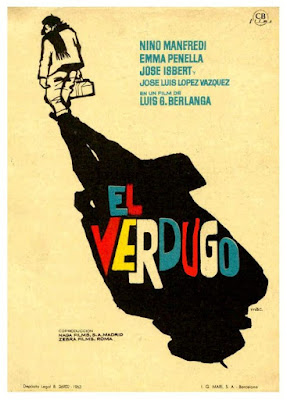 Luis Garcia Berlanga’s Spanish masterpiece The Executioner aka El Verdugo (1963) is a satirical indictment of the state bureaucracy and the violence it perpetrates with apathy. Director Berlanga was one of the most influential & vital Spanish film-maker of his generation. He endured the brunt of harsh censorship that marked Franco’s military dictatorship. Mr. Berlanga never confined himself to a particular ideology and until his retirement in 1999 he boldly addressed the moral decay of those in power. I haven’t seen any of the films Mr. Berlanga made after 1975 (after the death of Franco). However, among the great subversive films he made in 1950s and early 1960s, my topmost favorite is The Executioner.

After the scandal regarding Luis Bunuel’s Virdinia (1961), the Spanish government and censors did its best to stop the release of The Executioner. Yet, the film managed to slip past the censors to be screened at Venice Film Festival, where it won FIPRESCI prize. Franco himself condemned Berlanga as ‘a bad Spaniard; worse than a communist’. The oppression and rigidity brought upon individuals by the state authority, in the name of responsibility is what repeatedly explored through The Executioner. The film opens in a state prison as undertaker Jose Luis (Nino Manfredi) brings in empty coffin and waits for the execution process to finish. Jose meets the executioner Amadeo (Jose Isbert), a short, frail old man. Jose wonders how simple the guy looks that if he ever met him in a café, he wouldn’t have guessed about the old man’s profession. 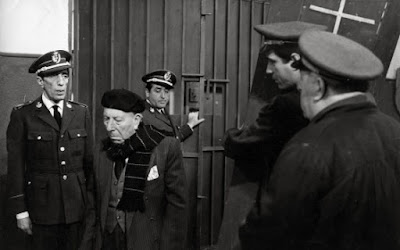 Jose, of course, doesn’t even want to give a lift to Amadeo in their van. Yet, fate lands Jose in Amadeo’s house where he meets the executioner’s daughter Carmen (Emma Penella). Jose dreams of going to Germany and be a mechanic. However, he soon gets entangled with Amadeo’s family. Jose eventually marries pregnant Carmen. Thanks to Amadeo’s forty year service, Jose may finally live in a three-bedroom apartment allocated by the state. But, the usual bureaucratic confusion threatens to rob the family out of their apartment dream. In order to keep the home, Jose is forced to follow Amadeo’s profession as the old man is about to retire.

Co-written by one of the prominent Spanish screenwriter and Berlanga’s long-time collaborator, Mr. Rafael Azcona, the script extracts lot of humor from strangely discomfiting situations. There are a lot of Kafkaesque elements in the way narrative observes the horrors of bureaucracy; it elegantly juxtaposes abnormal elements with the mundane. The dead pan humor could be enjoyed by viewers all around the world. The speedy verbiage adds a lot of colorful shades to the humor. It’s slyly funny when Amadeo observes how the modern criminals lack the bravery when they march for their death and also when he laments how the profession of an executioner is grossly misunderstood. The biggest strength of the script lies in the manner it clings to realism without being a full-blown satire or farce. Beneath the comedic edge, Berlanga and Azcona ingrain a humanist perspective, which puts us (like Jose) in a complete distressing situation towards the end. 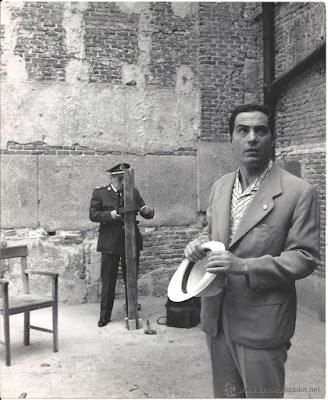 The most phenomenal quality of The Executioner is the impeccable use of mise en scene. In the majority of sequences, Berlanga opens the shot with activities of people, not particularly relevant for the narrative. The frustrated police officer in the prison who isn’t allowed to drink his soup in peace; driving the coffin from airport tarmac, followed by a line of black-clad mourners; the observation of tourist boom with the arrival of beauty pageant contestants, the aim is to realize the strictly-regulated domestic spaces, which propels with its own sense of logic. Director Belanger often visually hints at Jose being a man who hides from responsibility (the kind propagated by stringent bureaucracy). He nearly rejects to take the executioner’s bag; he hides when Amadeo arrives to find him in Carmen’s bedroom; he clad himself in a hilarious outfit to masquerade his profession. There’s nothing amorous in how Jose looks at Carmen. May be, he chose to marry Carmen to avoid a confrontation. In fact, Jose never confronts anybody. In the end, Jose is burdened with distressing personal responsibility; the one institutional authority imposes on him. Belanger often studies Jose’s face, full of desperate glances, to show how he is the perfect man to bear this dehumanizing logic of authorial figures.

There are many great visual gags which unfurls in the background, hinting at the absurdity of the situation. Jose’s wedding sequence is one of the most hilarious moments in the film.  Mr. Belanger’s light comedic touches in the earlier sequences pave way to more chilling observations towards the end. Jose’s life journey is sandwiched between two long shots: In the earlier shot, we see Jose the undertaker driving off the van from the towering prison compound, while in the other shot Jose is dragged off across a vast white-walled corridor to do his job. The final sequences raise some hard-hitting questions about state-sanctioned executions. The comedic characteristics are replaced with a more grueling realism in the final sequences. The strong sense of humanity resonates when prison guards and priest haul the executioner forcefully rather than the person who’s to be executed (the warden calling what Jose about to do as an act of mercy raises some vital questions about death penalty). Although the Italian actor Nino Manfredi is marvelous in portraying Jose, the man who signs off his life while eating cone, the veteran actor Jose Isbert happens to the scene-stealer. Mr. Isbert instills Amadeo with a banality and effortlessness that could very well resonant with modern viewers. He is one of the best grumpy old man characters in the history of cinema.

The Executioner aka El Verdugo (92 minutes) is an excellent, subversive dark comedy about the crumbling of personal dignity within rigid bureaucratic structures. Director Luis Berlanga’s acerbic eye for details makes this a must-watch.

Very elaborate and fitting movie review on 'The Executioner'..!
Congratulations.