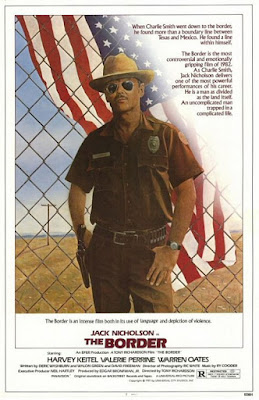 In Denis Villeneuve’s crime/thriller Sicario (2015), a meticulously crafted visual sequence depicts how wealth & peace (Texas, US) lays side by side with poverty & chaos (Ciudad Juarez, Mexico), separated by a thin border. The disparity we witness is absolutely distressing. Tony Richardson’s 1982 movie The Border was one of the rare, early films to address the same disparity between poor Mexicans and moneyed Americans. It connects the insipid consumerism and authorities’ (border patrol) lust for money with the worse treatment of Mexicans, attempting to cross into the ‘land of dreams’. The Border tells a simple story in a straightforward manner, providing neat resolutions for the characters involved. Yet, the subject matter is examined with sensitivity and for the two-thirds of the narrative the brooding conflict is well-staged. The other important reason to watch the film is Jack Nicholson’s performance, who completely immerses himself in the central character of an afflicted border patrol officer Charlie Smith. He brilliantly underplays in the role, keeping away his regular, time-worn antics.

The Border opens in a cathedral in Mexico as a young single mother Maria (Elpidia Carrillo) worships with her small baby, accompanied by her younger brother. A strong earthquake razes down the cathedral and other buildings of the impoverished town. Maria is left without a home and livelihood. Like the other residents of town, she makes an arduous trip to the United States. Charlie Smith (Jack Nicholson) is a middle-aged man with thinning hair, holding a dismal job position of an officer for the US Immigration Services in Los Angeles. When we first see him he is negotiating with the boss of a clothing factory on which one of the illegal Mexicans he should arrest to fulfill the quota. The boss who exploits the illegals by offering meager pay points out two Mexicans youngsters. Charlie detains them, reads their right in the most inexpressive manner. He is sure that the detained Mexicans will immediately make a trip back to do the same job. Charlie lives in a nondescript mobile-home with his scatterbrained, materialistic wife Marcy (Valerie Perrine). He has no friends and has learned to tolerate his wife and her declamations. She convinces him into transferring to El Paso, Texas. 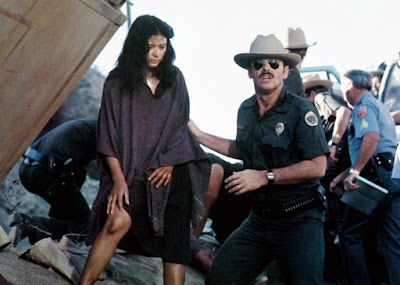 Marcy’s high-school friend Savannah has sent a brochure of a duplex, situated next to her house. Hoping for a change and to satisfy his wife’s needs, Charlie decides to move to Texas, despite the lack of savings. The couple are greeted by frivolous Savannah and her border patrol guard husband Cat (Harvey Keitel). Thanks to Cat, Charlie gets the same job. First day on the job, Charlie learns how the department is understaffed and lacks funds. He also witnesses the death of a veteran guard – shot and killed by dope-movers. Soon, Charlie understands this job is as ineffectual as his previous one. And, adding up to his woes, wife Marcy is intent on realizing their dream home, riddled with waterbed and swimming pool. She insists ‘we don’t have pay for this stuff’, failing to understand how they are one missed mortgage payment away from the dream turning into a nightmare. All she wants is to make Charlie happy and perfectly fit in the glitzy social circle. Things get worse when Cat wants to let Charlie in on the ‘deal’. The deal is to ensure the safe passage of illegals (aka ‘wetbacks’ or ‘wets’) into US to work for the shady businessmen. Each trip could fetch a lot of dollars and the patrol guards also have to ensure there’s monopoly on the human-trafficking business. Meanwhile, the young Mexican woman with the baby makes it over to the border and gets stopped by Charlie’s team. The pure beauty and innocence of Maria makes Charlie think that she is the only good thing in this sleazy world. He begins to empathize with her plight and silently vows to guarantee her peace and safety.
The film was made a year before Gregory Nava acclaimed independent cinema ‘El Norte’ (1983). While, The Border isn’t as trenchant examination of the immigrant experience as ‘El Norte’, it still boldly addressed a rare subject for an American mainstream cinema (shot on location in El Paso). Alas, the film’s low-key nature and lack of high-wire action sequences turned it into box-office failure. Over the years, the film has gained the ‘underrated’ status mainly due to the great ensemble cast, led by brooding performance from Jack Nicholson. British film-maker Tony Richardson, who made acclaimed features like A Taste of Honey (1961), The Loneliness of Long Distance Runner (1962), Tom Jones (1963), etc moved to California by mid 1970s. Mr. Richardson’s works were often about men with rebellious streak; the ones who fight for their personal freedom. For The Border, he collaborated with three script writers (Deer Hunter writer Deric Washburn was one of the writers). Director Richardson and his writers target the senseless immigration policies of the Reagan-era (which has only become more senseless nowadays). By moving to and fro from the unfulfilling materialism to gross exploitation of humans, Richardson zeroes-in on the twisted nature of ‘American Dream’. The hypocrisy of the so-called dream, designed out of rampant consumerism, is appalling: the prosperity partly derived from cheap labor/slave trade and through shady dealings between US authorities and master criminals. 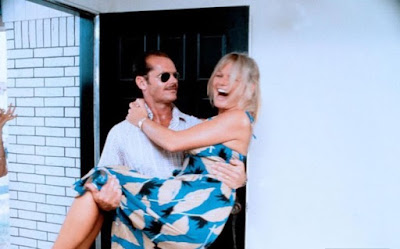 The film, however, travels in a pretty simple, conventional manner. As a mainstream cinema, the narrative is more interested in the salvation of its central character than in exploring the profound layers of the illegal immigrant labor ecosystem. And, that’s fairly understandable. Moreover, The Border is a low-key character study of a man, sick of amorality and greed around him. While Marcy’s idea of attaining the dream is centered on the accumulation of materials, Charlie just dreams of ‘feeling good about something’ (words he utters upon meeting Maria in her tin-roofed abode in one of the emotionally resonant scenes). The simmering conflict and the thirst for righteousness are masterfully expressed by Nicholson. Although the narrative trajectory becomes predictable in the third act, it never gets didactic or strays away from the well-etched realism (except for the final action sequence). Charlie’s quest is also never confined to sentimentality. Even though Maria is repeatedly symbolized like a divine figure, Charlie doesn’t take a path of senseless revenge to save her. The violence here is sudden and doesn’t pass off feelings of jubilation that the bad guys are down. He just wants to shake off the dirt from his conscience. May be the final image is too good to believe, yet it etches calm beauty that’s worth savoring.

The Border (108 minutes) is an earnest portrayal of a man trying to cling to basic human decency in an environment of corruption and indifference. It’s worth watching for the compassionate handling of the subject and for its emotionally affecting performances.

The Border (1982) -- IMDb
at April 05, 2017
Email ThisBlogThis!Share to TwitterShare to FacebookShare to Pinterest
Labels: Thriller