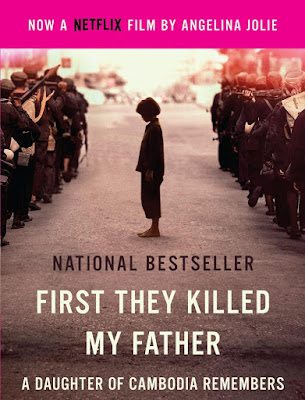 The 2015 drama ‘By The Sea’ was the most disastrous directorial venture of Angelina Jolie. Compared with this marriage-in-crisis movie, Ms. Jolie’s previous two renderings of true historical catastrophes – In the Land of Blood and Honey (2011) & Unbroken (2014) -- seemed like a monumental work. Angelina Jolie had long been termed as the ‘wild girl’ of Hollywood with the harsh spotlight of sex and drugs hanging above her. Despite truly earning the position of top celebrity do-gooder (a special envoy to the UN, spent more than a decade campaigning for the rights of refugees and went on awareness-raising trips to dangerous war zones like Syria, Myanmar, Iraq, etc), Hollywood often scrutinizes her flaws to step-up the hate-meter. Ms. Jolie has proven how largely different she is from the privileged brats or alleged do-gooders of Hollywood who are destitute of goodwill or genuine altruism. Without undermining Jolie’s truly subversive and genuinely humane side, however, one must also acknowledge the emotionally cold or distant nature of her directorial techniques. Her fragmented artistic strategies conjure fine visuals and extract reasonably good performances, but are also undeniably cliched and emotionally unsatisfying. Taking into account such conceptual and narrative missteps, Angelina Jolie’s latest directorial undertaking First They Killed My Father (2017) could broadly be deemed as her best work so far. She makes odd blunders and there are the usual questions about the ethics of aestheticizing genocide terror, but for the most part Jolie delivers the powerful true story with incredible restraint and moving emotional quotient.

First They Killed My Father: A Daughter of Cambodia Remembers was a non-fiction book (published in 2000) written by Cambodian author Loug Ung, a childhood survivor of Khmer Rouge’s terror reign which killed at least three million Cambodians. Loung’s poignant memoir starts from the days her siblings danced to rock music in Phenom Penh and gradually delves into the vortex of Pol Pot’s monstrous ideology which forced the 7 year old to become a child soldier. The heart of the film is Loung the child’s gaze. And director Jolie never forgets it as she clings to the devastating and fixed stare of her young protagonist. Angelina Jolie’s collaboration with Loung Ung in shaping the script and the inclusion of acclaimed documentarian Rity Panh (S-21, The Missing Picture) as a producer (Jolie’s adopted Cambodian son Maddox is listed as executive producer) makes sure that the autobiographical tale stays as a profound mood piece, braided with messages of warning and hope. Subsequently, the film is a well-focused and intimate vision of Khmer Rouge’s dehumanizing agendas.

Angelina Jolie somewhat eschews cultural appropriation and took the rightful decision to use local actors speaking Khmer language. Of course, her aesthetic approach is torn between paying tribute to Ung’s resilience and donning the role of a reporter examining the human costs of Khmer Rouge. She succeeds better in showcasing Ung’s survival than iterate the affecting details of Pol Pot’s legacy of terror. First They Killed My Father begins with Oliver Stone style montage with stock footage of Nixon sanitizing American policy on Cambodia juxtaposed with blitzkrieg unleashed on Cambodian civilians. Caught in the crossfires of American-Vietnam conflict (in early 1970s), some Cambodians believed in the deliverance promised by a radical communist movement. The historical video footage of Nixon’s ‘This is not an invasion of Cambodia’ speech insists how the violence that spilled into Cambodia’s borders indirectly led to the murderous regime between 1975 and 1979. 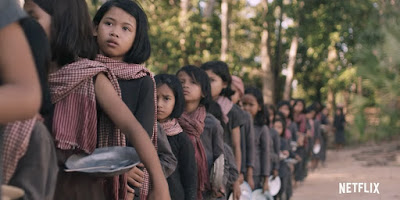 In the spring of 1975, Five year old Loung Ung (Sareum Srey Moch), her six siblings (three brothers and three sisters), government official father and housewife mother lead a fairly peaceful life in busy capital Phnom Penh. That is until the Khmer Rouge rebels sweep into the capital, and runs out the city’s entire population into the jungles. Ung has the universal qualities of a child who has grown up in warm-hearted family: curiosity, empathy, fear, and confusion over inhumaneness and death. Actor Phoeung Kompheak turns in a brilliant graceful performance as the titular father, who does his best to quell the children’s concerns. His eyes stay tender and reflect unbridled love despite the radical shift to dictatorial terror. Furthermore, it’s a good decision to not have included a voice-over or elaborate opening titles to explain the political details. Jolie & Ung decides to keep viewers in the state of bewilderment similar to that of their child protagonist. Jolie and cinematographer Anthony Dod Mantle’s creative flourishes frames the initial march away from the city through aerial shots, hinting at how Khmer Rouge saw the swarm of people as the disposable tools to achieve its agrarian utopia.

In order to evade execution for being loyal to the previous regime, Ung’s Pa passes himself as a worker and often warns his children to not reveal their true identities. After reaching the disparate labor camps, the family builds their straw and bamboo house. Khmer Rouge starts from the usual communist ideology of abandoning private assets but further ramps up its oppressive mood by mandating that everyone should wear clothes the same shade of black. Everyone, including the children, is forced to work in the fields, emotions are considered a weakness, and the idea of private space is non-existent. Despite harvesting bumper crops, the families are given the same quota of gruel. Loung Ung who doesn’t understand this relentless torture on farmlands often ponders in her head-space, conjuring vivid dreams about feasting from a smorgasbord. The more disorienting and harsh the child’s life becomes, the more fanciful the dream imagery becomes. After the act that’s hinted on the movie's title happens, Loung Ung and her sibling get separated from Ma. Loung is recruited as a child soldier. She learns to plant land mines and fire automatic weapons to massacre the Vietnamese ‘cockroaches’. 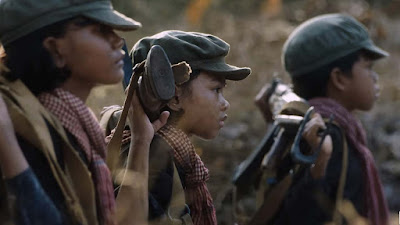 Director Jolie’s predominant aesthetic flair includes steadily moving point-of-view shots or over-the-shoulder shots, crisply capturing Ung’s disbelief on what’s unfolding. The narrative structure is designed around the escalating series of events that disunites the family. But Jolie’s perspective doesn’t remain exploitative or unnecessarily linger around for melodrama. The frames of Ung’s shell-shocked stillness serve as vivid form of contemplating the sadness and helplessness. Mantle’s cinematography (Slumdog Millionaire, 127 Hours, Antichrist) are expressive and astonishingly beautiful without being flashy. Although the visuals are par excellence, Jolie at times employs too much of free-flowing Malick-ian shots to create meditative effect. These shots of sunlight streaming through densely populated trees, of placid faces assimilating the horror gets repeated much too often to become profound emotional force. Nevertheless, there are quite too many commendable directorial decisions. For example, she doesn’t amp up the misery of Ung’s predicament by relying on teary eyes or slo-mo shots or orchestral strings. The inevitable departure of Pa is effectively staged without relying on external factors of music or dramatized acting. We just see a restrained and assuring smile from Pa as he walks to meet his fate. There’s assortment of devastating visuals which includes the shot of Loung and her fellow child soldiers standing in waist-deep water holding Ak-47s behind the shoulders, while getting battered by the rain; and the menacing aerial shot of Ung trudging through mine-field.

May be Jolie’s film doesn’t boast the particularity and intimacy of the befuddled or haunted child’s gaze, witnessed in masterpieces like Rossellini’s Germany, Year Zero (1948), Rene Clement’s Forbidden Games (1952), Victor Erice’s The Spirit of Beehive (1973), Guillermo del Toro’s Pans Labyrinth (2006), etc. But she doesn’t use the desperate situation of a child for making aesthetically pleasing set-pieces – as done in Cary Fukanaga’s Beasts of No Nation (2015) which barring such flaws is otherwise a sobering portrayal of a boy soldier. Perhaps Jolie’s visual grammar is still very limited (which alternates between close-ups, wide shot & aerial shots and flashes back to visuals of better days, although the imagery here is far accomplished than previous efforts) compared to the vision of those cinematic masters. Yet, this film keeps us devastated and kindles some interest on the next movie project Jolie the director embarks upon..

at September 19, 2017
Email ThisBlogThis!Share to TwitterShare to FacebookShare to Pinterest
Labels: 2017 Movies, Based on True Story, Hard-Hitting Movies